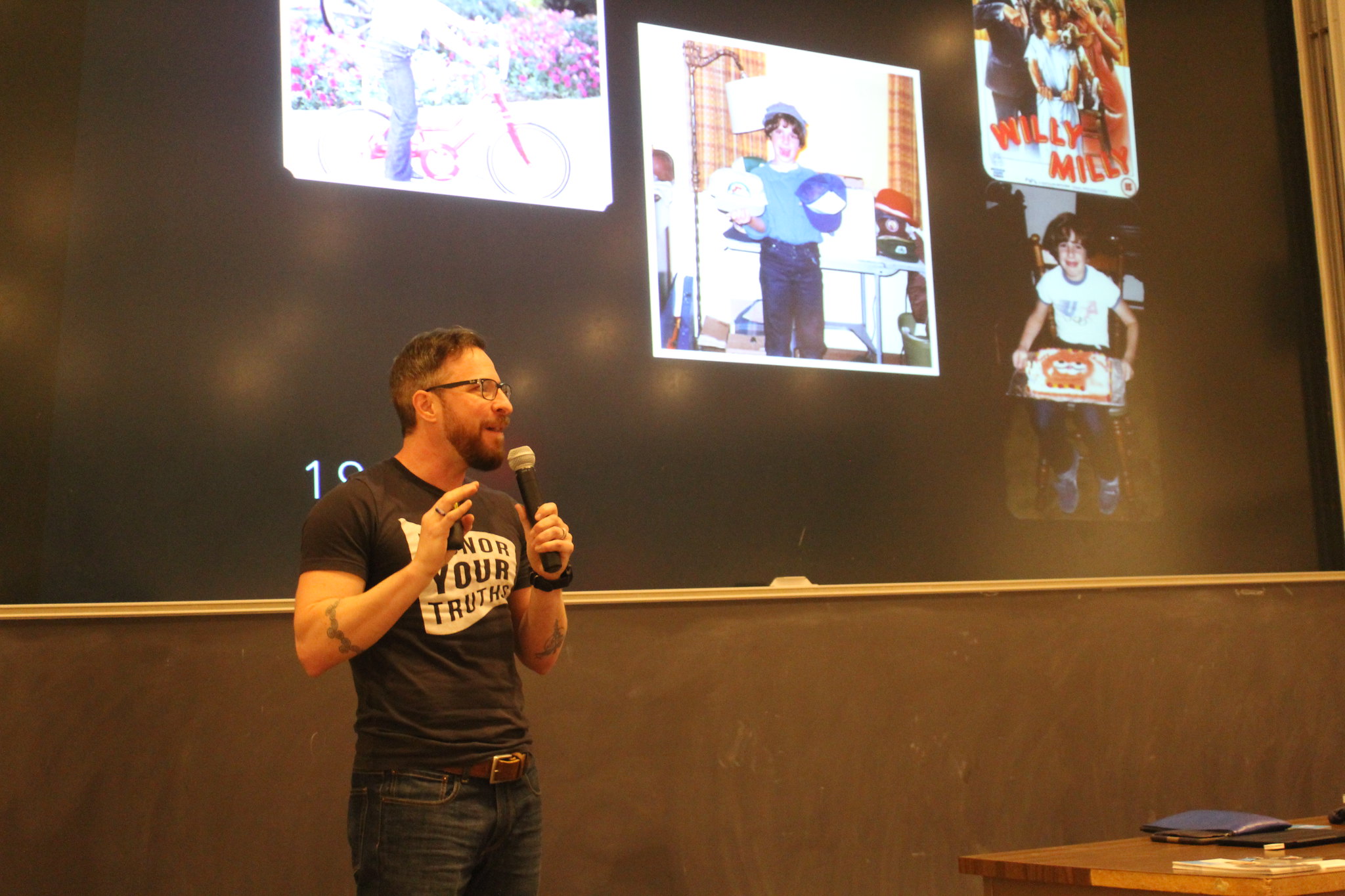 Emily Morgan/THE
REVIEW
Ryan Sallans, a transgender man and LGBTQ rights advocate, told students they have to be faithful to who their inner truth.

At seven years old, Ryan Sallans saw his reflection and wanted to kill himself.

It was the first time the desire washed over him, but far from the last. Looking in the mirror, he saw someone staring back at him that he didn’t recognize or want to be. For the first time, Sallans realized that the world saw him as female.

“Before that, I didn’t really understand it,” Sallans said. “I thought I was Superman, I thought I was Elvis, that I was Indiana Jones. It just hit me that my body was female and I suddenly became extremely scared.”

Sallans was born in 1979 in rural Nebraska with an assigned sex of female. For 25 years, that’s how he lived his life — all the while struggling to reconcile his exterior femininity with the male he was inside.

He said the path to where he is now was a difficult one, marked with body dysphoria, anorexia nervosa, depression, coming out, anxiety and the constant fear of not being loved.

On Tuesday, Sallans spoke to an overflowing audience of university students at Kirkbride Hall as the keynote speaker for the fourth annual Promoters of Wellness Speaker Series. Sallans stood in front of the audience as a husband, LGBTQ rights advocate, eating disorder survivor and a proud transgender man. Sallans encouraged the audience to explore the discomfort that comes with being vulnerable and to embrace fear that can come from acknowledging emotions.

“When we share stories we actually can help save lives and change lives, because through storytelling we can move past labels and get to the complexities of who we are as as emotional human beings,” Sallans said.

Sallans was the first speaker of 2019 Spring Speaker Series, which brings influential speakers to campus to educate students on different aspects of wellness and health. Nicole Lovitch, one of the event organizers, said the goal of the series is to introduce students to aspects of wellness prevalent in today’s society with unique and creative perspectives.

“For Ryan, I just thought that the topics he’s going to be talking about, eating disorders and body image issues, they’re definitely a very prevalent topic on a college campus,” Lovitch said. “Also, I think a lot of people don’t really know much about transgender issues, so having Ryan here could start to change that.”

The event drew a large crowd of students, with many standing in the back or finding impromptu seating on the stairs due to the lack of space. Students came for several reasons, with many interested in the topic of LGBTQ+ rights and others interested in learning about exploring their own gender identity.

Austin, a senior studying cognitive science who identifies as transgender, viewed the event as an opportunity to learn more about their own options in transitioning and identifying resources both on and off campus.

“I’m transgender myself, and I also struggled with an eating disorder, so seeing a speaker like Ryan, it’s just really important to me,” Austin said.

Sallans chronicled his entire journey, sharing the highs and lows that have changed not just who he is but how he views the world. To students questioning their gender, their confidence or their place in this world, he gave one huge piece of advice: Honor your truth.

“It takes a lot of insight into your feeling, and exploring those feelings and not running away from them, not being fearful from them and not worry about what other people think or trying to fulfill what other people think about you, it’s a process,” Sallans said. “It’s about just really being you and not judging people for who they are, or how they express themselves.”