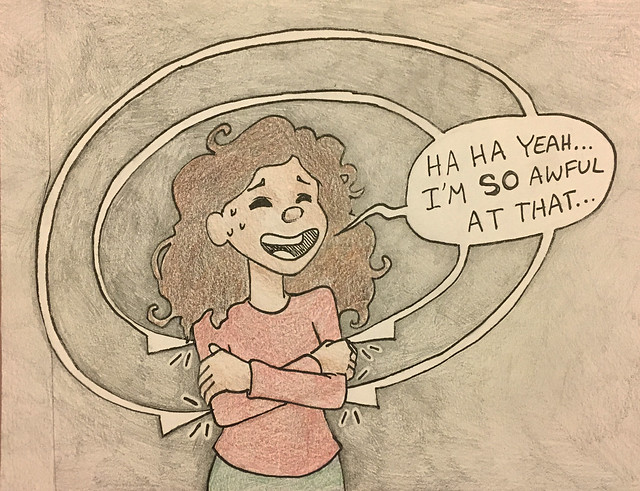 SAMANTHA FORD/THE REVIEW
Kantor believes that when used for the wrong reasons, self-deprecating humor can be “unhealthy” and slow personal growth.

Asking any comedian or lover of comedy how they feel about self-deprecating humor leaves one with a confusing array of answers, most ranging from vehement opposition to enthusiastic acceptance.

“It’s one of those things that’s a staple of comedy,” Holden says. “It makes the audience more comfortable if you make fun of yourself before.”

On the contrary, Ari Kantor, a freshman who is a mass communications interest major, does not share Holden’s enthusiasm and belief in self-deprecating humor. Instead, Kantor, who is a member of an on-campus improv group, The Rubber Chickens, has lukewarm feelings toward the comedic form.

“It sounds cheesy, but improv kind of reflects how we act on a day-to-day basis,” Kantor says. “We act, we justify and we live with whatever happens. A lot of the time, all self-deprecating humor does is emphasize an insecurity. You can’t respond to it.”

Kantor also notes that he has found self-deprecating humor to have a psychological effect on its users. He recalls experiences of being an “edgy tweenager ” and making jokes of his own insecurities before anyone else could make them. According to Kantor, making a joke for the sole purpose of having someone in the audience negate it for you is unhealthy and doesn’t support growth as a person.

“I mostly try to touch on things that college kids go through, because that’s my main audience,” Rosenfield says. “I think a lot of the things we joke about is kind of what everyone is going through. That’s what makes the joke work.”

Ultimately, there is no consensus on whether or not self-deprecating humor is simply a crutch for insecurities or a genuine comedic form. However, most comedians agree that it is up to the personal preference of the user and the tasteful execution of self-deprecating jokes.

“If it’s what you like to do, and it makes people laugh, keep doing it,” Rosenfield says. “Try to use is as a motivation to improve yourself instead of getting down in yourself all the time.”

Disclosure: Dan Rosenfield is a Senior Sports Reporter with The Review.