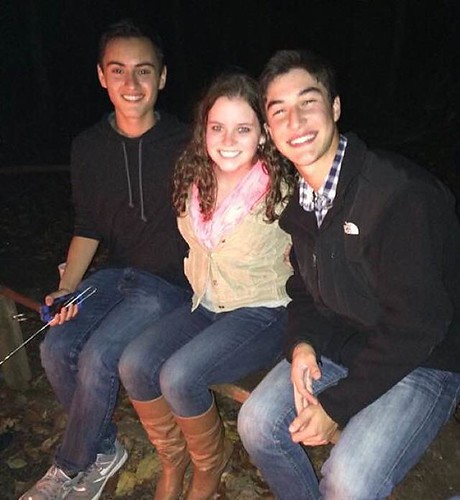 Courtesy of Matt Rocha
Matthew Rosin is pictured on the left with friends from SCPAB.

Music performances screeched to a halt Friday evening on the Trabant University Student Center patio when sophomore Matthew Rosin was hit by a cyclist.

At around 4:40 p.m. a biker heading from Main Street toward East Delaware Avenue struck Rosin, senior Matt Beer said. Beer—a lead singer and guitarist for The Rodjects—was performing with a friend at the time of the accident and said he initially just thought a biker had toppled over riding through the scene.

But then he saw Rosin on the ground.

“I was really worried,” Beer said. “A lot of people were freaking out.”

Rosin was lying in the middle of the walkway, Beer said, and for three minutes it seemed like he was not breathing. He watched as people performed CPR and within 20 to 30 minutes he was taken away on a stretcher.

The performances were sponsored by Student Centers Programming Advisory Board (SCPAB), a registered student organization Rosin is heavily involved in and why he was at Trabant.

In an email acting President Nancy Targett sent out Monday at 3:15 p.m., she informed the university community that Rosin remains in critical condition at Christiana Hospital after sustaining a brain injury.

Rosin’s mother has been posting updates on Facebook for those concerned about her son’s well-being. According to her posts, Rosin has undergone four surgeries, including two on his skull—two pieces of his skull have been removed to relieve the pressure in his head.

Rosin has been exhibiting positive signs more recently, according to her posts, as he moved his toes during a pain assessment. He also coughed. She said the doctors say her son is on a “roller coaster” right now and while bad things happen quickly, good things happen slowly.

Close friend and fellow sophomore Matt Rocha met Rosin last year through SCPAB. They bonded over their same first name and their “Ro” last names, and the fact that they both lived in Redding Hall.

Rocha said Rosin is the sassiest person he knows, and he is always trying to get a laugh. As a programmer for SCPAB, he is able to get many volunteers for events because his personality is so infectious.

“Matt always has a smile on his face,” Rocha said.

Rosin is an honors student majoring in psychology and marketing. Rocha said Rosin was undecided freshman year. His current passion is psychology, but he also loves the advertising business. Rosin plans to get his masters in psychology.

His birthday is this week, and he was also on track to start a new job as a technician for the student centers Monday.

Rocha first learned of the collision Friday around 5 p.m. through texts while at band practice. He did not know the student who was hurt was his friend until approximately 20 minutes later.

While he had been concerned before he knew who it was, that was when he began picturing Rosin lying injured on the ground. He was on the field practicing with 350 fellow band members and had to push his feelings aside, and then his family arrived for Parents Weekend.

“It wasn’t really until last night after my parents left that I was actually able to process what had happened,” Rocha said.

Facebook says it all, he said, and everyone can see how Rosin has impacted so many lives from all the activity on his page.

Rocha said in the short year of knowing Rosin, they have become great friends. He considers him one of his best friends.

“His smile is not fake, it is the most genuine,” Rocha said. “I can’t wait to see it again.”