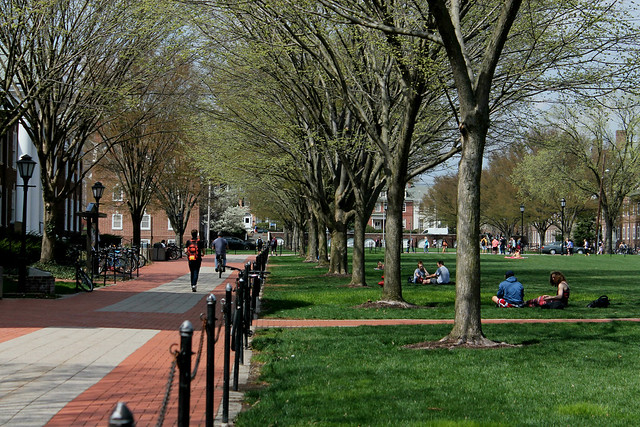 When Communications Professor Jenny Lambe presented a lecture in front of students Wednesday night, many screenshots of examples of hate speech popped onto the screen.

“It was hard to pick which one to use for him,” Lambe said of choosing one of Donald Trump’s many controversial tweets to include in her presentation.

Lambe defined hate speech as any “expression that attacks individuals or groups because of their race, ethnic background, religion, gender, or sexual preference.” While she did admit that we are seeing a lot of hate speech in this political climate, the reality is that there is little that actually can be done.

Lambe’s talk, entitled “The Problem of Hate Speech,” was part of the Political Communication Lecture Series, which is just one component of the university’s programming to educate and inform students about issues involved with the upcoming election.

Examples of directly-targeted hate speech include the actions of the notorious Westboro Baptist Church. The group is notoriously homophobic, anti-government and anti-minority, and protested at the funeral for Beau Biden and some of the Pulse Night Club shooting victims in Orlando. The group also has picketed military funerals with “Thank God for Dead Soldiers” signs.

Lambe also revealed that individual hate speech occurs just as frequently thanks in large part to publicity on the Internet. When Malia Obama announced that she would be going to Harvard, a random person tweeted and referred to the first daughter as a “little ape,” and that tweet went viral.

In her lecture, Lambe discussed that while the government could restrict hate speech, it is far more complicated than that. Asking our government to restrict speech would be a direct violation of the First Amendment.

“We’re asking them actually to restrict the content of the expression and that is a huge trigger for the First Amendment to come into play and people’s right to free expression,” she said.

“I don’t think the government should ever tell you what you can and cannot say, but I still think you should be held accountable for what you say,” she said. “I guess the only way to hold someone accountable, especially in this election, would be to not elect the candidate that frequently uses hate speech.”

Hate speech in American politics is nothing new, but Lambe said she believes that the hate speech spoken by Donald Trump in particular can be rooted back to issues from our nation’s past.

“I do think that President Obama being elected sort of ignited some sort of deep-seated something in our country with slavery and so now a black man being elected president revealed some of the underbelly and Trump is just feeding off of that,” Lambe said.

Although hate speech is never going to disappear, industry self-regulation and enforced policies by companies could successfully limit hate speech, as opposed to government regulation, Lambe said. Facebook and Twitter already have policies on hate speech. Advocacy groups like the Southern Poverty Law Center as well as individual efforts have potential for huge impact.

Perlman said she believes that individual efforts and cyber-vigilantes have the power to make a difference.

“We have the power to make sure that hate speech does not become a part of our politics,” she said.