SPOILER ALERT: “WandaVision” is a masterpiece by Marvel 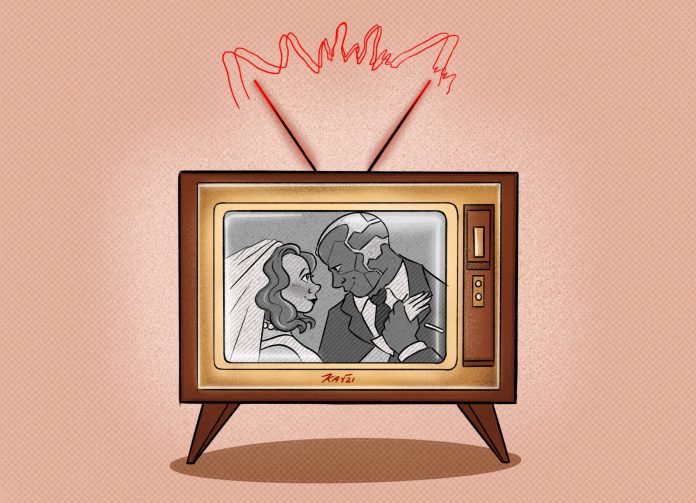 On the morning of Friday, March 5, I woke up early to watch the epic conclusion of Marvel’s “WandaVision” on Disney+, starring Elizabeth Olsen as Wanda and Paul Bettany as Vision. I, like many, am a huge fan of both Marvel films and classic sitcoms, and this short series definitely did not disappoint.

The series is composed of nine episodes, many of which pay homage to different decades of television — the first two episodes are even in black and white, representing the 50s and the 60s. In them, we see two beloved characters, who definitely were robbed of a happy ending in “Avengers: Infinity War,” get the charming and quaint life together that they deserve. How exactly they have achieved this, however, is not clear until much later on.

I will say the first few episodes lack a bigger plot and focus solely on the old sitcom side of the show, though Wanda did give birth to twins which seemed pretty major. Regardless, I know several people who did not appreciate these earlier episodes, even though I personally thought they were adorable; I liked making my own theories about how Wanda and Vision built this life together (not to brag, but very much to brag — I predicted right).

By episode four, the sitcom aspect is out and Marvel is in. We watch as special agents, scientists and other experts try to figure out what is happening inside Westview, which is the small town in New Jersey that Wanda has accidentally hijacked (but more on that later). We also learn more about Monica Rambeau, an agent for the made up organization S.W.O.R.D., who develops her own powers during the series; Marvel fans may also recognize her from “Captain Marvel.”

The agents eventually figure out that Wanda is using her powers to create a life for her and Vision in this small town. The issue, however, is that in order to do so she has to control the minds of everyone that lives in Westview.

By the end, we learn that she did not do any of this on purpose. After Vision was killed by Thanos in “Avengers: Infinity War,” she has lost everything; he was the last thing left that she loved after losing her parents when she was young and her brother in “Avengers: Age of Ultron.” She travels to a home it seems Vision has bought for her, as there’s a property deed with the heart wrenching message “To grow old in -V.”

Fueled by her sadness, Wanda’s powers took over, creating this small little world for herself and bringing Vision back with the piece of the mind stone that exists in her. Yet, we would have never known this without perhaps the show’s biggest plot twist — the harmless, nosey neighbor is actually a witch named Agatha, and she draws the truth out of Wanda.

By now, you are probably realizing that this show is not very ideal for people who are not already familiar with Marvel movies. While it is certainly still watchable without prior knowledge, there are many significant moments that someone who has never seen a Marvel movie before would not pick up on. Before watching, I would recommend at least watching “Avengers: Age of Ultron” and “Avengers: Infinity War” and perhaps even “Captain Marvel” if you want to better understand Monica Rambeau.

In the end, Wanda realizes that she has to break her spell and free all the townspeople, which means she’ll lose her family that she has tethered to the town. In a heartbreaking goodbye, she and Vision tuck their kids in to sleep before they exchange their own goodbyes.

“We have said goodbye before so it stands to reason…” says Vision, “We’ll say hello again,” Wanda says, tearfully finishing his sentence.

I pray this is true, because I need more Wanda and Vision content. All in all, this series was an unexpected tear jerker. This is me specifically calling out Vision for his beautiful line, “What is grief, if not love persevering?”

And let’s not forget the crazy credit scene where we see two Wanda’s: one living a seemingly quiet life in a remote cabin, while the Scarlet Witch side of her is studying vigorously, suddenly alarmed by the sound of her children screaming for her… What could this mean?! I am personally excited to find out, though I know I will not any time soon.

This series was groundbreaking for Marvel as it is a completely new way of doing things. Never before has there been such prominent characters in such a creative series. But while it might be the first of its kind, it’s not the last — I’m personally looking forward to “The Falcon and the Winter Soldier”coming to Disney+ on March 19.

Nevertheless, “WandaVision” is going to hold a special place in my Marvel heart. It made me laugh, it made me cry and it made me better appreciate two characters who I don’t think got enough credit in earlier movies. I am already dying to see more Wanda and Vision.