Squishmallows are taking the world by storm 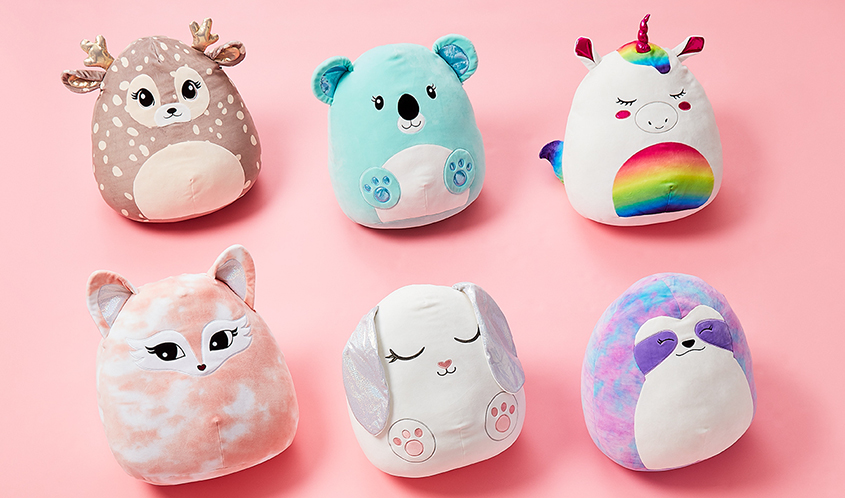 They’re round, they’re soft, they’re squishy, they have cute little faces and they’re taking over the world. From cribs to college dorm rooms, Squishmallows are everywhere.

Squishmallows are round stuffed animals that come in a variety of sizes. They also come with names and adorable backstories. For instance, Simon is a sloth whose description is as follows:

“Want a buddy to just relax with? Simon is your perfect match. If you can’t find him, he is probably at the store buying another video game! He is the greatest video gamer on the block. He loves virtual reality. If it were up to him, he would teleport himself in a second!”

New ones are even coming out with their own birthdays, so if you want to sound extra insane about your Squishmallows, when someone points them out you can say, “Yeah that’s Simon, he’s a Sagittarius.”

But how is it that something so simple (just a round stuffed animal) could take over the world? And why is it that they seem to be appealing to people of all ages? Well, particularly for college students, they provide comfort during some of the craziest years of their lives.

“They’re really cute and soft and they just make me smile,” Jordan Beachboard, a senior at the university, says. She is also an owner of 10 Squishmallows of varying sizes.

Squishmallows first came to the scene in 2017 and, as of February 2020, over 50 million have been sold. Since then, the company claims that sales have tripled during the coronavirus pandemic. With this noted, it’s fair to say that many people turned to them for joy and comfort in these difficult times.

“A lot of people were looking at different sources for comfort during the pandemic,” Beachboard says. “Many were able to find it in the form of these plush animals, as well as the idea of being able to collect them which also adds to the fun and satisfaction.”

There are more than 800 different characters available. They typically range in price from $5 to $40, with this being dependent on both their size and their rarity — a really rare one can be worth hundreds. People have made hobbies out of hunting for rare ones, and it’s reminding many people of the ‘90s Beanie Baby craze, though it is actually significantly larger in sales.

The rise of Squishmallows, however, has been unique in the new world of technology, and that begins with their unwavering popularity on social media: there is a niche corner of TikTok (aptly called “Squishtok”) where you can find people arranging their copious collection of Squishmallows.

Some Squishmallows are hard to find due to their popular demand, and entire Facebook groups have been created for Squishmallow lovers in particular areas so everyone knows what is available in stores and online. There is a private Delaware group with nearly 200 members.

Beyond the realm of the internet, Squishmallows have also been noticeably capturing the hearts of consumers. Some fans spend a considerable amount of time “hunting” for Squishmallows, and it is not a task for the faint of heart.

Some stores have had to institute policies regarding Squishmallows, such as placing a limit on how many can be bought at a time. Many collectors wait in lines for hours to get their hands on those that remain the most in-demand.

Yet, unless you’re really deep into the world of Squishmallows, it is unlikely to come across such a massive Squishmallow event. It is much more likely that you’ll stumble upon them in a more casual way, such as while running errands at Target or Walgreens.

With knowledge, you no longer have to wonder what those cute round animals are doing in rooms across campus. And — whether you have zero or 20 — hopefully you have a new appreciation for them.