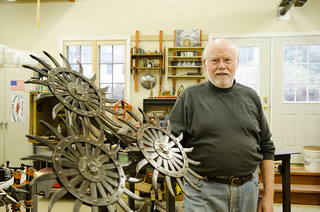 Courtesy of University of Delaware College of Agriculture and Natural Resources
Professor Steven Hastings retires after 39 years at the university.

Having only spent six years away from this university to get his doctorate at Pennsylvania State University, Steven Hastings, a professor of applied economics and an alumnus of the university’s class of 1972, retires this year with 39 years of teaching under his belt.

As associate chair for the Department of Applied Economics and Statistics, undergraduate coordinator and graduate advisor, Hastings has taken on a variety of roles in years at the university, but has kept the same office each year: 209 Townsend Hall.

“Historically I’ve taught our introduction to Ag and Natural Resources, I’ve taught intro to data analysis and variations on that since 1984,” Hastings says.

In his earlier career, he conducted research in economic regional analysis but has spent the past few years more involved with students, advising them and helping those who may not have helpful advisors of their own. He has worked at the university nonstop since earning his degree in 1978.

“My experience would not be typical today, my daughters graduated seven or eight years ago and they’ve already had three jobs, to go somewhere and stay there for your entire career is very unusual,” Hastings says.

With a slight southern drawl and a coffee in hand at 7:30 a.m., the early bird talks about how life at the university has changed since 1968. With the inclusion of technology and cellphones in the classroom, Hastings quickly learned how to integrate programs like Microsoft Excel into his lessons.

He remembers the old days, when he used to tell students to read the newspaper, but “nobody reads a newspaper anymore.” However, he feels the university changes are neither good nor bad, except tuition, which used to be $150 a semester.

“When I first started teaching, I wrote everything on the blackboard and then we went from that to projectors and writing on transparencies, to Wi-Fi and using technology,” Hastings says. “Now we use UDSIS to register for class, but we used to have to go to the field house and stand in line at tables, with a card for every seat in the classroom and you had to pull a card to get a seat.”

He’s kept in close contact with several of his closer students, including one who just graduated last year and joined the AmeriCorps. He says students have recently decided to join service opportunities before acquiring real jobs, which he hopes is a trend to stay.

“That’s impressive to me, students who graduate and have been very good students all their lives, but just aren’t ready to work in a government agency, they want to make a difference, that’s a good thing, taking time off to give back to society,” Hastings says.

His favorite course to teach has been the introductory economics class, where he tries to make the content more interesting than the students expect it to be.

“Economics gets a bad rep from the press so students come into that class thinking that it’s going to be terrible, many leave thinking otherwise,” Hastings says. “All students should have at least one intro to economics class.”

With both of his daughters, his son and his wife all having attended the university and himself having grown up in Seaford, Del., Hastings feels a strong connection with the university and is both melancholy and nostalgic in his final semester of teaching.

“It’s going to be hard to go, I’ll miss the interaction with students and other faculty as well,” Hastings says. “It’s been very rewarding, so it’s going to be difficult in some ways but you know, you reach a point where you want to do other things in your life.”