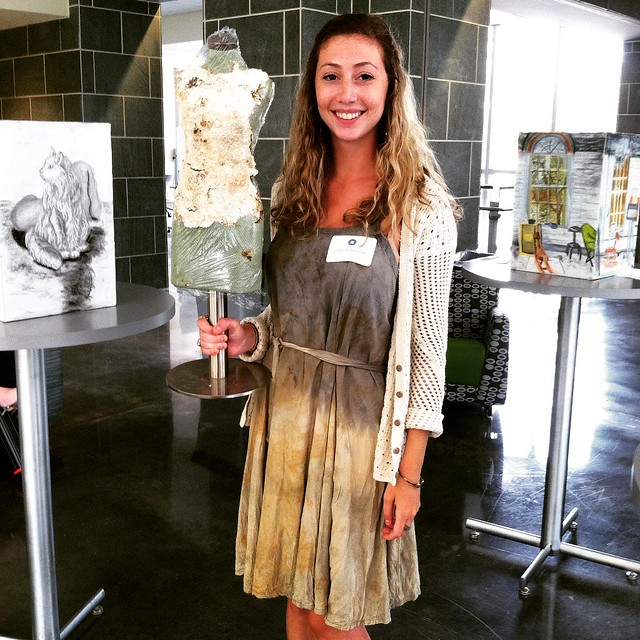 Courtesy of Jill Silverman
Applying mycelium to a dress form was an important component in understanding out how the fabric would hold up on a human-like figure.

Mushrooms grow in dark, damp places, springing up swiftly over night. To most, they are an unappealing part of nature, but to senior fashion merchandising student Jill Silverman, they are an opportunity to turn something overlooked into a sustainable fashion design.

This past summer, Silverman worked with fashion apparel design professor, Kelly Cobb, on an experimental design project that aimed to convert mushrooms into useable fabric.

“I’m really interested in sustainability in fashion, so I was talking to different professors, and it was suggested that I talk to Kelly Cobb who’s a design professor,” Silverman says.

Cobb was looking for someone eager to get their hands dirty, as well as someone who could move through a wide range of tasks on a day to day basis.

After meeting with Cobb for five minutes, Silverman agreed to join the project.

The aim of this project was to find a way to make fabric more sustainable. Silverman explained that post-consumer waste is a huge issue in a world of fast fashion.

“People wear something from Forever 21, it falls apart and gets thrown away, which takes up a lot of space in a landfill,” Silverman says. “We were toying with the idea of making something that would break down 100 percent, so she came up with the idea of using mushrooms.”

Silverman explained that Cobb got the idea of using mushrooms from a science fiction novel she was reading, in which the characters wore garments called “flimsies” solely for special occasions. The characters would throw them away and they would decompose completely.

Cobb expressed admiration for the naturalness of the science fiction world she encountered, pointing out the reuse of objects no longer needed.

“To engage in the construction of style is a gesture of joy,” Cobb said. “In the utopian world I read about, this expression was nurtured with garments that in the end were cast away, yes–but to feed the garden.”

Silverman explained that there has been a recent move towards sustainable fashion, which includes using sustainable cotton and limiting the amount of chemicals used in production. However, issues in sustainability are focused more on the production of material rather than the material itself.

Since this was the first time working with an idea like this, the aim of their summer project was to lay the groundwork for future research, which would enable Cobb to obtain grant money. Silverman spent the first week researching sustainable fashion, looking especially at what had been done with mycelium, which is the root structure of a mushroom. Companies have successfully used mycelium as a styrofoam replacement, as well as a building material.

Cobb explained the uncertainty of entering the project without any point of reference.

“I knew that hard surface mycelium structures were possible, but did not see any soft structures so I had no idea what would happen,” Cobb said. “I just have my expertise in textiles and the concept of soft structure mycelium for fashion just resonated so strongly with me.”

Silverman and Cobb visited Kaolin Mushroom Farms in Kennett Square, Pa. There, they learned more about the process of mushroom growing. They were given compost and other materials to use. In addition to this, Silverman and Cobb ordered growing kits, which consisted of mushroom material mixed in with a woody substrate.

They worked on their experiments in the textile lab at Alison Hall. Silverman explained that while they do have some equipment for experimentation in Alison, it wasn’t necessarily the right environment. Issues with temperature control caused the most problems as mold would start to grow in the mushroom material.

Silverman and Cobb began their experimentation by spreading mycelium onto different pieces of fabric, using mushroom spawn and a mix of other substances. Through a slow process of trial and error, they figured out what worked and what didn’t.

Since much of her mushroom experimentation was a process of waiting, Silverman did her own side experiment in natural dyeing. She attempted to dye material using objects such as the weed commonly known as “Queen Anne’s Lace” and avocado pits that would normally be seen as waste.

“I live above El Diablo, so I went down and asked if I could have their avocado pits, which they did donate, but it was a weird conversation,” Silverman says. “People would just see me picking flowers on the sides of fields in random places, so that was an adventure.”

Silverman is interested in pursuing a graduate program in the fashion department, after which she could become Cobb’s research assistant if funding is granted. Silverman said she has enjoyed the opportunity to fuse some of her favorite things.

“I just thought it was cool and crazy to be a part of something that was really starting from scratch, and trying to create a foundation for a project that hasn’t really existed in the past,” Silverman said.