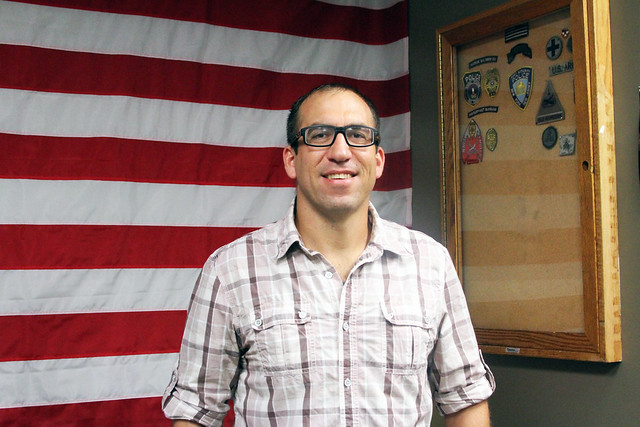 br> Minji Kong/THE REVIEW
Jason Wardrup, an energy and environmental policy major from the university was deployed a total of four times between 1999 and 2003.

Fifteen years ago, on Sept. 11, 2001, the 3rd Battalion 75th Ranger Regiment was told to turn in their cell phones, grab their gear and get ready to deploy.

Jason Wardrup, an energy and environmental policy major from Harbeson, Del., was one of them.

Wardrup was enlisted in the army from 1999 until 2003. He was deployed a total of four times in the support of the global war on terror, twice to Afghanistan and twice to Iraq. Today, he is less than a semester away from graduating from the university, but said he recalls the attack, and the months that followed, clearly.

After graduating from Cape Henlopen High School – located in Lewes, Del. – in 1999, Wardrup took the summer off, beginning basic training that August. Soon after, he went on to Airborne School, followed by the Ranger Indoctrination Program. By early 2000, he was assigned to the 3rd Battalion 75th Ranger Regiment.

“It wasn’t really a plan to go to Rangers right away,” Wardrup said. “I really just wanted to go to Airborne School. But I said, ‘well, I’ll give it a try.’ It was the best decision I ever made.”

The Rangers, a part of the special operations command, are considered the world’s premier light-infantry unit.

After extensive training, Wardrup graduated from Ranger School as a team leader in June 2001. Just months later, the 9/11 attacks happened.

Immediately following 9/11, the American military transitioned from peacetime to wartime, with a clear mission to take down the assailants. Wardrup saw this transition firsthand.

“I had just left the chow hall and I came into the company headquarters. They were setting up a TV in the room,” he said, describing the morning of Sept. 11, 2001. Wardrup said that, once the television was set up, they turned to CNN just in time to witness the second plane hit the towers.

Complying with regulations, the army went into operational security, where soldiers were instructed to gather their cell phones and modems and turn them in without contacting anyone.

Wardrup says that his battalion was one of the first ones in Afghanistan after 9/11. The National Command Authority (NCA) keeps the third Ranger battalion as a ranger ready force, or rapid deployment unit, meaning they can be deployed at any time.

“You have these expectations of what combat is, and then when you get there, sometimes it doesn’t meet your expectation,” Wardrup said. “It’s a lot more surreal, and we learned the cost of the war right away.”

Two of Wardrup’s fellow Rangers, John Edmunds and Kristofor Stonesifer, were killed in action (KIA) on Oct. 19, 2001 during the first mission. Their helicopter crashed and they were crushed underneath.

“If you had any illusions of the glories of war, it hits you right in the face that this is the true cost,” he says.

Wardrup believes that 9/11 was a major awakening for America, considering it was the first time the country was attacked on its own soil since Pearl Harbor. He said that, at the time, the country primarily felt justified in what the military was doing in Afghanistan, and that civilians wanted justice.

Wardrup was scheduled to get out of the army in Aug. 2003, but due to the stop-loss, his contract was extended and he was deployed a fourth and final time to Iraq. He was discharged on Dec. 23, 2003, just two days before Christmas.

Wardrup said he believes that once the Iraq War came on the table, the focus really shifted away from Afghanistan, a place where soldiers are still fighting to this day. The war in Afghanistan is the second longest running war in U.S. history, only four years shy of the Vietnam War.

“It really feels like it was just last week,” Wardrup said, adding that he believes this time in September is always a time to reflect. “Hopefully, the country as a whole looks at that event and where we’ve gone as a country since then and learns some lessons from it. It’s just a completely different America, from pre-9/11 to post-9/11, in my opinion.”

With the upcoming election causing major tension, Wardrup said he believes that the generational divisions are holding the country back.

Wardrup said that serving as a ranger in the army, especially during what he considers such a pivotal period in America, affected him in ways he might otherwise not have been.

“I try not to dwell on the minutiae, the little things that tend to bother people,” he said. “There’s a greater sense of appreciation for everything I have, the people I have around me and the people I served with.”

Wardrup is a member of Blue Hen Veterans. He said that he was not aware of the registered student organization until he happened to have a class with the club’s president.

“The professor asked where we’ve been in the world, and he was saying a lot of places that I’ve been to that not too many people go to,” Wardrup said.

He said that after that, he and the club’s president connected and he got involved, helping to rebrand the club along the way.

With Wardrup expecting to graduate at the end of the fall semester, he wants people to know that soldiers don’t set aside the part of them that is a civilian when they take on their role.

“We really owe it as a society to understand that,” Wardrup said. “The vast majority of veterans come back, integrate into society and are real assets that have great accomplishments in their civilian life as well. And I think part of that is because of the shared experience of serving something more than yourself.”