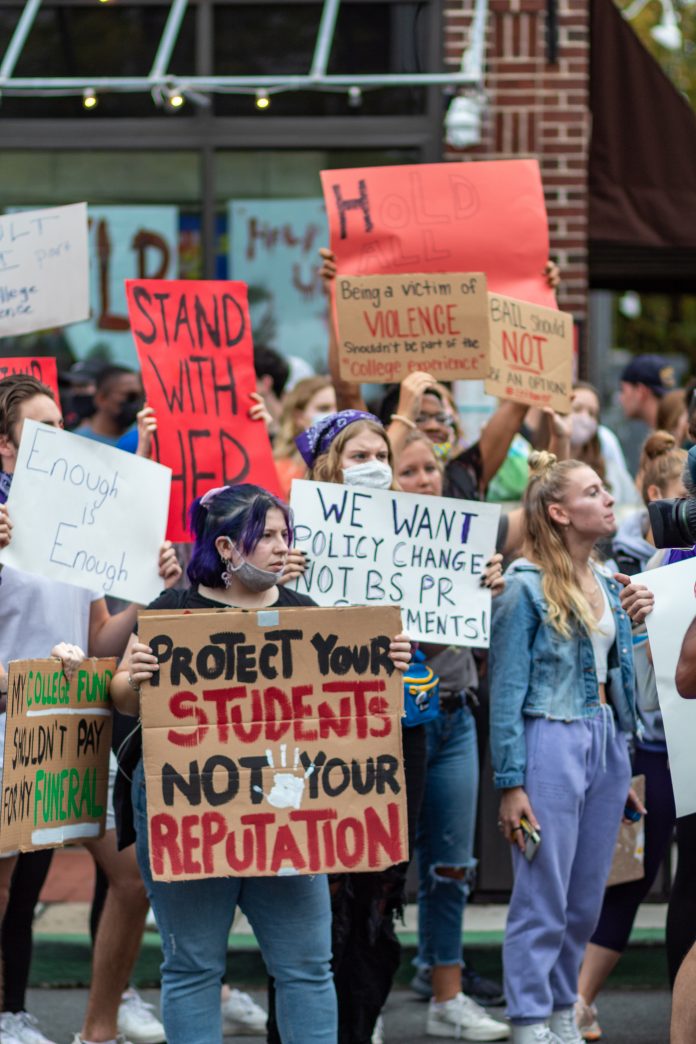 The university has faced national scrutiny in recent weeks after protests against gender-based violence on campus went viral.

On Oct. 11, sophomore Brandon Freyre was charged with kidnapping, assault, strangulation and terroristic threatening after being reported for assault by a female victim on Oct. 8. Following Freyre’s arrest, multiple protests broke out in response to lack of university action.

Emily Morgan, a university alumna, is an intern for Rise, a national non-profit organization aimed at passing legislation in every state protecting survivors of sexual assault. Morgan has largely been at the forefront of the issue of sexual assault and gender-based violence through her time as an intern.

“It’s been infuriating and confusing, just because there had been so many different conflicting lines of information coming in when it initially happened,” Morgan said about the university’s initial information about the incident.

Senior student Emma Burrows, who spoke about her own experiences at a protest on Main Street, has been focused on calling out the university for past incidents that have been dealt with in silence.

“I was very disappointed to find out not from the university, since we find out so many other [incidents],” Burrows said. “They send out a mass email for every robbery, every break-in on campus, and they never send one for any gender-related violence.”

On Oct. 21, students gathered outside of Memorial Hall for a candlelight vigil in honor of the victims and survivors of sexual assault and domestic violence. While the university administration co-hosted this vigil, Burrows expressed disappointment in the nature of their attendance.

“Administration the whole time was standing off to the side not talking to anyone,” Burrows said. “There was a huddle of university administrators that were just in the back corner, standing, while everyone else was sitting on the Green, and they didn’t ever mix-in or come and talk to anyone.”

Morgan agreed that the presence of the administration at the vigil, as well as the statements released in the wake of the assault, were more performative than substantial.

“There seems to be a disconnect between making a statement of togetherness and strength, and making university changes that promote survivor assistance and action,” Morgan said.

Some students are calling on the university to regulate Greek life more extensively, after allegations that Freyre’s fraternity, Kappa Delta Rho, could have been aware of his violent behavior.

“Personally, I have never been a fan of fraternities, since I have always felt that they help exacerbate a male superiority complex among the men who decide to join them,” junior Wylie Feaster said. “If something happens, ‘it’s okay because I’m your brother, I have your back.’”

Burrows agreed that the university needs to hold fraternities accountable, as well as individual perpetrators.

“[The university] never really owned up to the fact that they’ve been ignoring women for so long who have reported,” Burrows said. “I also think they need to get a better handle on fraternities, so I would be looking forward to the fraternities and university working together more on their bylaws and policies.”

Other students, including Feaster, are calling for reform within the university’s police department.

“I really feel like there needs to be an overhaul on how the on-campus police department respond to acts of gender-based violence and sexual assault,” Feaster added. “Incidents like these induce severe amounts of trauma in those who go through them so to be basically brushed off by the people who are supposed to be ensuring the safety of all students on campus does not help strengthen the relationship students have with the university.”

Overall, university students are seeking support from the administration in the wake of a traumatic event that shook the campus.

“When violence occurs, or anything of a negative nature for that matter, there [should be] a response by a higher power that is meant to protect you as a survivor, or assist you in whatever way you need,” Morgan said.