The disabled experience in Islam 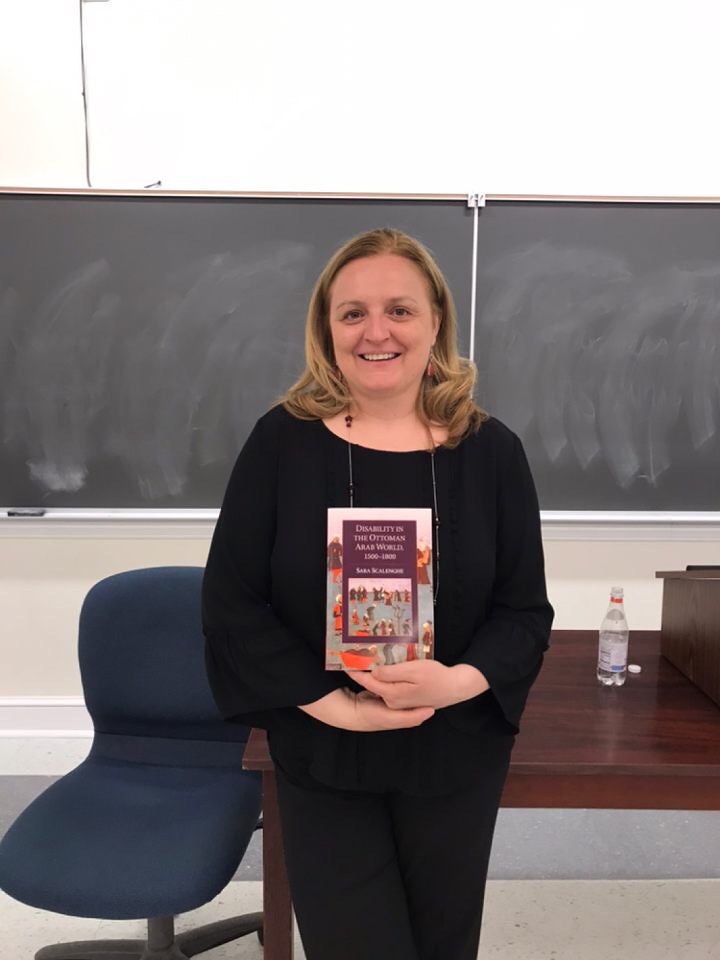 Emma Straw /THE REVIEW
Sara Scalenghe’s (above) research began with two central questions: why were there so many people with impairments in Ottoman Syria, and how were people with different types of impairments understood, conceptualized, treated, accommodated or marginalized?

A social historian trained in Islamic studies told the audience members of Wednesday’s talk in Gore Hall that the Middle East has had a culture of socially including people with disabilities.

The historian, Sara Scalenghe, an associate professor of Middle Eastern history at Loyola University, focused on the history of people living with disabilities such as blindness, deafness and mental impairments throughout the Middle East.

The Islamic Studies Program hosted her lecture, which showcased the existence and prevalence of disabilities outside of the United States.

“We have this burgeoning disabilities studies minor that’s become the most popular minor on campus, and this talk is a wonderful synergy, convergence of interest,” Rudolph Matthee, an audience member and professor of Middle Eastern History at the university, said.

Scalenghe said she was interested in the story of people with disabilities within this Middle Eastern context.

“I am committed to civil rights and committed to uncovering and supporting people from marginalized groups in history,” Scalenghe said, beginning her lecture.

This commitment to progressing social justice led her to investigate disabilities within Ottoman Syria, which is now modern-day Lebanon, Syria, Jordan, Palestine and Israel. Ottoman Syria was organized by the Ottomans in the 16th century and provided an interesting case study for Scalenghe.

Scalenghe’s research began with two central questions: why were there so many people with impairments in Ottoman Syria, and how were people with different types of impairments understood, conceptualized, treated, accommodated or marginalized?

Scalenghe also found a story within the Quran that shows God rebuking the Prophet Muhammad for having mistreated a blind man. The Prophet then realizes that this blind man can be just as spiritual as anyone else, even without his sight.

“If it’s in the scripture that a man who is blind does not lack spirituality, it sets the stage for how blindness is then treated in Islamic law,” Scalenghe said.

She continued to discuss the factors that caused the high disability rates in Ottoman Syria. She found the environment, specifically soil, and first cousin marriages to be the culprits.

“The soil within the region lacked iodine, a necessary nutrient whose deficiency can cause a host of congenital impairments,” Scalenghe said. Similarly, first cousin marriages led to a number of children being born with major hereditary impairments.

At the end of her talk, Scalenghe told the audience that her research was a macro study, focused on discussing disabilities at an introductory level.

“I’m just kind of very humbly laying the foundations,” said Scalenghe. “There’s much more that can be done.”

Her lecture, titled “Disability in Middle Eastern History: Challenges and Possibilities,” was based on her book “Disability in the Ottoman Arab World 1500-1800.”

Scalenghe is working on book two of her trilogy which will focus on the Middle East from the colonial era until the early 20th century. Book three will concentrate on disabilities in the Middle East, post-independence from Europe following World War II.