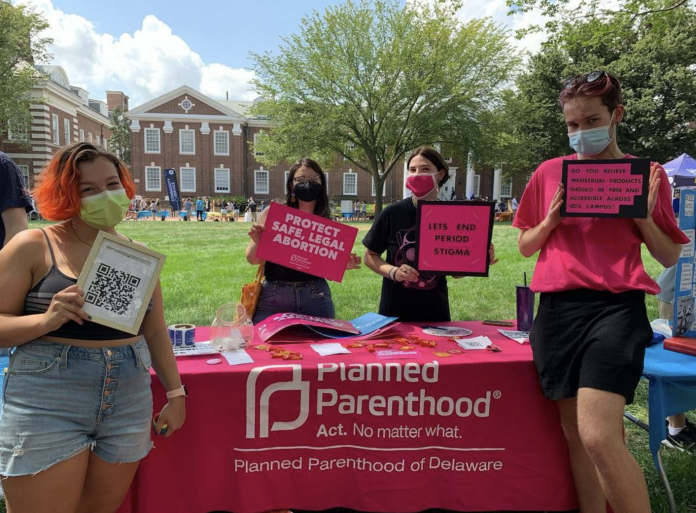 Millions of menstruating individuals around the world lack access to proper period products, resulting in increased risk of major health issues. Organizations around the world have been fighting for equal access to sanitary products, including Planned Parenthood Generation Action here at the university.

The student-led club is currently lobbying for the university to provide free organic women’s health products in all on-campus buildings. Although this movement is centralized on campus, it represents a larger issue regarding the negative stigma surrounding menstruation and unequal access to period products.

According to a study from the Always organization, “when individuals don’t have access to period products, not only do they not feel protected, but it also puts their confidence, dignity and education at risk.”

A report from Global Citizen states that this issue becomes even more exacerbated for people with disabilities, in conflict-affected areas or after natural disasters.

Fiona Eramo, a junior studying public policy and women & gender studies and president of the organization, started a petition on change.org that now has over 800 signatures and 750 supporters.

“There are minimal options for students who menstruate,” Eramo wrote in an email. “The products that are available are only in women’s bathrooms, require coins that are not always accessible, are often empty and are cardboard, which can be painful.”

Only a select few buildings on campus even have these products at all. Most bathrooms — including ones in residence halls — have no resources available. Students provide for themselves and support their peers when the need arises.

“I have been in a position myself where I started my period during class and did not have any sanitary products on me,” Eramo said. “This forces me to either free-bleed or use poor-quality toilet paper if I did not have coins on me.”

“There have been times where I’ve been without a pad and had to go to the store to buy them myself in the middle of the day,” Etienne said.

Senior Katelyn Byrnescunningham said that “getting your period unexpectedly while in public is nerve wracking enough,” even without having to worry about the price aspect.

Along with the cost of sanitary products, Eramo said that people who menstruate face the costs of “replacing underwear, buying medication to aid with cramps, [and buying] heating pads.” She also mentioned the expenses for chocolate, the ultimate craving and mood swing remedy.

“Having to pay for basic supplies that are as common as toilet paper feels like exploitation,” Byrnescunningham said. “The tampon dispensers also rarely take dollar bills, which would require exiting the bathroom in a vulnerable state just to find spare change.”

There is also a widespread stigma about who gets periods. Some students on campus are unaware of the reasons for putting sanitary products in female, male and gender-neutral bathrooms.

“To equally support the entire UD community and folks who identify outside of the male/female binary, they need to be in all bathrooms,” Eramo said.

According to Planned Parenthood Generation Action, the solution is simple: free and organic menstrual products in the women’s, men’s and gender-neutral bathrooms. It is important to the organization that these products are universally accessible and made sustainably by obtaining products with organic cotton and no plastic.

These students believe that by addressing these issues the university will not only alleviate some of the discomfort that menstruating students feel, but will also help end a negative stigma surrounding periods.

“I think that tampons in the bathrooms would be good for people at the university so that reproductive health will never stand in the way of their education and might reduce financial stress for some students,” senior Elise Hance said. “Periods are a normal bodily function and access to tampons should be similar to that of toilet paper.”

On Apr. 8, Delaware Governor John Carney signed legislation requiring “all public and charter schools which have students in grades 6-12 to provide free feminine hygiene products in 50% of the bathrooms used by students who can have a menstrual cycle.”

“Period products are not a luxury. They are essential items for our daily lives,” Representative Valerie Longhurst, the prime sponsor of the legislation, said. “But the cost can be a barrier. People of all ages struggle at some point in their lives to afford period products. This problem is magnified for low-income families, which puts stress on children as they mature.”

Eramo is hoping to reach 1,000 signatures and set a meeting with the dean of students within the next month. In the meantime, the organization plans to continue collaborating with Planned Parenthood representatives, using social media and holding rallies on The Green where their mission can be broadcasted further.

Editor’s note: Sophia Johnson, a member of Planned Parenthood Generation Action and a senior reporter for The Review, was not involved in the publication of this piece.