The Freshman 15: Calorie counting and disordered eating in college 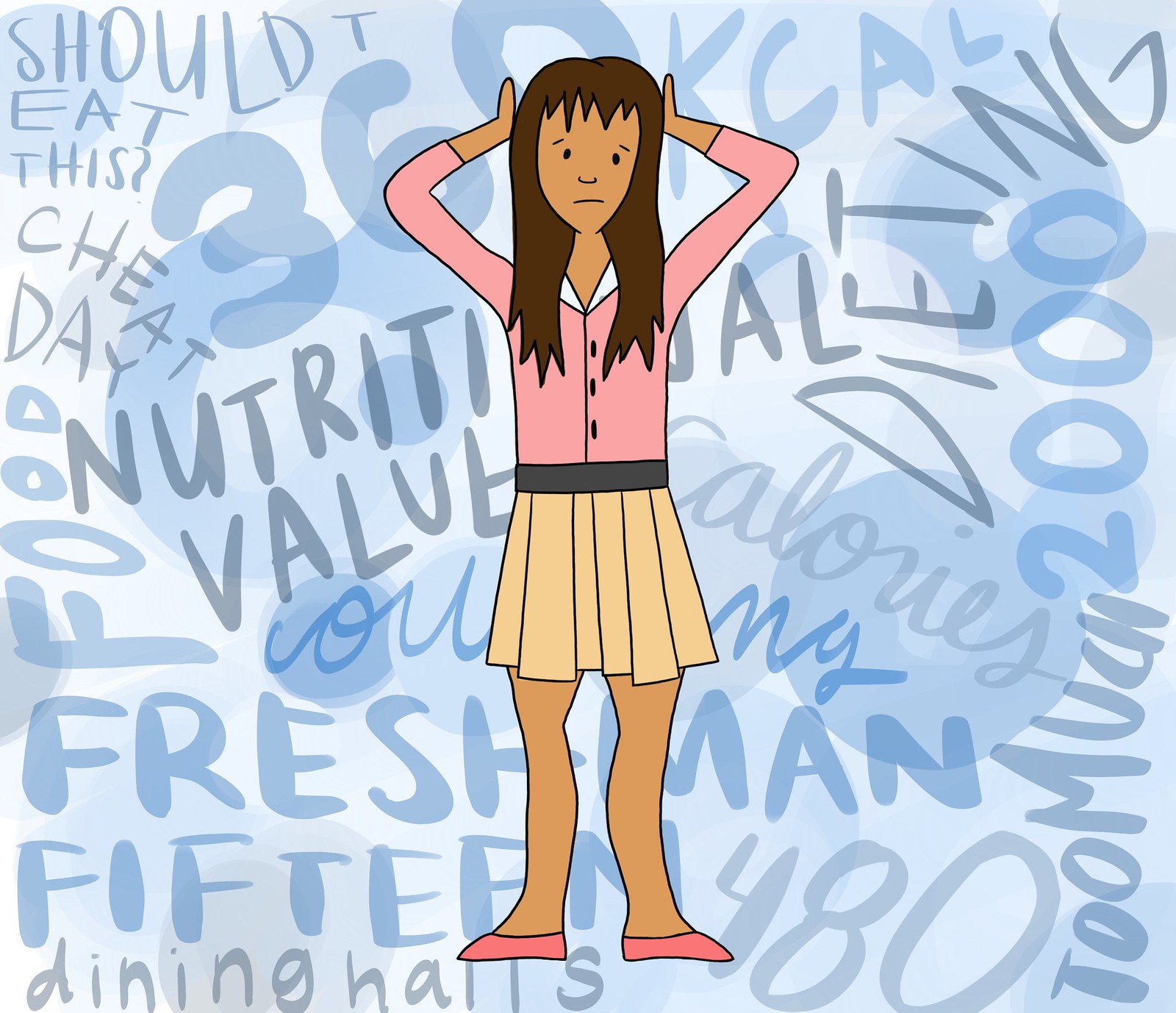 Tara Lennon/THE
REVIEW
On top all the numbers they have to keep track of in their head, the students in personal health management classes have to count another aspect of their lives for a week: the amount of calories they eat.

On top of all that, the students in personal health management classes have to count another aspect of their lives for a week: the amount of calories they eat.

As an assignment, they keep records of this for a week during their nutrition unit. Every person, according to Laura Gimbutas, an adjunct professor of behavioral health and nutrition, requires a specific amount of calories to maintain a healthy weight. The amount in question depends on a variety of factors, including muscle mass, activity level, height, basal metabolic rate and other genetic variables.

For this assignment, students first take a quiz on myplate.gov to determine how many calories they need each day. The quiz takes a few of these factors into account, but it cannot predict a specific person’s basal metabolic rate. Therefore, it only provides an estimation for daily caloric intake.

Despite the potential inaccuracy of this estimate, students in this class compare their caloric intakes and the amounts of nutrients they received to the recommendations provided to them.

Gimbutas said that the goal of this assignment is to provide students with awareness of how calories work, the role they play in maintaining a healthy weight, how many calories are in certain foods and what other nutrients are in the foods they eat.

However, such an assignment may have unintended, harmful effects on some students.

“Anything health-related runs the risk of becoming unhealthy,” Gimbutas said.

According to Gimbutas, the practice of counting calories can lead to unhealthy, restrictive behavior. She said the assignment is short-term because counting calories for a long-term period is not necessary and if a person is eating balanced meals, they will naturally maintain a healthy weight.

“I’ve seen people with eating disorders in my treatment who have told me that they remember it started when they did an assignment that looked closely at food intake,” Collison said.

Alexandra Juliano, president of the university’s chapter of Project Heal, an organization with the stated purpose of raising money and awareness for eating disorders, said that recent research also shows that counting calories instills a diet mentality within people and could potentially cause disordered eating patterns.

Gimbutas said that the majority of students do not run this risk. However, she does communicate to her students that she would tweak the assignment to suit their individual needs.

Collison said that a better alternative to this assignment would be to track the calories of someone else, as some college students may find calorie counting a triggering practice.

According to the National Eating Disorder Association (NEDA), men and women are particularly vulnerable to disordered eating in college. Full-blown eating disorders begin typically between the ages of 18 and 21, and potentially, 4.4 to 5.9% of teenagers enter college with an untreated eating disorder. Experimentation with dieting can progress into pathological dieting and even further into a partial or full-syndrome eating disorder.

“I think a lot of people probably have disordered eating or a poor relationship with food,” Collison said. “They don’t trust their choices, they tend to have some black and white thinking, and they have guilt for eating foods they shouldn’t be eating.”

Juliano echoed the prevalence of disordered eating on college campuses.

“Everywhere you go, there’s someone to compare yourself to, whether it’s in class, in a student center studying, partying, the bars,” Juliano said. “I think a lot of college women have disordered eating behaviors and don’t even know it because [their behaviors are] not necessarily diagnostic of a specific eating disorder.”

She said that society has normalized unhealthy behaviors, therefore, students do not question their relationships with food.

“It’s almost a norm to skip dinner so that you can drink less and get more drunk, or skip dinner because formals coming up and you want to look good,” Juliano said.

Although disordered eating may pose a threat to college students, many students use the phrase, “The Freshman 15” to emphasize the threat of weight gain on college freshmen.

According to NEDA, freshmen gain between 2.5 to 3.5 pounds on average, far from the alleged fifteen pounds and only a half-pound more than the average of their peers who did not attend college.

Additionally, Juliano said that women naturally gain weight each year and, therefore, it biologically makes sense that students would gain weight. However, she said that students blame weight gain on their diet and cut their intake.

Students, according to Collison, rather than resorting to dieting, should trust their natural hunger cues and try to eat balanced meals along with their favorite foods to avoid restrictive eating patterns.

Juliano, personally affected by an eating disorder, now relies on intuition to guide her eating.

Collison said that students should utilize online assessments if they feel they might have a disordered relationship with food. After they find out their risk of an eating disorder, they should seek the help of a professional, like the dieticians available at the student health center.

Juliano said that the university could improve the resources and education they provide regarding eating disorders.

In her experience, many students lack an understanding of what different eating disorders actually are, and the university could remedy this with expanded dietetics electives, an online course educating incoming freshmen like AlcoholEdu and information sessions during freshman seminar classes.

“I think that the school could do better,” Juliano said. “Eating disorders deserve equal attention to other mental illnesses.”