The “United” part of our States, right down South College Avenue

Imagine yourself at 18 years old.

Go back in time and reminisce on the days of college applications, prom dress shopping, suffering through SAT study prep and banging your head against the wall with everyone asking, “What are you going to do with your career?” And all you wanted to say was, “Getting my Ph.d. in homeless studies, thanks for checking in.”

Now imagine your horizon expanding. Imagine considering not just Penn State University or Temple University, a mere car ride from your bed at home — but a school in another continent. In that case, you might attend on scholarship to play your favorite sport.

Sounds simple enough, until you realize you’re committing to four years of being educated in another language, far away from your friends and family, immersed in a new culture and basically hoping you’re not screwing yourself over.

If you can imagine that, you might be able to catch a glimpse of the lives of the international athletes on campus.

Delaware’s athletes hail from countries all over the world, primarily from European nations with exceptions like the United Arab Emirates, New Caledonia, and South Africa. Many U.S. college sports teams share this high level of variety, especially in soccer and field hockey, which has increased in popularity within the last several years.

As a general rule, European countries don’t offer education and sports together like the system in America does. Club sports are available up through high school, and if you want to continue playing at a high competitive level afterwards, the only option is to go professional.

In that case, you either have to abandon your pursuit of a higher academic degree or of your sport. In that way, the American system sets itself up as a clear, solid alternative.

At the same time, players of sports like field hockey and soccer seem to be held to higher standards in Europe.

“In Europe, we joke about America’s soccer because … it isn’t good,” said Timo Hummrich, a Delaware soccer player from Germany. “They [always] kick the ball long, rather than directing the style of the game.”

So then, why would aspiring professional athletes ever come to play in the U.S., if the general level of competency is lower?

“It’s very hard to go far with soccer in Europe because it’s so competitive,” men’s soccer Head Coach Ian Hennessy explained, referring to the extremely high standard that all footballers are expected to meet. “And America has the best education in the world and is envied for its opportunities.”

Hennessy was recruited to Seton Hall University after playing soccer for the Republic of Ireland. He studied microbiology in graduate school before he realized that it wasn’t for him and decided to try coaching. Today, he calls it “the best decision I ever made.”

Nevertheless, coming to the U.S. isn’t a short and sweet process. Athletes typically operate through third party agencies which connect them to coaches of universities in the United States.

“It took around two years [for me to sign with the university],” Hummrich said. “It’s really a lot. You have to collect video footage, and take the SAT … I think I was busy until the last day, organizing stuff. It’s the little things that you wouldn’t think of, like I had to get an international driver’s license, and insurance.”

While it’s possible to fast forward through this two-year process, “if you want to get into a really good school, those schools are recruiting earlier and earlier,” golfer Ariane Klotz explained. Klotz hails from New Caledonia.

International student athletes must also pass an exam called the Test of English as a Foreign Language (TOEFL).

But even if you pass the TOEFL, a four-hour standardized exam, nothing can compare to immersing yourself 24/7 in a foreign country.

“I couldn’t make [good] relationships with American people,” Spanish soccer player Fede Prieto said, when discussing the language barrier he faced upon arrival at Delaware. “Without [good communication], it’s difficult to create a relationship. You don’t feel yourself.”

“When I came here, I was just listening [to people] for the first two weeks, trying to learn how to say things in a right way,” Masson-Viale said.

In many ways, our individual identities are forged inside of our languages — our ability to convey ourselves to the world. Being deprived of such an essential ability, even for a little while, can be paralyzing until you figure it out. Thankfully for Delaware’s international student athletes, that adjustment period doesn’t typically last very long.

“And it’s not hard,” Masson-Viale said. “If you don’t put some joy into it, it’s going to be hard for you. You just need to relax and be open with everyone.”

Athletes experienced a range of emotions during their transitions.

“I mean, it was scary at first because I didn’t know anyone,” golfer and Switzerland native Valentina Mueller shared. “I didn’t know what to expect of colleges in America. I only knew what I saw in the movies.”

For several athletes, they were simply in disbelief.

“My country is so small and the U.S. is so far, [coming here] was kind of like a movie,” Klotz said. “I did not really believe I would go there. I remember the first time I talked to my friends about it, I was like, ‘Can you imagine? That would be awesome — but I don’t think that’s going to happen.’”

On top of that, when the athletes arrived to the university — for some of them, their first real exposure to the United States at all — certain aspects of the culture surprised them particularly.

“[People] really want you to do stuff with them as soon as you meet them,” Klotz described, chuckling. “Like, ‘Hey you should come hang out with us!’ At home … you don’t do that. It was a nice surprise that [people here] are open-minded and really welcoming.”

“I was with [a girl I had just met], and when we ran into some other people, she introduced me as her best friend,” Mueller said. “I thought, ‘Really? We are best friends already? We just met!’”

This, as well as American food, the older drinking law and the unexpectedly large size of the school, were all things mentioned as fairly shocking.

Simultaneously, however, international athletes aren’t coming to a diversely vacant situation — quite the opposite.

“The university is a powerful energetic melting pot,” Hennessy said.

Typically they are enmeshed with other international players as well, often their first time playing on such diverse teams.

“People from different cultures always have something new to bring up to a conversation. It’s very cool,” Prieto said.

“It’s funny to see how all these cultures come together and have their own habits,” field hockey player Lotte de Koning said. “And it’s still one team and everybody is friends.”

And it’s not just in different personalities; different cultures bring a diversity of skills to the sports as well.

“The European players tend to be very technical and tactical, while the American players are more physically trained and fit,” field hockey Head Coach Rolf van de Kerkhof said. “There is a synergy effect that makes them better together.”

And it makes sense, too. Many American athletes start focusing on their individual disciplines later in life, after having established a physically fit lifestyle, while foreign athletes typically focus on honing the specific skills of their discipline early on in life.

This combination of backgrounds, as the athletes testified, actually expands their repertoire of skills.

“When people come from different backgrounds, it usually presents itself in a different skill set,” said John Schroeder, an English-born soccer player from Houston. “Which means on the field you’re going to have unique abilities that other teams might not have … I think just understanding and appreciating that diversity makes you a wiser person too.”

On that more personal point, the diversity does more for us than just give us better teams. It also makes us better people.

“The world is getting smaller and smaller,” said golf Head Coach Patty Post. “[Our international athletes] bring their cultures with them and their personal experiences, and it all adds to [our] learning and growing as people.”

Existing in the midst of all these advantages, however, is a natural adjustment period that inherently comes when different kinds of people blend together.

“There may always be a layer of uncertainty for people,” Schroeder said. “Maybe the apprehension could be fueled by certain societal trends or politics or the media … but I would say as a team we have probably done just as well as we could to create a community that’s just open to being yourself.”

Student athletes arrive to the States having never before met their teammates. They have no idea what the team dynamic will be like.

“In France, it happens a lot that within a team you don’t like everyone,” Masson-Viale said. “But when I came [here], I was surprised that it’s such a friendly competition — everyone likes everyone; there’s no hate. It’s very hard for people to not like each other. After one month here, I was like, ‘There’s no way I’m going to hate someone here.’”

Along with the celebration of many differences, there’s a precious and underlying point about unity as well.

“One thing I’ve learned at Delaware: people are more similar than you think, even if they’re coming from Iceland, Czech Republic, wherever it is,” Schroeder said. “Just because they’re from a different part of the world, even our own continent, doesn’t mean they’re going to have some crazy different view. We could look at our sport — soccer — or the arts or even food; those are all significant common denominators, and at the end of the day, through those mediums it’s really easy to find common ground with people.”

There’s no doubt that the differences that divide people can be innumerable, and if you’re looking for reasons to separate people, you will always find them. But similarly, there will always be common ground somewhere to unite them.

“It just makes a very good mix,” Masson-Viale said, when discussing Delaware’s international recruitment program. “[And] these guys are going to be friends for life. When I’ll be thirty, I’ll just knock at Fede’s door in Madrid, same in Oslo for Halvard, anyone can come to my house in Corsica.”

“We have friends for life now. I love that.” 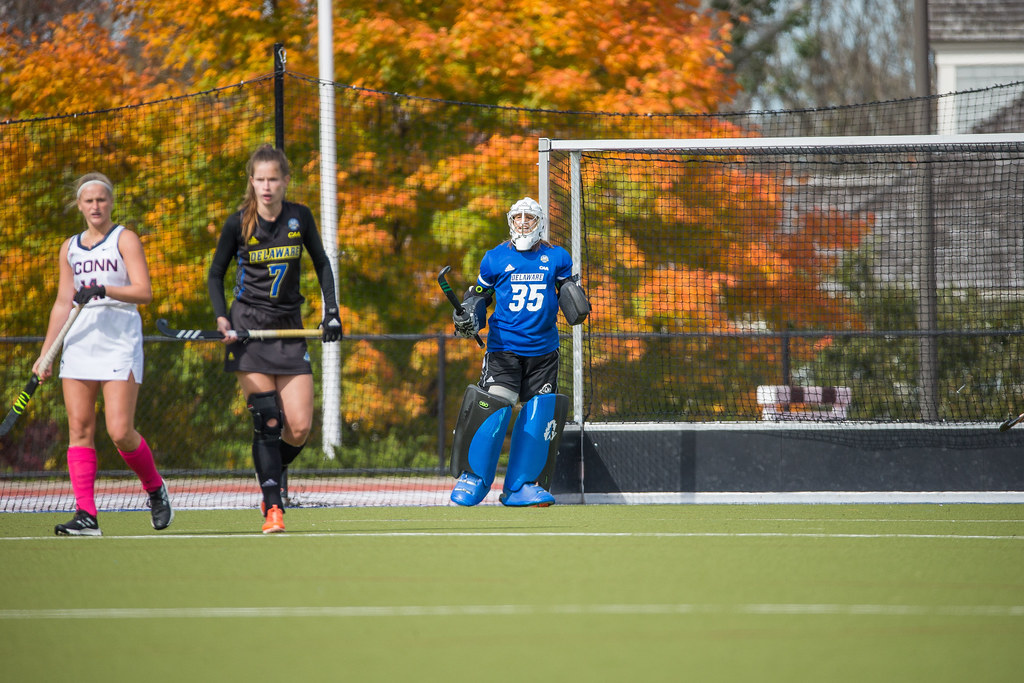