“There is no bridge between us”: International students talk communication gap 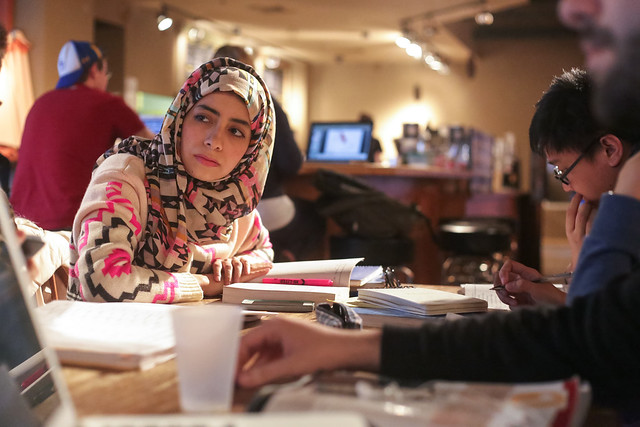 Kirk Smith/THE REVIEW
International students address how the underlying communication gap between themselves and the domestic students is negatively influencing their college experience.

Zifei “Frank” Wu did not expect his college life to only consist of three things: classes, gym and walks between his dorm, classes and the gym. He said he thought he would have more American friends at this point, but he still hangs out with the same Chinese friends he met through the English Language Institute (ELI) a year ago.

“It is hard for international students to talk to Americans,” Wu said. “We are so nervous when we speak English…and we don’t share the same culture so it is hard to have a conversation with them.”

As a freshman living in Kent Resident Hall, Wu expected he could socialize with domestic students on a daily basis; however, the reality is just the opposite. Besides Wu’s roommate and himself, there are other at least 12 Chinese students and only a few domestic students living on his floor. Wu is not friends with them.

Wu said his resident assistant has tried to invite the international students to some social events, but only a few of them attended. On the other hand, domestic students didn’t seem to make an effort to talk to them during the events.

Wu remembered his dorm had a meet-and-greet activity in the beginning of the semester aiming to bring the residents together. He and other Chinese residents on his floor went to the event. Wu said the lobby was divided between domestic and international students.

He recalled that each group were comfortable with staying within their own groups during that event. The RAs and other event planners attempted to bring the two groups together, but they didn’t succeed.

“There is really no bridge between us,” Wu said.

According to the website of the Office of International Scholars and Students (OISS), there were a total of 4,033 international students enrolled at the university as of fall 2015. Among international undergraduate students, Chinese students make up 70.5 percent of the population.

The university had 143 Chinese students in 2009. That number skyrocketed to 398 with an incoming class consisting of 163 Chinese freshmen the following year.

An economic impact formula established by NAFSA: Association of International Educators estimated that the university’s international students contributed more than $100 million to the local economy in the 2014-2015 academic year.

Paul Sulzer, who is an academic adviser in the College of Arts and Science, said there is no doubt that the university receives economic and cultural benefits from the international student’s presence. The university considers this as a mutual exchange, he said.

However, according to Sulzer, the exchange between the university and the students are not as equal as it should be.

“There are resources through OISS on our campus that are put into students, but I think it’s questionable how much of impact it has on students right now during their four-year experience,” Sulzer said.

Sulzer said the most frustrating experience he had in the past was the huge gap between faculty and students. Faculty, students and staff all have different perceptions, yet none of them understand what is working and what is not about what they have been doing, Sulzer said.

The university has made some positive changes toward fixing this issue. For instance, they created a special living learning community called iHouse, where international students live alongside domestic students in Kent Residence Hall. Within the iHouse, domestic students plan social events aiming at bringing two groups together. Sophomore Joseph Lacovara is an event organizer who has had many interactions and living experience with international students.

Lacovara helps the iHouse community plan events such as movie nights, dumpling making and other events where students can share their cultures. From his own experience, Lacovara said the hardest part is for everyone to get out of their comfort zones.

“I think it’s mutual thing… It’s hard for domestic students and it’s hard for international students as well,” Lacovara said. “It definitely can be hard from both sides.”

Sophomore Collin Sutrick, who also is a member of the iHouse program, observed that domestic students often are not willing to open up to international students. He doesn’t have an answer to why this is happening on campus, but he is definitely on a mission to overcome this phenomenon by participating in the iHouse program.

Sutrick suggested the community should come out to the events they plan for the students. It is a great opportunity to meet some people, and maybe you get to make some friends that you didn’t expect to be friends with, he said.

“We are trying to create an environment where everybody feels welcome,” Sutrick said.