“There’s more work to do:” Targett talks state of the university 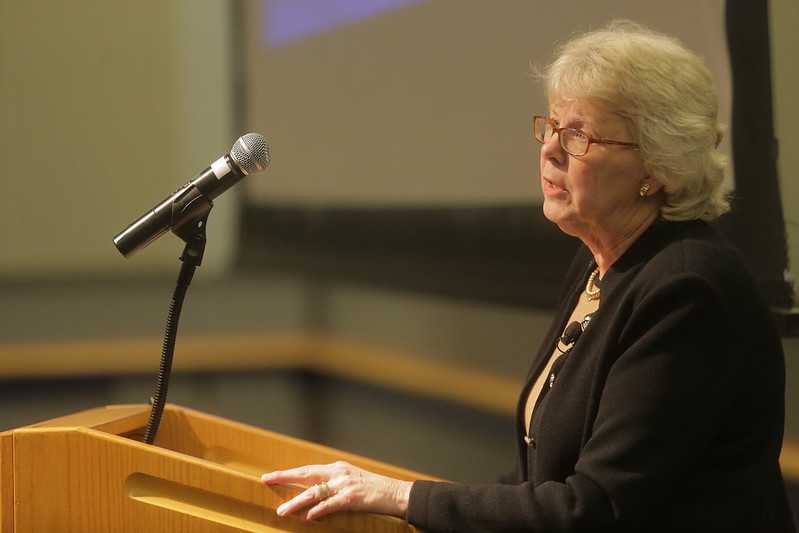 Nancy Targett wants to make sure the university community knows her name.

“Hi, I’m Nancy Targett,” Targett said while shaking audience members’ hands prior to speaking at the State of the University program Monday in Trabant University Center. “How are you?”

Addressing a room full of faculty, staff, administrators and students, Targett discussed the events of last week surrounding the Black Lives Matter protest during Katie Pavlich’s visit and the police investigation when noose-like objects were seen hanging on a tree outside of Mitchell Hall the following day.

She said she was concerned to hear about the feelings of disenfranchisement from students, but also pleased to see the success of the gathering last Wednesday and how it embodies what the future of the university should hold.

“A public manifestation of that hope is the way the tree outside Mitchell Hall looked after the painful events of last week,” Targett said. 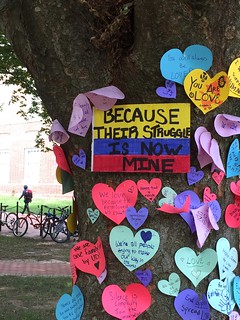 MEGAN BROWNELL/THE REVIEW
The tree outside Mitchell Hall was covered in paper hearts following the gathering on the Green.

Targett said she received an overwhelming number of messages from across the campus community. Some faculty members emailed her and said they used the opportunity to discuss racism and diversity in their classes while others sent messages wondering how they could be so blind to the race issues on this campus.

“Hearing the words of students at the gathering last week, I could hardly recognize the university I’ve known and loved for 30 years,” Targett said.

With diversity being at the top of the list, Targett spoke on issues that were brought to her attention by faculty, staff and students after asking for feedback for the first time in July.

She said the university has started to look at the issues of diversity, development, relationships, finances, affordability, student debt, enrollment and academics through the strategic planning process, Delaware Will Shine.

In terms of the results of how the university is working to tackle diversity, underrepresented minorities are now 15 percent of the Newark undergraduate population, up from 12 percent in 2010, she said.

“That’s progress, but numbers don’t always tell the story and we know there’s more work to do,” Targett said.

Targett said the first step in being heard happened at the rally on The Green last week, and she is committed to getting the issue of diversity on campus right.

Highlighting some accomplishments regarding gender equity and inclusion, Targett said the updated sexual misconduct policy has allowed for additional resources in the Title IX office and a clearer process for reporting sexual misconduct incidents.

Targett stressed the importance of building alumni relationships in order to further fundraising and development efforts. She also said she hopes to foster campus relationships among the administration and students to solve problems and move forward together.

She also addressed concerns of the university being top heavy with administrators as revealed in a study by the New England Center for Investigative Reporting showing an enormous boom in administrative hiring by the university, compared to a significant, but not massive, increase in enrollment. Targett said there are currently 27.6 full-time management positions per 1,000 students. Compared to 108 similar research universities, UD falls right in the middle of the spectrum.

The study compared the university against the other 2,640 schools included in the study and ranked UD in the top 22nd percentile of administrative hiring.

She said the recent growth in administration has been mostly in development and alumni relations in order to help increase scholarships, fundraising and faculty positions.

“It costs about 17 cents to raise a dollar,” Targett said. “That’s a very good return on an investment.”

Public safety and compliance regarding research grants and Title IX are two other areas that have seen an increase in university hiring.

Targett also discussed enrollment figures, student debt, the importance of all academic programs and the role she, and the administration, should play in solving campus issues.

“I look across the full breadth of UD from this wonderful vantage point of acting president and I am generally really proud of what I see, even as I acknowledge that we are not perfect and still have substantive work to do as a university,” Targett said.