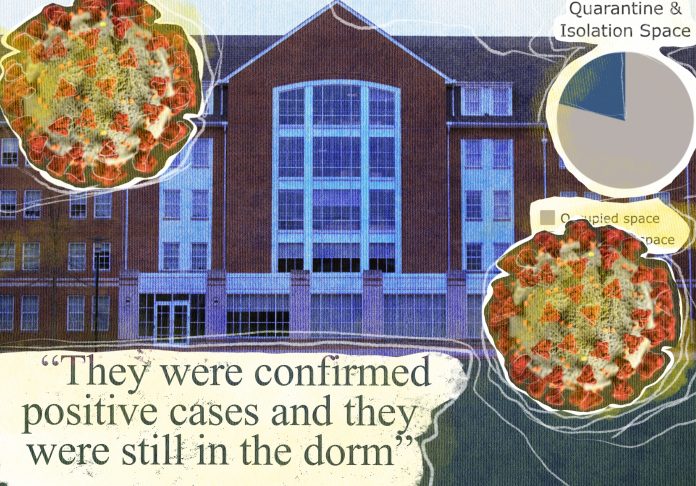 Editor’s note: No one employed by the university’s Residence Life & Housing (ResLife) was involved in the reporting or editing of this article.

After freshman Katie Snyder realized that someone she had sat across from in her dormitory’s lounge received a positive COVID-19 test result, Snyder placed her second call to Student Health Services (SHS) that day to provide them with this update and to receive guidance about the next steps she should take.

“Will I be moved into quarantine housing?” Snyder asked SHS.

According to Snyder, SHS responded saying that she should “wait it out” until she received further guidance.

At around 10 p.m. that night, Snyder received an email that said, “At this point in time we are asking that you please stay in your current residence hall room or suite as we are no longer able to accommodate any additional move-ins this evening.”

“I think it’s really interesting [that] something the university is not making apparent is there is absolutely no [quarantine and isolation] housing left,” Snyder said. “That is not what their website says.”

“A lot of freshmen that I know all over campus got COVID,” Yakim said. “And then they were told they didn’t have space for them in the isolation buildings and that they basically had to isolate in their rooms until they could come and get moved. They were confirmed positive cases, and they were still in the dorm.”

“We have had to ask several students to wait overnight, and sometimes that is because a space is being readied for that student – which means it is being vacated and cleaned … or because we were not able to arrange transportation for the evening,” Kane wrote in an email. “We make sure students are aware of expectations of isolation as best as possible during that time.”

“We have been reviewing our dashboard to understand how we can be most accurate to show our spaces,” Kane wrote in the email. “We have spaces that are unusable at times which have not been able to be accounted for appropriately on the dashboard.”

Kane noted that the circumstances causing a space to be deemed as “unusable” include facility issues, having a male space open, for instance, when no males need to isolate, and having a student who has tested positive needing an isolation room when there is only a quarantine space available.

“This is fewer than the fall as we had many more empty spaces available in the fall and because the use was so very low in the fall, we rearranged the use based on our case history and projected spring occupancy,” Kane wrote.

“The outbreak like the current one was basically inevitable if you bring so many students in,” Maxim Nikolenko, a senior political science major, said. “The most illogical thing that could have been done was to allocate less [space], and that’s exactly what they did.”

For Yakim, living with students with COVID-19 or COVID-exposure in her residence hall has been a concerning experience.

“Just knowing that there are people around here that are positive and that we’re literally being exposed just going to the bathroom and doing our day-to-day stuff because they’re not being moved out, we’ve all been stressed out about it,” Yakim said. “On top of everything else, we’re having to deal with, now we’re having to worry about getting COVID just [by] going to the bathroom.”

According to Yakim, people with COVID-19 that are in the communal-style residence halls are being told to “wipe down the bathroom if they use it.”

Freshman Hayley Skillens, who was exposed to COVID-19 in one of her in-person classes and who SHS instructed to quarantine in her dorm room, said she has also been concerned about exposing her suitemate by sharing the bathroom with her.

“They’ve now put my suitemate in a weird situation where if I have COVID, I could potentially transmit it to her,” Skillens said. “So, now I have to do the university’s job of protecting my suitemate essentially.”

Snyder added that students in residence halls also received no official notice from the university that they may be sharing facilities with those with or with exposure to COVID-19.

When Snyder, who also lives in a communal-style dormitory, called to inform SHS about her exposure, an SHS representative told her “that she would not recommend that [she] use the bathroom.”

Snyder said that the guidance about how to go about her quarantine has been unclear ever since learning about her potential exposure.

She placed her first call to SHS after learning about a potential but not yet confirmed exposure.

Snyder said they advised her that “anything [she] did was at [her] own discretion because [she] was not a confirmed exposure.”

After her fellow student informed her of their positive test, Snyder placed her second call to SHS. She received no information about how to obtain her meals while quarantining.

“I was not given information about how to get food until nine hours later,” Snyder said.

Skillens had a similar experience after SHS instructed her to quarantine in her residence hall after a positive virus exposure.

“They essentially told me, ‘Well, before you get moved to quarantine housing you can still go to Pencader to get food,” Skillens said. “I was like …  that feels a little dangerous to me.”

Referring to the situation with food and quarantining in the residence halls, Skillens said, “I can only describe it as anxiety-inducing.”

“One is to go to what has been described as [outdoor] pop-up stations …  basically that is where [I] would go to pick up a pre-packaged meal,” Snyder said. “I think this is unsafe, because now you’re putting these people who could have COVID with [other] people who could have COVID … Even though that is not prolonged exposure, that is still us being in a close space together, which is not smart.”

The other option for food for those quarantined in their own dormitories is sending an order form to either Caesar Rodney or Pencader Dining Hall and getting someone to pick it up on their behalf.

“I feel guilty for asking people to give up time in their day to help me get food,” Snyder said. “Yesterday, I didn’t get any meals picked up because I didn’t have anyone to do it for me.”

Kane wrote in an email that “[the university does] not yet have a delivery [system] set up for individual residence halls and [does] not have plans to put that in place as our expectation is that will not be needed as we are seeing case numbers decrease.”

Other students who had the same source of exposure as Snyder took the same course of action as her by quarantining immediately and contacting SHS.

“When we went to actually compare what we had found out, one of the health services people didn’t know if we actually counted as an exposure, which to me very obviously was a yes,” Snyder said. “We were given conflicting information, some of us were given more information than others, one of my friends was given basically nothing.”

Both Snyder and Skillens, who had packed her belongings into boxes once she realized she was exposed, have yet to move into quarantine housing. Snyder believes it is unlikely that she will be given a spot, as the university sent her an email, claiming “they are only requiring on-campus students to leave their assigned space if they have tested positive for COVID.”

“So, even though at the beginning of the week they were requiring people with exposures to go to the quarantine dorms, [they] changed it partway through the week,” Skillens said. “I don’t want to make assumptions but presumably because the quarantine dorms are getting so full.”

As for getting tested while quarantined in the normal dormitories, Snyder said, “It did sound like they wanted me to get tested again, but they did not give me the proper resources to do so.”

Snyder did her weekly university-sponsored COVID-19 test right before she found out about the potential exposure, but she wanted to receive another test within the five to eight day window since exposure.

She was able to get another university-sponsored screening a couple of days later, but she only learned through a friend in a similar situation to hers that to get the test and enter the facility she must show her “orange quarantine badge” on the Student Health Portal.

“Luckily, I just happened to know someone who had been inadvertently exposed and knew what to do, but that just goes to show again that the university is not giving out uniform information,” Snyder said. “It makes it really confusing for myself and other students who are just trying to stay safe.”

Skillens was given this information about the “orange badge,” however, directly from SHS.

“I want to keep myself safe and the rest of my community safe,” Snyder said. “There are people on campus who are not taking this seriously, and it’s because of those people’s negligence that I am in the situation that I am in now …  That’s not necessarily something that university can monitor, but I think that they should have been perhaps more harsh on violations right off the bat rather than waiting this long to close the dining halls, for example.”

Yakim agrees that the university’s recent restrictions may be too little too late.

“I don’t think [the restrictions are] going to help, because people are going to go out regardless, and it’s kind of unfair that they’ve been blaming it on students and not taking accountability themselves,” Yakim said. “Shutting everything down isn’t going to stop [the spread] if you’re still having people that are positive in dorms.”

Skillens added that while it would have been ideal if the university had better planning, the restrictions are the only current option.

“I think now it’s the only thing they can do,” Skillens said. “But I really think it could have been prevented by taking more precautions sooner and [having] more measures in place to deal with the amount of students they’re bringing back.”

Nikolenko believes that these decisions to bring so many students back on campus without proper planning reflects a lack of willingness from the university to prioritize student and community health over money.

“The fact that less space is allocated for quarantine … that just shows the university really cares about making profits from [the] students who are living in dormitories,” Nikolenko said.