“Thin and juiceless”: Burger King lets you have it your way 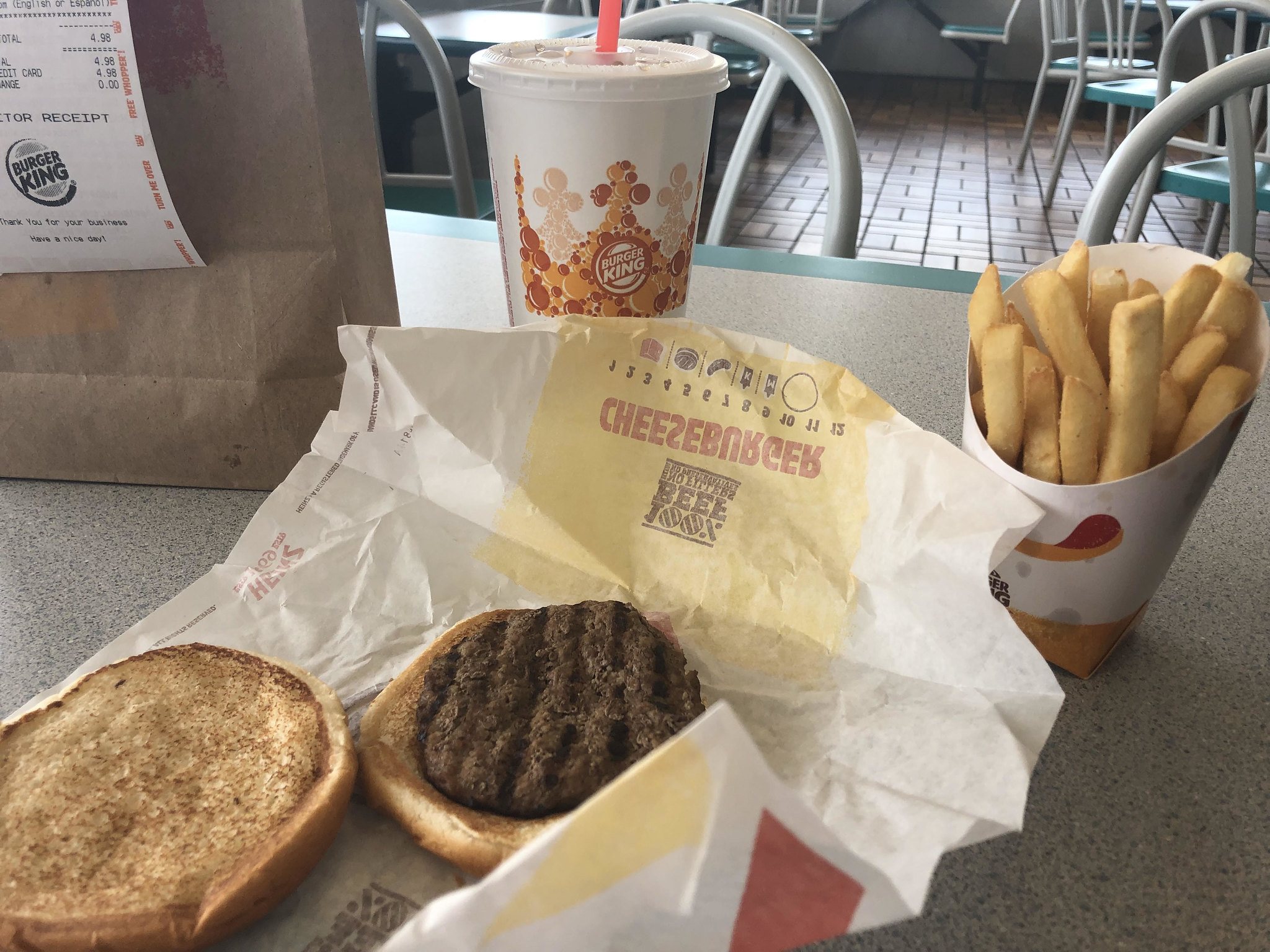 Caleb Owens/THE REVIEW
Caleb tries Burger King fast food for the first time, because he deserves to have it his way.

As the year winds down, it seems that fewer and fewer things are within your control. The bad grades pile on, you can’t find a summer internship, the rain won’t stop, it turns out you can’t actually pay the lease you signed off on for next year. But, when all seems lost, there’s hope. In an oft-forgotten, near-vacant lot behind Main Street, your kingdom awaits. Here, you can have it your way.

At first glance, the dominion is unimpressive. Asphalt and overgrown grass, an abandoned garage. But something in the air, some fragrant, sizzling flame-grilled goodness draws you closer. The ground, it seems, is saturated with burger juice, inviting you to enter the castle.

Inside, there’s little direction. No signs, the employees ignoring you, truly leaving it to you to have it your way. I stared blankly at the menu on the television — how would I decide, consume, choose from the Burger King’s personal menu? Fortunately, my food allergies — wheat, dairy, eggs, peanuts and tree nuts — reduced the pressure. Resisting the urge to indulge in a triple whopper, even if it meant I would swell up, I resolved for something simple: small fries and a plain patty.

The royal servant seemed confused, forced to do a double take. How could my way be that? With so many exquisite options, carefully prepared for my satisfaction, it was almost insulting to the King himself. But, as a food critic, I go for the alimentary elementaries, the flavorful fundamentals. I wanted to taste the meat in all of its thawed goodness, allowing the fry oil to sink into my pores.

Before digestion gets underway, allow me to lay the scene. The seating options are plentiful, but the teal seat pads don’t quite invite you to sit on them. There are no actual people around, but the high-resolution photos of friends sharing the moment, chicken fingers in hand, show you that you can have it your way alongside others. With no music, you hear only the chatter of chefs, assuming that the cursing means they’re putting great care into the food. Without air conditioning, there’s a heaviness to the aroma. You’re unable to differentiate your sweat from the grease, becoming one with the meal.

To return to that meal. Between the two sesame-adorned buns, a plain, grilled patty awaited. A bit dry, one can only suspect it was made of good, lean meat, the finest cuts of cow. Its flavor was, in a word, beefy. Thin and juiceless, the patty is just enough, leaving you refreshed and filled with protein.

As I nibbled, I nearly forgot about my fries. There they sat, still sizzling, daring me to eat them. They were hot. Very hot. Each attempted bite bit back, sparring with my tongue. These fries were tough. The first one resisted my efforts, as I flung it across the restaurant to fend off its heat. The potato cuts are thick on the outside, but lack any interior fluff — these bastards are heartless. I only had a fair match when summoning reinforcements from the ketchup dispenser. The King’s first line of defense, these fries are not for the weak.

My mouth burning, I needed help. The ketchup could only do so much. But internally, I struggled. The obvious remedy was an ice-cold root beer, sure to alleviate my burns. I was hesitant. While Burger King provides a light, filling meal, it’s not ideal for the health-conscious, no more than a Friday afternoon treat. In just four bites, I was already 400 calories deep. Root beer might tip me over.

But fear not — the King provides for all, even the health-conscious. At the fountain, I found Diet Coke. After just several sips, I was healed.

For under five dollars, I ate like royalty. You might shame me for not supporting local restaurants on Main Street, just steps away. Fair enough. But decency cannot override allegiance to the King. You could also say that I’m contributing to the obesity epidemic. But this is America — it’s about you, not your arteries. You deserve to have it your way, and the Burger King will provide.