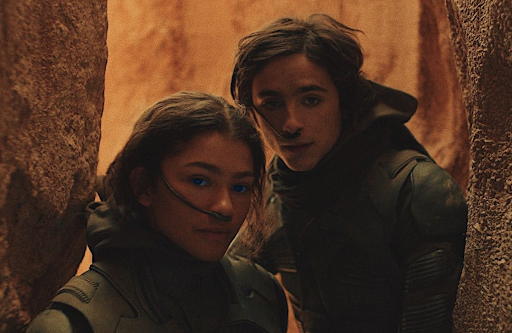 Based on Frank Herbert’s 1965 novel, “Dune” takes place far in the future and follows the story of Paul Atreides, the intelligent heir of the ruler, Duke Leto Atreides. Paul is portrayed by Timothée Chalamet in this 2021 adaptation directed by Academy Award nominated filmmaker, Denis Villeneuve. Paul is forced to mature when he finds his place within intergalactic strife and is put to the ultimate test when the Emperor calls those of House Atreides to the sands of the desert planet Arrakis.

Zendaya’s character, Chani, is a Fremen, specifically known as the Fremen wife. Throughout the course of the film, Paul and Chani have a complex and profound connection. This film adaptation is the first part of a two part installment. If picked up for part two, we will see Chani and Paul’s relationship flourish on the planet of Arrakis.

“It felt very effortless. It wasn’t like I had to go [on set] and pretend to be friends with this person,” Zendaya says. “It ended up happening very naturally, and I don’t think that we became friends because we hope that we are going to do another one. It’s just like nah, this is just someone who I really appreciate and is valuable in my life. So I think that that outside of the work part is important to have.”

This story is not just one of fear, complex family dynamics and disagreements between political entities but also a story of Paul’s coming of age in spite of all those aforementioned themes.

“I think the character we meet at the beginning of the movie [is] a young man who’s struggling with his identity, struggling with the way he is, how he is in the world, who he is, not only to himself but to his loved ones, to the people of planet Caladan and after that planet Arrakis,” Chalamet says.

Chalamet detailed how although his own coming of age story was a lot less complicated than Paul’s, the basic feelings that Paul experiences over the course of the film are not foreign to Chalamet and many others. Many adolescents struggle with finding their identity, even if they are not destined to fulfill an otherworldly prophecy as Paul is.

“I think those are things that all of us struggle with when we’re at that age and we don’t know who we are,” Chalamet says. “When we are trying to find ourselves, trying to find our voice, trying to find our identity. And hopefully you’re in an environment where you are well-supported and loved and you can find that for yourself. And then sometimes, like Paul, there’s an ulterior circumstance, something greater than yourself that pulls you out of that safe setting and forces you to grow, maybe sooner than you were ready to.”

Zendaya also touched on her connections with her character, Chani, despite her character’s otherworldly pressures and journey.

“Where I connect with Chani is that she has been through more than I have but there is a sense of a deeper wisdom to her,” Zendaya says. “And I’ve always been called an old lady. I’ve always been grandma. And I think that she has that wise spirit, in part due to both of us having to grow up in a more adult space and always constantly working with people who were so much older than us or having to be thrown into situations where you are the youngest one in the room causes you to grow up a little faster. So I think that I can relate to that sense of not necessarily being able to be a normal teenager.”

This ability for both Chalamet and Zendaya to connect with their characters on a personal level is one of the aspects that makes “Dune” so special. In the science fiction genre especially, it is crucial to give the viewers something to connect with when the story itself is not blatantly relatable. The themes and overarching struggles that each character faces humanize them in a way that makes them almost accessible to the audience.

“Some things just feel like they’re made for you and I just feel a strong connection to her,” Zendaya says of her character, Chani.

As soon as Chalamet saw that Villeneuve was involved, he knew he wanted to be a part of it. He had been an avid fan of Villeneuve’s previous work such as his 2013 film, “Prisoners.”

“I wanted to work with Denis Villeneuve first and foremost. I fell in love with the book, saw the cast that was being assembled,” Chalamet says. “Also to get to work on a movie this size that doesn’t lose any dramatic integrity, doesn’t lose any ambition in how seriously it takes itself, not in a bad way, that’s the crème de la crème, at least for me. That was my dream as an actor growing up, and it is now. To get to be in a movie that Hans Zimmer scores, that’s the best.”

This yearn to work together was not one-sided for Chalamet and Villeneuve. When asked about the process of choosing Chalamet for the role, he simply explained that there was no process. From the get go, Villeneuve knew he was making “Dune” starring Timothée Chalamet and there was no Plan B. He felt as though Chalamet brought a certain thoughtfulness and charisma to Paul that was integral to this adaptation and the believability of the future Paul was destined for.

Chalamet was not just drawn to Villeneuve’s directing and the star-studded cast when it came to the project but the complexity of his character, Paul.

“The journey Paul is on is much greater and more significant than any journey I have ever been on, but the ability to grow not only as a young man but also to face his prophecy was incredibly exciting as an actor,” Chalamet says.

There were many different facets to Paul’s character that Chalamet needed to execute wordlessly. Paul’s intelligence, his apprehension to accept his destiny and his eventual growth into a man and more importantly, a leader, are all aspects of the character that were communicated through Chalamet’s demeanor.

Zendaya felt similarly to Chalamet in that she was a huge fan of Villeneuve’s and wanted a place in this film.

“I just want to get in the room, have a shot at it. So I kind of pursued it quite aggressively. It’s an absolute dream,” Zendaya says.

Although “Dune” takes place in a futuristic universe and was written in the 1960s, its story and metaphors are not outdated, whatsoever. The core themes and overarching ideas of “Dune” are still especially pertinent more than 50 years later.

“Its themes remain really relevant. Fighting for what’s right socially, fighting for what’s right environmentally, standing up for groups that are easily oppressed but don’t have the agency to fight back,” Chalamet says. “If young people can relate to what Chani or Paul are going through at the center of it, and can also intake themes that sometimes fly above my head, then we really succeeded.”