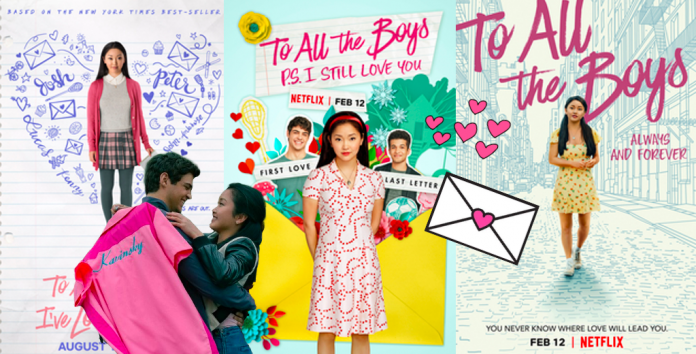 The long-awaited final installment of the movie adaptations of Jenny Han’s trilogy is here. Hitting Netflix on February 12th, “To All The Boys: Always and Forever” has received many positive reviews, so I’m only adding mine to the long list.

Continuing the captivating teen love story between Lara Jean Covey (Lana Condor) and Peter Kavinsky (Noah Centineo), this time around they’re faced with the prospect of college. Lara Jean and Peter start with the plan that they will both attend Stanford University, Peter on a lacrosse scholarship and Lara Jean in their English Literature program. However, as Lara Jean gets rejected from Stanford, all of her and Peter’s plans of spending college together are upended. This is only further exacerbated by their senior trip to New York City.

As Peter and Lara Jean navigate the obstacles of potentially not going to college together and then, when Lara Jean falls in love with New York University (NYU), going to college 3,000 miles apart, you watch them shift their priorities but still see their love grow.

I loved the character arcs that Lara Jean and Peter had. Lara Jean remembers to stay true to who she is and follow her heart, and Peter supports Lara Jean, sticking by her, even though he physically can’t be there, is very important for their story but also for the audience to take away from the movie as well. I think that being authentically yourself, your partner being your supportive cheerleader and vice versa is incredibly important.

The supporting characters incorporate a lot of the humor in the story. I don’t think I’ve ever laughed so hard at her iconic lines as I did when watching Kitty (Anna Cathcart) sass the others and show her bubbly spirit throughout the film. Christine (Madeleine Arthur) and Lucas (Trezzo Mahoro) displayed that as well, through their support of Lara Jean as her best friends.

Dr. Covey (John Corbett), Trina (Sarayu Rao) and Margot (Janel Parrish), however, embody stability in Lara Jean’s story. Constantly being there for her and giving her the advice she sometimes doesn’t want to hear, Lara Jean’s father, new step-mom and older sister are her rocks throughout her development in this story.

The roles each of these characters play in the story are vital to Lara Jean’s personal growth and the growth of her and Peter’s relationship, as well as making the movie all the more enjoyable to watch.  Aspects of the film, such as the graphics and the scenic shots throughout, also make the movie more entertaining because they add to the aesthetic and cohesiveness of it.

The graphics are also representative of Lara Jean’s love of creating. The look of the line drawings, especially when they show as a map when the characters are traveling and just outline the set in other places, or when they serve as title screens, almost for certain scenes are all a nice touch to encapsulate the ever-present theme of the glory of pen and paper in the film and also the idea that this is a teen romance. If they weren’t there, I don’t think my opinion of the movie would have changed that much; however, I think it made the film that much better.

“To All The Boys: Always and Forever” continued Lara Jean and Peter’s story beautifully. I fell in love with Lara Jean and Peter’s relationship with the first movie and, admittedly, was disappointed in the second one. Seeing as the second film didn’t quite live up to what I had hoped, I was apprehensive with whether the third one would continue the decline or if it would be an improvement. I went in giving the movie the benefit of the doubt and was not disappointed. This film gracefully ended the trilogy. However, it left the audience wanting more.

Peter, Lara Jean and all of their friends are at college or wherever they’re meant to be. Loose ends in the story have been tied up. Lara Jean and Peter are happy writing love letters across the United States. What happens now? What hurdles will they face now at different schools in different states? The books the films are based off of are a trilogy and there are no plans at the moment to make a fourth movie for Lara Jean and Peter’s college years. Something is bound to happen, but I guess we may never know.