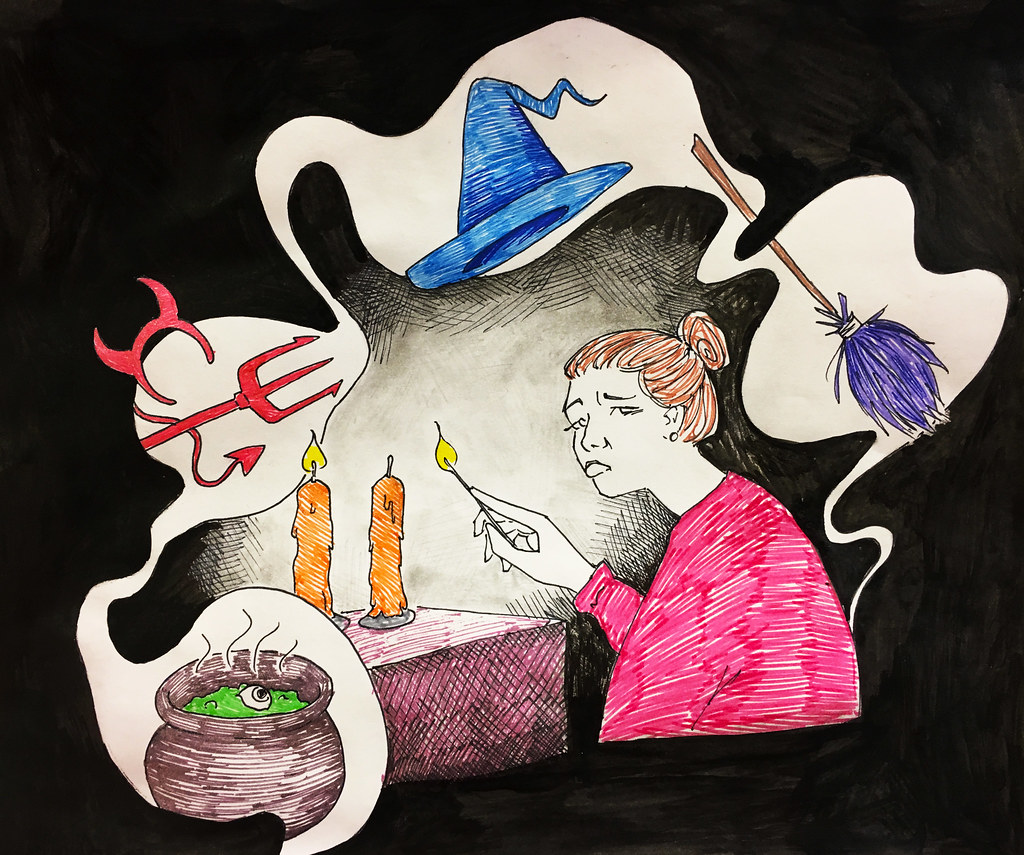 Sam Ford/THE REVIEW
Many witches regularly confront others’ negative preconceptions about their practice, which typically include incorrect associations with Satanism.

Bringing up witchcraft in a room full of people elicits a strange response: typically, people immediately become skeptical and scared, associating the practice with satanism and the past. However, witchcraft still thrives today, even on university campuses. With solitary witches practicing throughout the university’s campus, as well as a few covens — groups of witches that choose to practice together — scattered throughout the state, the misunderstood practice still remains more topical than ever.

One of the largest misunderstandings surrounding modern witchcraft is its association with religion and satanism. As Wren Lewis, a junior studying applied nutrition and a practicing witch, explains, witchcraft is less of a religion and more of a spiritual practice.

“Some people are even Christian, but they’re also witches,” Lewis says. “Witchcraft itself is a practice, kind of like meditation is a practice, and meditation has really strong ties with religion and philosophy, but anyone can do it.”

Often, when people mistake witchcraft for religion, they are confusing it with Wicca. Payton Eubanks, a senior at Full Sail University and a Wiccan, breaks down the difference between the Wiccan religion and witchcraft.

Lewis also makes a clear distinction between witchcraft and the Wiccan religion, emphasizing witchcraft’s spiritual aspects. For their daily practice, Lewis — who practices “eclectic witchcraft,” defined by an amalgamation of different ideas and religions — typically lights candles in a small altar at the beginning of the day. They also practice tarot as a form of divination, doing readings for themself and their friends.

Although currently a Wiccan, Eubanks was initially a witch. For her practice, she enjoyed collecting gemstones and creating potions, acknowledging that she likes to practice “a little bit of everything.” She also mentions the importance of the pentacle motif.

“People think the pentacle is some evil satanic symbol, and it’s not,” Eubanks says. “The pentacle just represents the five elements that we use. Everyone thinks it’s satanic and unholy but it’s not.”

Society’s association with symbols of witchcraft and satanism make it difficult for witches and Wiccans like Lewis and Eubanks to be open about their religion and spiritual practices.

“When you tell the average person, ‘Yeah, I’m a witch,’ they’re going to think of Harry Potter and that you believe in all this weird stuff,” Eubanks says. “It’s actually not like that. It’s more spiritual.”

Lewis echoes her sentiments, describing the reactions of her parents and others to her spiritual practices.

“People have generally been very speculative, but as soon as I explain, they understand,” Lewis says. “Older generations are not so much that way. For example, my parents just think it’s like some weird fanatic hobby. That’s kind of disrespectful.”

Like other spiritual practices, such as meditation, both Eubanks and Lewis believe that they have found peace through witchcraft. Lewis, who did not grow up a religious person, finds that witchcraft has added some routine to their daily life. They explain that they view the daily practice of witchcraft as equivalent to acknowledging a god or goddess, making a gratuity list in the morning or even sitting down to a meal with one’s family.

“It’s made me a more relaxed person, [and] given me [a] daily ritual that I think modern society has lost the significance of,” Lewis says. “It’s given me a sense of inner peace I’ve never had before.”