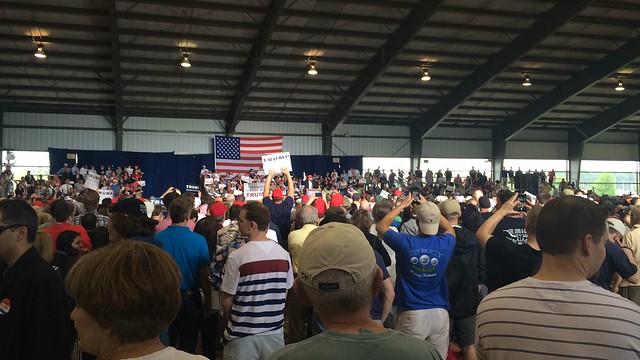 BY MATT BUTLER
EDITOR IN CHIEF

Despite the state’s reputation as a liberal stronghold, Trump’s rally drew thousands, packing the bleachers in Quillen Arena at the Delaware State Fairgrounds. Trump signs, American flags and T-shirts advocating a Hillary Clinton prison sentence were the most popular items among the crowd. That same crowd also included a young man prancing through the crowd for the duration of Trump’s speech wearing a full-body rainbow unitard and a Trump mask.

The Republican frontrunner opened with a joke about how little he had spent campaigning in Delaware, playing off the state’s notoriously friendly corporate tax laws.

“I said, ‘how many entities do we have registered in Delaware?’” Trump said. “I figured they’d say two or three. It’s 378. So we have 378 entities registered in the state of Delaware, meaning I pay you a lot of money, folks, I don’t feel at all guilty.”

Trump’s message stayed much the same as it has throughout his dominance of the Republican nomination race. Mainstays such as his plan for a Mexico-funded wall at America’s southern border and condemnation of current international trade policies were emphasized, drawing roars and a chant of “Build a wall!” to the former.

“Who’s going to pay for it?” Trump said.

“Mexico!” the crowd answered in unison.

Other popular themes from the rally included Trump going back to his “Lyin’ Ted” nickname for fellow Republican candidate, Texas Senator Ted Cruz, as well as admonishing President Barack Obama for what Trump deems as the weakening of the American military during his administration.

Perhaps the loudest cheers from the crowd arose when Trump mocked Obama over the President’s recent visit to Saudi Arabia. If the Saudi monarch hadn’t greeted Trump during a visit, he said, Trump would have told his airplane pilot to fly back to the United States. As per usual, Trump also announced his intention to “make great deals.”

Ted Field, 46, of Glen Mills, Pennsylvania, was in attendance and said he is primarily a fan of Trump’s as a result of his political outsider status, a common theme among Trump supporters. Field said he is a lifelong Republican, but has considered switching his registration to Independent based on his anger at both major political parties.

“I don’t know if, directly, he’ll be able to get Mexico to pay for it, but I don’t care if we pay for it, I just want the wall,” he said. “Just like you have a front door to keep people out, we need a front door. For that amount of money, I’d be willing to invest in that, for our security.”

Field said he views Trump as a “common-sense conservative”, as opposed to Cruz and Kasich, particularly when it comes to certain issues surrounding abortion such as rape or incest.

“I’m a Republican, but there’s some things you got to be willing to bend on,” he said. “You got to have common sense. You got to give a little bit.”

There has been a lack of presidential polling in Delaware, but polls from RealClearPolitics in Pennsylvania and Maryland show Trump with a commanding lead over Cruz and Ohio Governor John Kasich.

Contrary to some Trump rallies in March, this event saw no trouble between Trump supporters and protesters. The lone visible incident came as Trump’s speech was winding down, when two people revealed signs stating “Will trade 1 Donald Trump for 10,000 Syrian refugees” and “Shore don’t like bigots like Donald Trump”.

Both were peacefully removed by campaign staffers after about a minute. Other news sites have reported similar disturbances among the crowd, but all were minor. A Ted Cruz supporter in the parking lot also mounted a large sign in the bed of his pick-up truck that said “Donald Trump is STILL a Democrat.”

Delaware’s primary takes place on Tuesday, April 26. At press time, neither Cruz nor Kasich had announced plans to visit Delaware prior to or on the day of the primary.