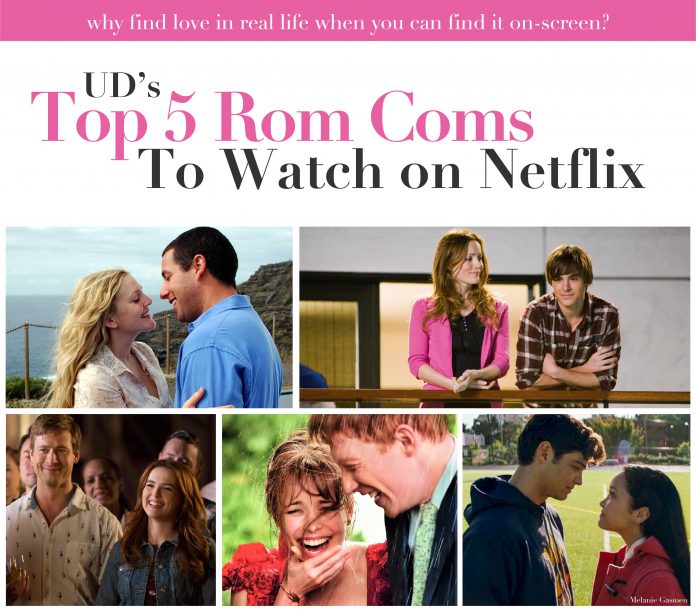 As it’s the season of love, it’s also the season of watching rom-coms, especially with your galentines and palentines. As a hopeless romantic and, thus a fan of rom-coms myself, I compiled a list of the top 5 rom-coms on Netflix according to University of Delaware students via an Instagram Story question box and poll.

Most popular with students is “50 First Dates,” starring Adam Sandler as Henry and Drew Barrymore as Lucy. This romantic comedy is also definitely a tear-jerker. While it’s hilarious from the beginning, the growth of the relationship  as Henry and Lucy learn more about each other is what makes it really emotional. As Lucy suffers from  short-term amnesia, Henry has to reintroduce himself and Lucy has to re-learn everything about him and their relationship every single day.

You get hooked on this unique storyline and the relationship between Lucy and Henry. Barrymore and Sandler do an amazing job portraying these characters and bringing in the humor and tender moments between Lucy and Henry seamlessly. Despite not remembering anything from the day before when she wakes up every morning, you can still see growth from Lucy, and Henry develops along with her as he navigates Lucy’s condition and their relationship.

The way Henry shows up for Lucy every day is so sweet and Lucy shows so much strength as she learns about her condition and what has happened since her accident. This movie made me laugh and cry at the same time, so definitely watch this one if you want to get emotional.

This one is my favorite movie, so I’m really excited that it’s also a favorite of some students. The epitome of the ever-enticing “fake dating” trope, “To All The Boys I’ve Loved Before” follows Lara Jean Covey (Lana Condor) as she starts “dating” Adler High heartthrob and lacrosse star, Peter Kavinsky (Noah Centineo). Lara Jean agrees to this stunt that Peter suggests in an attempt to cover her tracks after letters she wrote to her past crushes (including Peter) get mailed out and so Peter can make his ex-girlfriend jealous.

As a writer and a hopeless romantic, all of the letters they write to each other and the cute things they do even if, at the beginning, it’s only to convince other people they’re dating, are probably my favorite parts of the movie. Something else that I loved about this movie is Lara Jean’s relationship with her family. Family means a lot to me, and I’m super close with my sisters. Seeing how close Lara Jean is with her sisters, Margot (Janel Parrish) and Kitty (Anna Cathcart), as well as her dad (John Corbett), added another important layer to the movie for me.

The growth within and outside of the relationship that Lara Jean and Peter undergo is prominent as they handle fake dating and developing true feelings for each other. The growth continues in the second movie, “To All The Boys: P.S. I Still Love You,” which was released in 2020 and, I can imagine, also in the final installment of this trilogy based on the books by Jenny Han, “To All The Boys: Always and Forever,” which came out on February 12th.

In this film, Tim (Domhnall Gleeson) has the ability to travel back in time throughout his life, as all of his male relatives on his father’s side have been able to. He mainly travels back in time to try to get a girlfriend but soon learns that traveling back in time can’t make someone fall in love with you —  how you utilize that time is what’s important.

Tim learns a lot about his family and himself as he manages his time-travelling abilities. However, what I think is the theme and best part of this movie is the reminder to live every day like it’s your last and as if you chose to travel back to each day to relive all of the wonderful things about it. I love that reminder to really live in the moment and take a step back to notice the little things that make every day special.

Tim learns to relish the time he has with his wife, Mary (Rachel McAdams), their kids and the rest of his family. So, while it definitely is the love story between Tim and Mary, I think this movie is also a story about the love Tim’s entire family shares.

“Set It Up” takes place in New York City, where hard-working and overworked assistants Harper (Zoey Deutch) and Charlie (Glen Powell) set up their bosses, sports journalist Kirsten (Lucy Liu) and business mogul Rick (Taye Diggs), in an effort to lighten up the workload that’s constantly placed on their shoulders.

It’s heartwarming and funny; it’s easy to see why this is a favorite. You root for Charlie and Harper’s efforts with their bosses but you can catch the subtle changes in their own relationship as time goes on. The secondary characters such as Harper’s roommate Becca (Meredith Hagner) and Charlie’s roommate Duncan (Pete Davidson) add another layer of humor as well as more dimension to the main characters. It’s also easy to identify yourself in any of these characters, whether it’s as a writer hellbent on impressing your boss and receiving mentorship, a businessperson looking for a way to make the most money or a roommate supporting your best friend. Even if you can’t identify with the characters, at least the sage advice from Becca and Duncan may resonate with you. With their supporting roles as best friends and roommates with the two, Becca and Duncan are integral parts of Harper and Charlie’s growth throughout the film.

I am also a fan of little moments, cute lines and inside jokes, which this movie certainly doesn’t lack. From pizza thrown in the fire escape to “I like you because, I love you despite,” I enjoyed this movie from start to finish. It was so cute and I’m definitely watching it again.

In “17 Again,” after finding himself kicked out of his house and fired from his job, Mike O’Donnell (Matthew Perry) wishes to go back to high school before everything seems to go downhill for him. Finding himself as a high school student again, young Mike (Zac Efron) needs to find a way to make his life right again. He becomes friends with his son Alex (Sterling Knight), is constantly meddling in his daughter Maggie’s (Michelle Trachtenberg) love life and gets on the basketball team.

There were many heartwarming scenes between Mike and his kids as he began to bond with and learn more about them, although sometimes it got a bit awkward. Mike goes through a lot of personal growth throughout the film as he is reminded what is important and who he needs to be for his kids and his wife.

Romantic comedies are designed for the audience to root for the main characters and feel emotions with them, experience how relationships grow and overcome obstacles. Whether it’s laughing, crying, getting frustrated or feeling awkward, these five rom-coms recommended by students are filled with characters you’ll get attached to and will take you through a rollercoaster of emotions.