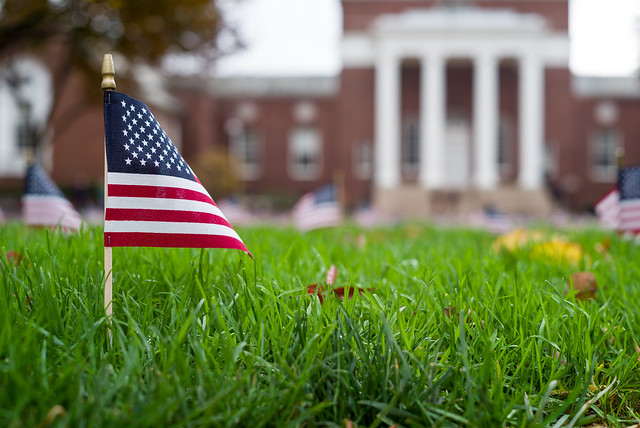 Evan Krape/THE REVIEW
The university has let down its student veteran population.

It was Todd Glessner’s first day at the university. The tiny wooden desk barely accommodated his 6-foot-3 frame. His eyes, black enough to lose an iris, stared at the professor with an intensity that could spark a flame. In the seat to his left, a student blatantly texting and nodding off during the lecture. In the seat to his right, a young woman, face illuminated by a laptop, shopping for dresses online.

Glessner rapped his knuckles under his chair. How good it would feel, he thought, to get up out of his desk, walk over to the guy texting and snap the phone like a Saltine. How righteous it would be to close the laptop and fling it like a frisbee out onto The Green. But he didn’t, begrudgingly.

The staff sergeant knew he was in a different place now. Just 10 days before coming to the university, Glessner was in Afghanistan, an explosives contractor with the Department of State.

Glessner is among the 215 veterans attending the university. He is vice president of the Blue Hen Veteran Club (BHVC), a student organization that seeks to establish a community of military personnel on campus. They come to Delaware on the G.I. Bill, funded from the Department of Veterans Affairs (VA). Many have seen combat. Some are still active in the National Guard, like Glessner, and may be called to leave at any moment.

“We have grown exponentially over the last couple of years,” club president Brandon Bristor, who came to Delaware after four years in the Navy, said.

Both Bristor and Glessner touched on the transition from the coarse and regimented life in the military to civilian life— an incredibly emotional ordeal. The military is engineered to completely shift a soldier’s brain—think the way the military wants them to think. It conditions them. It surrounds them with the same unit; they fights alongside the same unit. Their unit is their family. This cohesiveness and camaraderie make up an identity. They are no longer an individual, just a piece of a larger whole. And then they leave. They are without their unit, without their identity.

This does not include the immense and irreversible trauma one may experience in combat.

“It’s in a veteran’s nature to not seek help,” Bristor said. “We figure out things ourselves. It’s a thing of pride. You put your game face on and deal with it. It’s ingrained in you.”

Veterans don’t like to seek help: That’s a fact. Their rate of suicide is 50 percent higher than average Americans with the highest chance occurring three years after deployment, which is most likely the time when a veteran would utilize the G.I. Bill.

“It gets hard sometimes,” Glessner said.

“I still keep my eyes out, I sit in certain parts of the classroom. I don’t really appreciate it when doors are slammed,” Glessner said.

He said there’s a stigma—people don’t talk about mental issues.

“It carries over into civilian life,” he said. “I’d rather suck it up.”

When veterans transition to academics, often the resources that would support that transition are slim.

In order for veterans to receive the benefits from their G.I. Bill, they must work alongside the university’s registrar office. After acceptance, veterans file their benefits with the university, which then certifies their enrollment. Every veteran must do this at the start of each semester. The information is then sent to the VA, which sends back confirmation, along with a stipend for the veteran.

This task was once done by Janice Fry, but after her retirement the university opted not to rehire. There is now no staff member listed as responsible for veterans benefits on the registrar’s office website.

Instead, they distributed her tasks among three employees who already worked full-time in the registrar’s office.

The transition has been bumpy. Bills and documents got backed up, which meant veterans didn’t get paid last year. On numerous occasions, university veterans were unable to purchase their class books, sometimes waiting as long as a month into the semester.

Veterans were not able to pay for their classes, hindering them from selecting and enrolling for the next semester. The veterans could not pay their rent.

In addition to this, the VA pays a stipend to the university to hire a veteran as work-study, as a way to aid the office.

It wasn’t until a meeting with Sen. Chris Coons (D-Del.) that one veteran was given his stipend, after going an entire semester without one.

While the university delays communication with the VA, late fees begin to rack up, which the veterans are responsible for paying.

“It’s just a lot of stress on top of already being a student,” Bristor, who spent his four years stationed in the Kingdom of Bahrain routinely holding an assault rifle, said.

As soldiers prepare to leave the service, they are enrolled in a “Transition Assistance Program,” a three-day course that covers the essentials of the professional world: building a resume, mock interviews and the cautionary practice of filing for unemployment.

“It was crap,” Bristor said.

Bristor didn’t know about the crisis help-line until he saw a poster in the BHVC office. He said veterans aren’t told about mental health support. They aren’t informed about support groups, let alone groups like the BHVC.

“I had no idea, there was something like a veteran group on campus,” Bristor said. “We have to figure everything out on our own.”

With regards to filing for VA benefits and accessing the proper resources, veterans don’t get any additional help.

Starting in 2010, a group of university administrators met to discuss Veteran affairs. This group soon evolved into the Campus Veterans Working group, aimed with the goal of elevating the agenda of Veterans. This groups includes not only the BHVC, but also ROTC, and Admissions and Registrar offices.

“We want them to know these services are available,” Dean of Students Jose Riera said.

When commenting on the failure to provide support to veterans, Riera describes the situation as a “perfect storm…and it’s taken us time to get back but I think having the working group has allowed us to rebound quicker”

With our volunteer military, thanking a soldier for his service is a controversial acknowledgement, whether sincere or not. These men were given a guaranteed job, full benefits and college tuition. That’s all they’re asking for—what they were promised.

In the rearview window of his car, Glessner still keeps the acceptance letter he got from the university— one of the proudest days of his life.