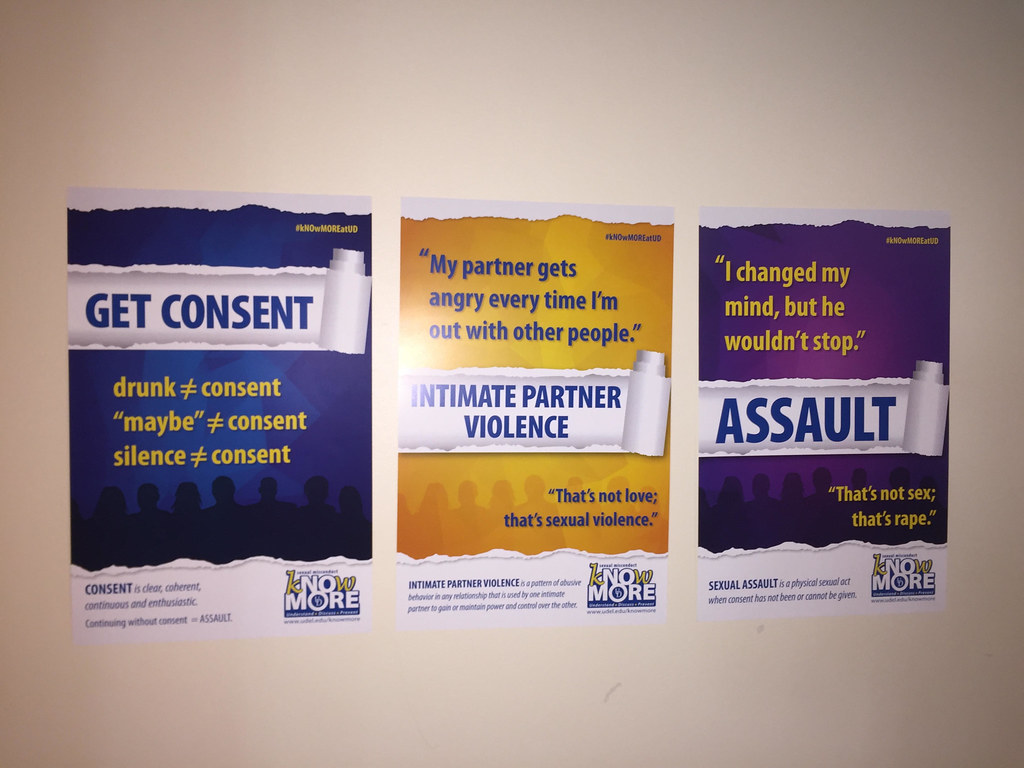 OLIVIA MANN/THE REVIEW
Nearly two years after launching the “It’s On Us” campaign, the university’s Office of Equity and Inclusion has began its kNOw MORE campaign to address sexual misconduct and gender-based violence on campus.

Roughly two years after President Barack Obama, alongside university alumnus and Vice President Joe Biden, launched the “It’s On Us” initiative, the university’s Office of Equity and Inclusion has introduced the kNOw MORE campaign.

The university’s kNOw MORE campaign addresses sexual misconduct and gender-based violence. The campaign has been under consideration since last May by the Office of Equity and Inclusion in collaboration with the Sexual Offense Support group and the Sexual Assault Prevention and Education Committee (SAPE).

From the very beginning, a student advisory board was formed for the campaign. Student involvement continues to this day, with the creation of a kNOw MORE ambassador group.

“This semester, we want to define what sexual misconduct is; it is not just sexual assault,” said junior Megan Bittinger, a kNOw MORE ambassador and SAPE committee member. “It is rape, it is stalking and it is harassment. In the winter, we plan to focus on survivor support. In the spring, we plan to focus on reporting. Reporting does not consist of a huge investigation; it is a personal and confidential conversation.”

“Through that mobilization and utilization, well-informed students, their peers and the whole community can prevent and end sexual misconduct,” Carson said.

Largely, the campaign was directed as a response to a campus climate survey conducted last spring. This was the first-ever campus climate survey to examine the scope of sexual misconduct on campus, students’ attitudes about how the university handles sexual assault and their knowledge of the resources available.

“From that survey, we realized students did not necessarily understand sexual misconduct,” said Adam Foley, program coordinator of the Office of Equity and Inclusion. “That same educational piece became our guiding direction.”

“This campaign was built and continues to grow within the framework of student language,” Carson said. “For instance, the campaign posters include scenarios and statements that are not unfamiliar to students on this campus and college campuses everywhere.”

The campus climate survey, along with conversations with students across campus, led to the decision to begin the creation of the campaign.

“It started with conversations,” Foley said. “And we need to continue to have conversations. When we engage in a dialogue, folks are more apt to not only recognize sexual misconduct, but they are more likely to be active bystanders. By instilling confidence and knowledge in folks, they can become the solution.”

The kNOw MORE campaign could not come at a more decisive time, as issues such as sexual misconduct, abortion rights and LGBTQ rights are proving pivotal in this year’s presidential election.

More locally, the university’s campaign is incredibly timely, as the House of Representatives of the General Assembly of the Delaware State Legislature recently passed a House Bill which will mandate sexual misconduct training for all “responsible employees,” effective next June.

“Last fall, we instituted online training for all of our employees,” Sue Groff, the university’s Title IX coordinator and the director of the Office of Equity & Inclusion, said. “And we will continue to do that. But now, our training will align with the new House Bill, effective next June, which will mandate that all ‘responsible employees’ at institutions will have to complete the training.”

The campaign aspires to create a dialogue between all students, faculty and staff at the university, thus creating a campus culture of intolerance for sexual assault and harassment. The campaign is student-driven and focuses on student awareness.

“The brand ambassadors can also serve as advocates,” Bittinger said. “We are just another front to support and help students in getting the resources they need.”

Groff also noted the flexibility of the kNOw MORE campaign. While the campaign is student-focused this year, and maintained as a campaign for everybody, it is possible the campaign may have a different focus next year; as the university has yet to survey its employees in the area of sexual misconduct.

Groff specifically spoke about the Honors Program’s relationship with the Office of Equity and Inclusion, which is a relationship she hopes will become a model for other academic units on campus.

“We are seeing results,” Groff said. “We are receiving more foot traffic and we are connecting more students to resources. Policy is great, but the university’s commitment to this issue goes far beyond that. One disclosure [of a student’s experience with sexual misconduct] merits the last two years; we have had more student foot traffic and more student self-disclosures [this year] so far than I have had in my previous two years.”

One event closely linked to Monday’s launch of the kNOw MORE campaign was Jackson Katz’s visit to campus.

Katz is an educator, author and filmmaker who is internationally renowned for his pioneering scholarship and activism on issues of gender and violence. In his lecture titled “More Than a Few Good Men: The State of American Manhood,” he spoke to university students about the important work of ending gender violence.

“We are endlessly focused on what women are doing and thinking in relationships or elsewhere,” Katz said. “But, what we need to be focused on is how we can change the socialization of boys and the definitions of manhood that lead to these current outcomes.”

“At the heart, this is a university initiative,” Foley said. “This is a priority for everyone. There is nothing controversial about preventing and ending sexual misconduct on campus.”