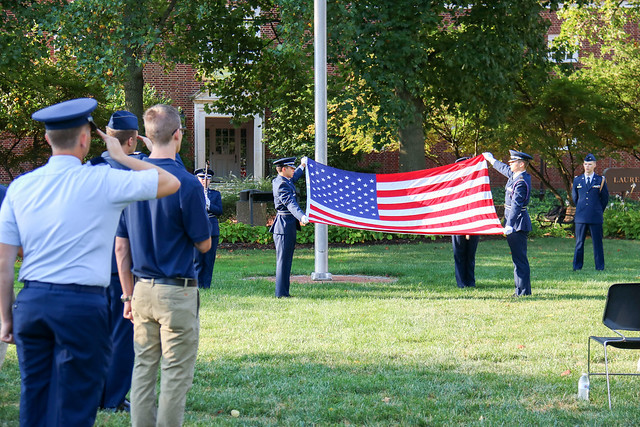 BY MEGHAN JUSCZAK
EDITOR IN CHIEF

When junior Mark Footerman came to the university as a freshman, he “had no idea what he was doing.” As one of the university’s 235 identified student veterans, he was much older than all of the other freshmen, and said he couldn’t find anyone to relate to.

“I doubted everything — I doubted being here,” he said. “I almost dropped out in the fall and got very close. It wasn’t until spring semester when I met some of the guys in [Blue Hen Veterans] — that’s when I got involved, and that’s when my life on campus really took off in a positive direction.”

Footerman now serves as president of the Blue Hen Veterans (BHV) Registered Student Organization, which has 72 active members on Student Central. Like the other members of BHV’s executive board, he has spent his college career advocating for student veterans, particularly as they transition from military to college life.

In the past, Footerman said, veterans would have to stumble upon the BHV table at activities night or specifically seek out the RSO. This resulted in many student veterans feeling like he did his first semester — isolated from any sort of community.

In addition to these difficulties, last year several student veterans did not receive their VA benefits in a timely manner due to a backlog in the registrar’s office. This meant some were unable to pay for basic items, like textbooks or rent.

However, after years of advocacy from BHV and those involved in the Campus Veterans Working Group, most of these issues will be resolved in the upcoming months.

The university recently announced that it is hiring a coordinator for veteran affairs, a brand new position. The application was released a few weeks ago, and will close Sept. 23. Jeff Palmer, the university registrar, said his office has already received more than 60 applications, primarily from veterans. He said he hopes the position will be filled by November.

While the new coordinator for veteran affairs will mark a major victory for the BHV, Footerman said the group also has been celebrating the introduction of a New Student Orientation (NSO) program for incoming veterans that began this summer.

Last year’s BHV executive board competed in the First Step entrepreneurship competition through the Horn Program, Footerman said. They identified a problem — veterans’ not fully integrated into campus life and not receiving their benefits — and created a solution: an NSO program that would connect them with the BHV and relevant campus resources before they began in the fall.

The group won the first prize at the competition and paired with the NSO office to pilot two different days of veteran-specific orientation. A total of 20 incoming veterans were identified, and 16 ultimately attended the NSO program, Footerman said. Those veterans who went through the program have remained involved with the BHV since, and have said they are comfortable with the campus resources.

At their meeting on Wednesday, the Campus Veterans Working Group agreed that the new program was a success. Dean of Students José Riera, one of the members of the group, said the student veteran orientation and the hiring of the new coordinator will result in the university being named a military friendly institution for the first time. This will be recognized in the 2017 list by the Military Friendly Schools guide, he said.

“It’s similar to the LGBT ally program, but for student veterans,” he said. “It will let those students know there are people on campus who are aware of the resources for veterans and the issues they face.”

Despite all the recent gains for student veterans, Footerman said the BHV will continue to advocate on their behalf. There are always elements of university life that could improve for veterans, he said, especially within the culture of the student body.