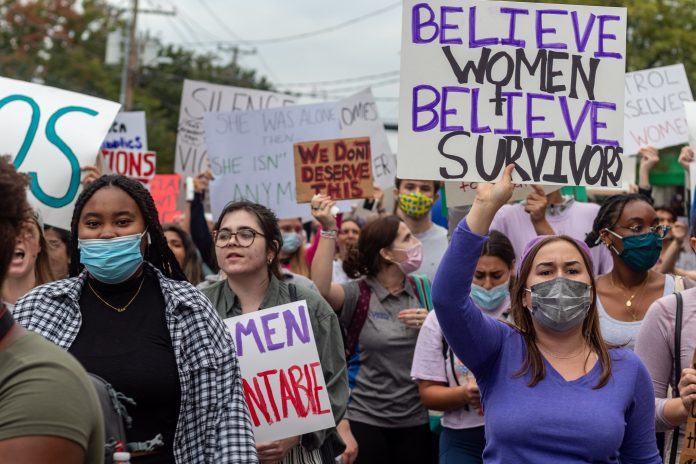 Hundreds of university students took to the streets again this evening to protest the university’s response to gender-based violence on campus.

The string of protests, including one today and two yesterday, occurred after Brandon Freyre, a sophomore at the university, was charged with kidnapping, assault and strangulation of a female victim on Oct. 11.

The protesters demanded that the university implement policies requiring fraternity leadership boards to investigate and report on issues of sexual violence within their organizations. They also  demanded that there be more blue lights on campus and that all fraternities require full completion of sexual assault prevention training.

Many of the students at the protest called for Freyre’s expulsion from the university. However, Andrea Boyle Tippett, the university’s director of external relations clarified that a decision on expulsion would only be made after Freyre has “gone through the justice process.”

“The incident happened Friday, early morning, and he was banned [from campus] on Friday,” Boyle Tippett said. “On Monday, he was officially separated from the university, which means that he can’t access any on-campus, anything: no activities, no classes, nothing.”

As the protesters marched down Main Street, they chanted “silence is compliance,” “your brother, your responsibility” and, in reference to university President Dennis Assanis, “where is Dennis?”

“It’s important that Assanis stand with the students of the University of Delaware if he wants to make a stand at all because we are the ones who are trying to promote change and make a difference here,” sophomore Rose Pristas said.

“It was empowering,” junior Alexis Mainiero said. “I was so happy to see so many people out supporting us today.”

Domenick Rathof, a freshman at the university, echoed Mainiero’s sentiments.

“I feel that the response this week was tremendous, especially with today’s turnout,” Rathof said. He also said that it is “especially important to have more men showing up to these protests, that way it shows the university that everyone, not just women, are sick of these problems and everyone needs and wants them to be solved.”

After being criticized by students for its silence, the university released a statement at 9:00 p.m. on Oct. 12 from José-Luis Riera, vice president of student life, and Fatimah Conley, interim chief diversity officer, regarding the incident.

At the time of this article’s publication, no statement has been made from Assanis.

“We are writing to acknowledge the harm inflicted, denounce the violence reported and call for our community to come together and advance our goals of a campus climate free of all violence, including gender-based violence and violence against women,” Riera and Conley wrote.

Many students thought that the university’s response came too late.

“When such a violent assault happens like this and they don’t even send us a message until it has become a national topic, [it] is performative,” sophomore and protest organizer, Kiera Spann, said. “They care more about their reputation than their students.”

The statement also emphasized the availability of resources to support students, such as Sexual Offense Support, the Center for Counseling and Student Development and the UD Helpline.

“[The statement] was such a slap in the face to students who have experienced [gender-based violence] or are affected by it, for them to still try to remain as neutral as possible,” junior Morgan Wright said. “I feel like that’s been everyone’s problem with Assanis lately, is that he just keeps trying to stay neutral instead of taking stances on issues that affect students on such personal levels.”

In the university’s statement, Riera and Conley also wrote that Freyre’s former fraternity, Kappa Delta Rho, permanently revoked his membership. Amid criticism, the fraternity’s role in the incident remains uncertain.

“At this point, we do not have information that connects the fraternity with this specific incident,” Riera and Conley wrote. “If information is discovered or presented that alleges the fraternity’s involvement, we will initiate the Student Conduct Process.”

Boyle Tippett said that any further actions that the university would be taking would be “publicly communicated” to students.

“We, as a student collective, we want to be reassured that changes will be made,” freshman Chris Credden said. “And I mean, not only that the person gets expelled, because a lot of us want that, but that there should be some change.”

According to Spann, she and other student organizers are planning more protests for the near future to put pressure on the university. Their goal is to see changes in official policy that will protect students from violence on campus.

“Until something changes, we are not going to stop,” Spann said. “If we stop now, the university is going to wait until it gets quiet and sweep it under the rug. I’m sure that’s their plan already because they’re under such a microscope. We’re not gonna stop.”