Valerie Biden Owens on the “potential to be better” 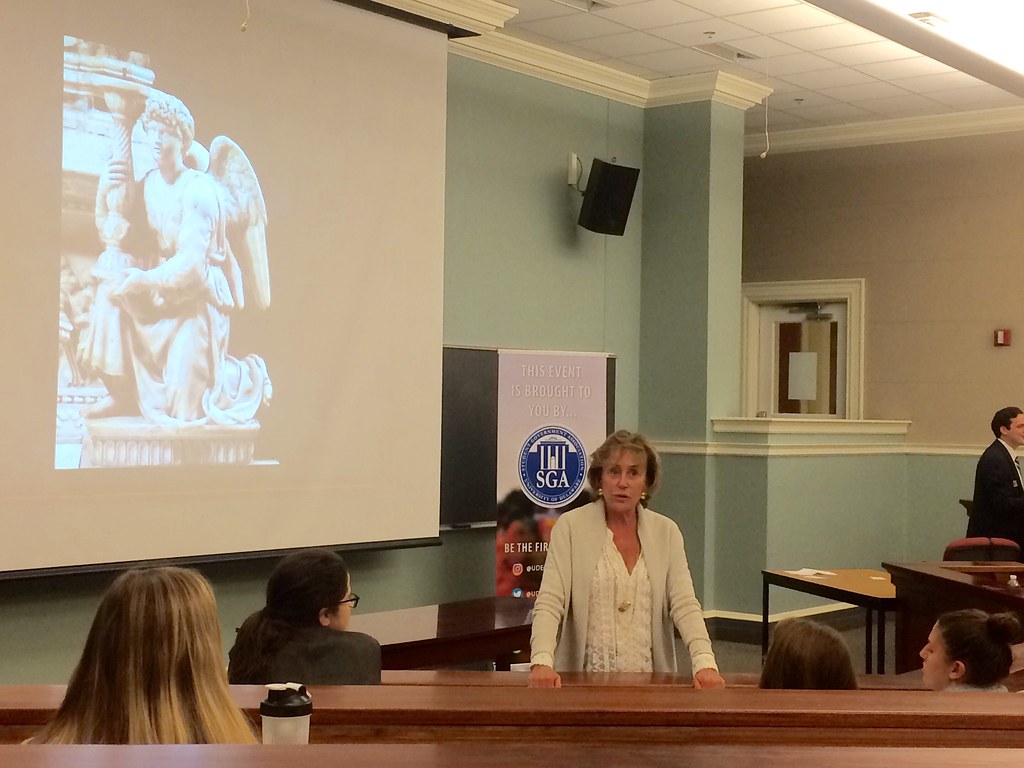 The secret to Former Vice President Joe Biden’s success? His kid-sister and fellow university alumni turned campaign manager — Valerie Biden Owens. Though she has not received the same attention as her older brother, Owens has held her own in an increasingly hostile political environment.

“All leaders are not the captains of the team,” Owens said.

At the Biden Is Back even on April 7, the former vice president mentioned his lesser known younger sister, with whom he has shared his political career with since the beginning of his journey.

On Wednesday, Owens made her own public appearance in an event hosted by the Student Government Association (SGA), to speak about her experience as a campaign manager and a woman in politics.

After some awkward fumbling with Spotify, she entered the room to the tune of “American Pie” by Don McLean. As she made her way to the pulpit, she shook hands and asked for names, as any good politician would.

Owens has made it clear that she did not see herself playing the political field.

“One in this family was enough,” she joked. “I had other things. I was a groundbreaker in what I was doing.”

Owens has made a name for herself as the first woman to run both a modern senate and presidential campaign. As a woman in politics, Owens described the discrimination, the doubts and the triumphs.

“I was one of the first wakeup calls to the democratic establishment, that maybe a woman can do this,” she said.

She did, however, acknowledge that her relationship with her brother did help in the long run.

“I had a better seat at the table, because my brother was at the head,” she said.

She has also volunteered her time with the Women’s International Campaign, dedicating to teaching women in “emerging democracies” how to organize, communicate and participate in politics.

“I probably have a different perspective than most people, because I don’t plan on going into politics,” Brittany O’Connell, a senior interpersonal communications major, said. “Her story about being a woman and all the adversity she faced and how she overcame it were really interesting to me.”

However by running all of her big brother’s campaigns, Owens has also contributed to making “Biden” a household name in Delaware and beyond.

“I think it’s an honor, and it’s a responsibility to do the right thing,” Owens said.”We have to step up to the plate.”

Owens is one of three successful campaign managers who attended the university, including David Plouffe and Steve Schmidt, who ran former President Barack Obama and Senator John McCain’s 2008 presidential campaigns, respectively. Unlike her male counterparts though, Owens graduated from the university with a degree.

After a short history lesson, Owens explained her choice of entrance music. “American Pie” was released the same year that she helped her big brother clinch an unlikely senate win, 1972.

From coffees with housewives, to handwritten notes and hand-painted signs, Owens claims that she and her brother invented the “authentic” campaign, which beat incumbent J. Caleb Boggs and rose Biden to fame.

Owens attributed this “old fashioned campaigning” to democratic party victories in Virginia during this past Tuesday’s midterm election.

Owens concluded her speech by asking members of the audience to realize their “potential to be better.”

Cathy McLaughlin, Executive Director of the Biden Institute, believes that Owens is giving students new opportunities by telling her own story.

“Having a role model like Valerie, who can say, ‘here’s something new that you maybe never thought you would do, but if you want to do it you can do it,’” McLaughlin said. “ I think students need that opportunity to see leaders and see models, and have that conversation, and be here to ask questions.”