'When Should Nations Kill?': Experts weigh in on when war is appropriate 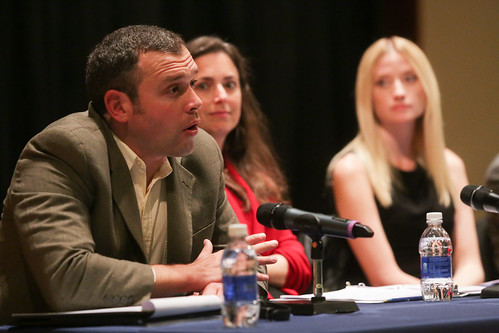 Kirk Smith/THE REVIEW
Ian Fishback was named one of TIME magazine’s 100 most influential people in the world in 2006 for taking a stand against abuse of detainees in Iraq and Afghanistan.

As politicians debate the use of military force in Syria and Iraq, experts from the field of philosophy, law and the military converged on campus to discuss when a nation should utilize military force and how that force should be exercised.

A panel discussion about the appropriate use of military force entitled “When Should Nations Kill?” drew a crowd Wednesday night at the Roselle Center for the Arts. Students, faculty and members of the Newark community attended the free event.

The presentation highlighted seven renowned experts on the subject of war ranging from philosophers, law professors and former military members.

The event was sponsored by the university’s Department of Philosophy with the support of the Class of 1955 Ethics Endowment Fund and was part of a two-day academic conference. The Ethics of War conference was held from Oct. 8-Oct. 9 and also included a film on Fallujah and a discussion in Gore open to all interested students with the “When Should Nations Kill” panelists.

The two-hour conversation consisted of four parts, including questions from the moderator, philosophy professor Alan Fox, about when and how war should be fought and questions about recent events. The program also featured a question and answer session with the audience.

Topics examined ranged from ISIS to the morality of killing Bin Laden to battlefield equality.

Varying views of the issues discussed were displayed across the panel. Law professors Kimberly Kessler Ferzan and Adil Ahmad Haque had different views on preventive war and when it should be done. Haque said preventive war always violates international law while Ferzan disagreed. She said we want some manifestation of a true culpable intention before we authorize going to war.

Another question focused on terrorism versus conventional warfare, and if it is just to go to war over terrorism.

Shaw was particularly interested in how responsive military and political officials are to the views of the public. She inquired in the question and answer portion about negative public opinion and how it affects whether or not a war is perceived as just.

“I wanted to ask the question because we do live in a nation where we elect people who we think will make the decisions we want them to,” Shaw said. “As Americans, we like to believe that everything that gets done in our country at least has the majority consent of the governed.”

Shaw said the decision to go to war is a complex one involving a great deal of factors. The panel touched on a number of these factors from pragmatic to moral to psychological issues. Many citizens do not think about what goes into a military decision, they only see the result, Shaw said.

Senior international relations major Sonnya Yoo took notes throughout the event, which she attended for extra credit for her national security policy class. She said many topics, including the use of weapons, related back to what she was learning in class.

“The best evidence we have suggests that drones are actually better at limiting what’s so called ‘collateral damage’—unintended death of civilians than alternative means,” said Bradley J. Strawser, panelist and assistant professor of philosophy at the Naval Postgraduate School. “That’s not to say that a drone is somehow a good clean precise weapon, but they seem to kill less.”

Students who attended said they found the night enlightening and learned more about the moral aspects of when a nation decides to go to war.

“War is such a massive issue, especially because of society; we’re so globalized,” Shaw said. “So I just want to know about as much as possible before I make any moral judgments on what is done.”