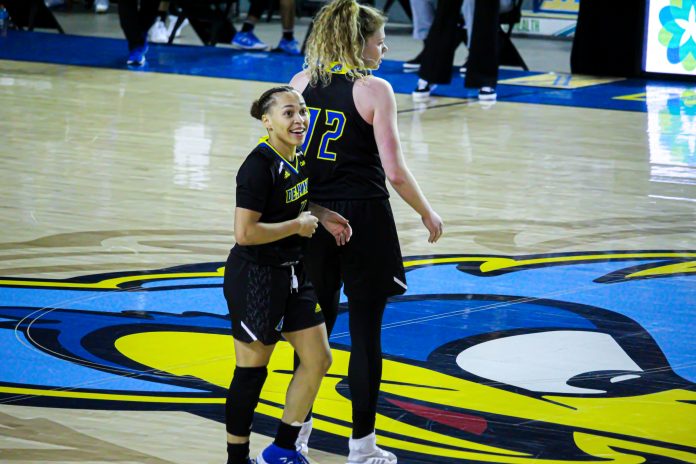 By way of Saturday’s 80-54 win, Delaware clinched the Colonial Athletic Association (CAA) Regular Season Title and the No. 1 seed in the Conference Championship. Coach Natasha Adair mentioned that while this win shows the team the importance of “trusting the process,” she is also proud of the team veterans.

“I’m proud of [senior] Lizzie Oleary, who’s been here from day one — she’s always known our culture and our program,” Adair said in a post-game press conference. “This is for [juniors] Jasmine Dickey and Paris McBride, our two first recruits.”

Saturday’s game featured a massive second half for the Blue Hens, who outscored their opponent by 21 points in the final two quarters. As a team, they shot 57.1% from the field and 80% from the three-point mark.

Delaware’s rebounding advantage did not waver all game, as they grabbed 63 rebounds compared to Towson’s 38. The Blue Hens also outscored the Tigers 23-15 in second chance points, 32-20 in points in the paint, 25-11 in bench points and 11-4 in fast break points.

Dickey put up a team-high 29 points and 18 rebounds while sinking 9 of 12 free throw attempts. Senior forward Ty Battle put up a double-double as well, with 10 points and 15 rebounds.

Additionally, Oleary tied her career-high of points with 14, and freshman guard Tyi Skinner added 13 points of her own.

The Blue Hen defense was able to limit Towson’s star guard Kionna Jeter on Saturday, as she only scored 17 points on 7 of 22 shooting from the field.

Sunday’s matchup was more of the same, as the Tigers struggled to keep up on the glass, getting outre-bounded 55-38. While the game was fairly close in the early going, the Blue Hens pulled away to grab a regular season-ending win.

Delaware took a 36-26 lead into the half, partly thanks to forcing 18 turnovers and securing 17 offensive boards. However, they did struggle in first-half shooting, going 13 of 41 from the field and 8 of 17 from the charity stripe.

In the third quarter, those shooting woes were fixed, as Delaware shot 52.1% from the field and increased their lead to 59-39.

The offensive explosion continued into the final quarter, where the Blue Hens scored 27 points on 50% shooting and 10 made free throws.

Dickey put up another monster game, with 30 points, 11 rebounds and four steals. Once again, Battle reached a double-double (her 16th of the season) thanks to 15 points and 10 rebounds.

Towson’s Jeter did improve upon her performance on Saturday, earning 24 points in the matinee. Still, the Delaware defense remained stout in all areas, forcing 25 turnovers overall (compared to 14 on the other side), including six alone from Jeter.

“Coming in, we knew that in order to win, we had to stop them on the glass,” Battle said in a post-game press conference. “[We also had] the goal to stop them in transition, which we did, and give up no open threes.”

With the regular season finished, the Blue Hens finish undefeated at home (11-0) for the first time since the 2011-12 campaign. Further, Delaware is the only of the CAA’s ten teams to complete a full 18-game conference schedule.

Meanwhile, following two tough losses, Towson (12-7, 7-5 CAA) falls to the No. 3 seed in the conference tournament behind Delaware at No. 1 and James Madison at No. 2.

By virtue of having the top seed, Delaware (19-3, 16-2 CAA) receives the sole first-round bye in the newly adjusted nine-team women’s tournament. On March 11, the Blue Hens will play the winner of the first-round game between the No. 8 and No. 9 seeds.

Despite the long break in action, there is still work to be done before the conference tournament begins.

“Offensively, it’s important that we take these two weeks, and we improve on shot selection and making open shots,” Dickey said after Sunday’s game. “We need to make sure we’re perfecting our craft [on offense] and not letting our defense drop at the same time.”

Coach Adair also points to the momentum of the team’s last three wins as something that will carry over into the tournament, where the Blue Hens will need to advance through three rounds to take home the title.

“This time of year, you want to be playing your best basketball,” Adair said. “As we’re preparing for the CAA Championship, we have to be the best team three days in a row.”

Share
Facebook
Twitter
Pinterest
WhatsApp
Previous articleThe Blue Hens Blitz Podcast: Previewing the kickoff of Delaware football ahead of the Blue Hens’ home opener against Maine
Next articleColumn: For a successful spring, Delaware will need to win the battle on the lines