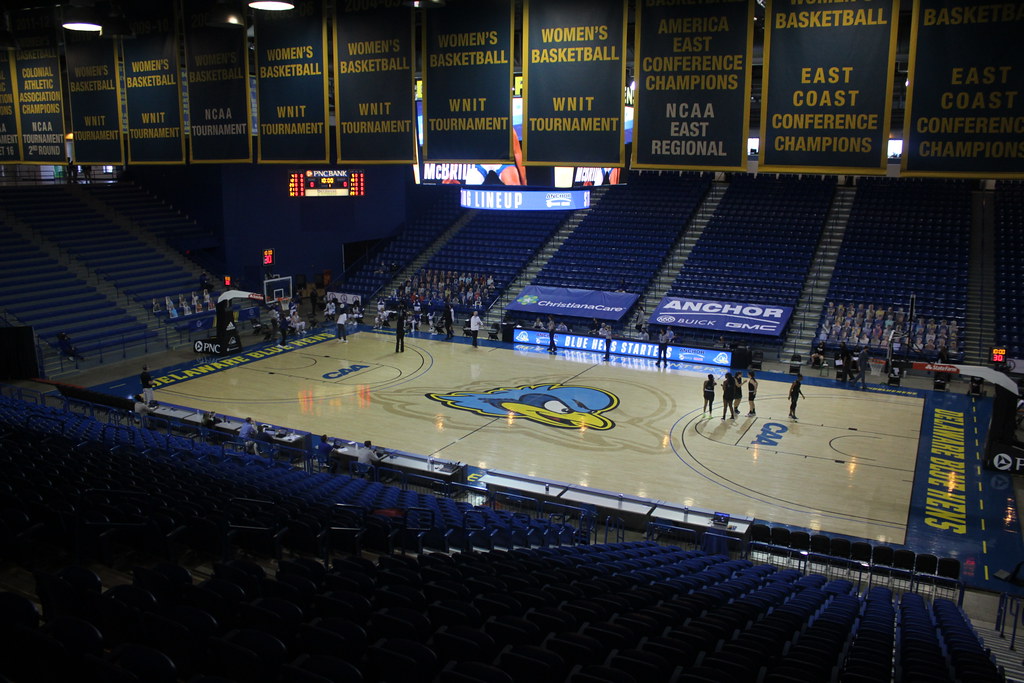 Typically a Thanksgiving Eve matchup at the Bob Carpenter Center would consist of fans filling in the stands. Concessions being sold. The pep band filling the void during a stoppage. In the COVID-19 era of college basketball, this is no longer the case.

The University of Delaware had not seen an athletic event in 260 days, prior to the women’s basketball teams first matchup with Division II opponent, Salem University.

Despite the lack of fans in the stands, the Blue Hens were able to provide energy that was apparent both on the court and from the bench.

Delaware finished the day breaking two team records with 111 points scored and 71 total rebounds in it’s 111-54 victory over Salem. The last time Delaware scored over 100 points in a game came in a 1981 victory over Lock Haven, which saw Delaware put up 104 points.

To go along with the two team records, Jasmine Dickey, Lizzie Oleary, Brynn Wade and Paris McBride all set career highs in points, assists or rebounds.

Dickey led the Blue Hens in scoring with 31 points, shooting 11-21 from the field. Oleary’s career-high 14 points, saw her go 4-5 from the field and 3-4 at the free throw line. Wade finished with 12 rebounds, leading the team in that category. McBride rounds out the list of players setting career highs, finishing with eight assists.

Dickey, a Preseason First Team All-CAA selection, accredited her teammates for her success on the court.

“I think we have that chemistry where anybody on any given day can score, so it was just cool on the first game I was able to do that,” Dickey said.

Along with Dickey and Oleary, redshirt junior Ty Battle and freshman Tyi Skinner were both in double digits in scoring for the Blue Hens. Battle, a transfer from Indiana State, finished with a double-double, scoring 16 points and pulling in 10 rebounds. Skinner scored 13 of her 15 total points in the second half.

Head Coach Natasha Adair loved what she saw from her team on the offensive end and is hopeful about her team’s future ways to score.

“I love the way that we can score inside and out; I was so proud of Lizzie’s production and Brynn’s production inside,” Adair said. “I think we’ll be able to score in just a multitude of ways.”

Even with no fans, Head Coach Natasha Adair credited her team for providing energy from the bench, which saw teammates cheering each other on from the bench throughout the game. This is something that Adair says they work on regularly at practice.

According to Adair, the team has started a tradition after practice where they “brag on a teammate” and highlight the positives of a teammate. Adair credits this to her team’s energy throughout the game.

“They’re so used to highlighting each other and bragging on each other; you could tell the energy was there today, and they really shared it,” Adair said.

While the Blue Hens started the year on a good note with a dominant win, there are aspects of the game that Adair hopes to improve on as the season progresses.

On the day the Blue Hens shot 63% from the free throw line, which is something Adair hopes to improve on, especially as Delaware gets set to take on tougher opponents within the conference. Adair also credited Salem for being able to penetrate inside and is another area she hopes to clean up.

“We’re going to have to do a better job of containing without fouling and keeping the ball out the middle,” Adair said. “What were we today, 63%, that’s too low, but what I was proud of was the 41 attempts.”

The Blue Hens were one of seven CAA women’s teams to start off its season.

Delaware will visit interstate rival Delaware State on Dec. 2, with their next home game at the Bob Carpenter Center coming on Dec. 10 against Georgetown.