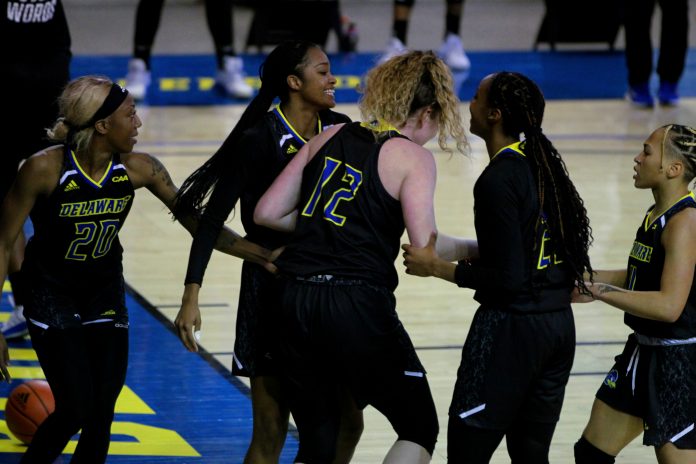 The past eleven months have been a whirlwind of emotions for sports teams across the country, and the Blue Hens women’s basketball team is no exception.

There has been excitement and disappointment, anguish and passion, patience and determination. Through the ever-changing schedules, regulations and expectations, one constant remains: team chemistry.

The team’s off-the-court chemistry and camaraderie has been unwavering during uncertain times. Perhaps their largest obstacle came last year, when the coronavirus pandemic swung into full force and led to the cancellation of the Colonial Athletic Association (CAA) Tournament.

“There were so many tears,” Coach Natasha Adair said of the sudden cancellation. “We had just started to get healthy [and] we were trending upward at the right time. We found this new life, this new energy and that was snatched away.”

Unbeknownst to seniors nationwide — including five Blue Hens — there would be no rescheduling of conference or national tournaments, and no more games left to play.

Such an unexpected and bitter end to the season could break a team’s mentality, especially with basketball activities cancelled over the next months. But the sisterhood for Adair’s group of players extends far beyond the game of basketball.

Back in June, following the killing of George Floyd and civil unrest driven by racial injustices and police brutality across America, rising junior and team leader Paris McBride led a charge with the full backing of her teammates and coaches.

She brought up an idea to write letters to Delaware mayors to enact policy change that would prevent police brutality and fight the injustices against African-Americans. Once the entire team got together, they composed a letter, and it was shown to Coach Adair and others in the Athletic Department. McBride’s vision blossomed into true change in the state of Delaware.

“These 18- to 22-year-old rock stars had all these voices and emotions inside of them,” Adair said of her team. “I was so proud of them; they came with information; they did research; they were prepared.”

“As a Black athlete, you have a platform, [and] you can use your voice and get your word out,” McBride said. “To have my teammates have my back meant a lot to me.”

Coach Adair emphasizes while none of her players have the loudest voice inside the locker room, they were all able to find their voice during this time and emerge as better people off the court.

“When they stood up for what was right, against police brutality, [and] against social injustice, strength grew inside of them,” Adair said. “Leadership grew, and you just see that translate beautifully on the court.”

Seeing those translations take place required a wait longer than normal, as the team’s first game did not come until late November. However, an impenetrable drive to grow as a team rose from the bitter taste left following last season’s abrupt ending.

For both McBride and senior transfer Ty Battle, the off-the-court sisterhood the team shared during turbulent times was critical for their on the court chemistry.

“If we have trust off the court, we can have trust on the court,” Battle echoed. “You can tell, especially from the bench energy throughout the whole game, [that] everyone has a role.

The bench energy that Battle mentioned has been a key factor to Delaware’s success this year, namely at home in the Bob Carpenter Center. With no fans, the players often find themselves having to supply excitement and spirit.

Further, the team has relied on its great depth this season, and Battle noted that no matter who is on the court, the players on the bench are always engaged and cheering. Depth and unselfishness have been two crucial components to the Blue Hens starting off 16-2 (13-1 CAA) and 9-0 on their home court.

“When we do our scout breakdown, we make sure on every film, we highlight our energy,” Adair said. “We’re going to get really excited about the energy; we get excited for our sisters.”

Coach Adair also points to a summer meeting she and her team had with longtime sportscaster Debbie Antonelli as essential to the team’s tight bond this season.

In that meeting, Antonelli emphasized “bragging on a teammate,” which is a concept that stuck with Adair and the entire team.

“Now at the end of every practice and at the end of every game — win or lose — we go around, and each player says something positive about their teammates,” Adair said. “It started off very intentional, but now it has become ingrained in our culture.”

Having solid team chemistry and locker room presence are driving forces in the team’s success, especially with the pandemic still ongoing and the end to last year fresh in the upperclassmen’s minds.

“We have to make sacrifices because we know at any point games can be cancelled [or] our season can be postponed,” McBride said. “We know it’s not just about us as individuals; it’s a bigger picture with the team.”

The unorthodox nature of college athletics during a pandemic is something easy to look down on, but the women’s team has taken great advantage of the opportunity to play basketball during such an uncertain time in the country.

To Adair, relying on one another has been a huge key to Delaware’s success. She pointed out that no matter the end result, every game ends in the team leaving the locker room together as one big family.

As the Blue Hens head into the back half of conference play, a chance for one of the best years of the past decade looms. However, Battle and McBride both mentioned that the team emphasized the importance of focusing on every game one-by-one to the incoming freshman, due to the pandemic.

“The responsibility falls on the upperclassmen to see it through for their sisters that couldn’t,” Adair said. “They are motivated to make sure they play every day and finish the game exhausted because [we] know that tomorrow is not promised.”