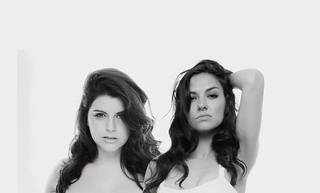 YouTube sensation and LGBTQ activist Chrissy Chambers watched the video in horror as her ex-boyfriend had sex with her nearly unconscious self. The thing that was most terrifying was that she couldn’t even remember what she was seeing.

When Chambers was 18, her ex-boyfriend secretly filmed a video of them engaging in sexual relations.

Chambers’ ex, an unidentified resident of the United Kingdom, proceeded to post the illicit material to 35 different pornography sites after she broke up with him and began dating Kam.

“I definitely feel that my being gay had something to do with it,” Chambers says to the crowd.

Chambers was not able to press charges in Atlanta, the city where the act took place, due to the fact that she was inebriated at the time of the act.

Chambers was later diagnosed with Post-Traumatic Stress Disorder (PTSD) as a result of the trauma she experienced.

“I had no idea how to help myself get through this,” Chambers says. “I suffered from night terrors and my sleep paralysis prevented me from waking up from them.”

Chambers and Kam called over a hundred lawyers until one representative took their case. Since then, they have flown to the United Kingdom to receive justice by citing a clause from the Malicious Communications Act, which states that the sending or delivering of letters or other articles for the purpose of causing distress is illegal.

“It will be finalized in a couple months. Even the BBC is doing a story,” Kam says. “We are looking forward to it coming to an end.”

The couple cope with their struggles by engaging in physical exercise and other therapeutic strategies, as well as releasing YouTube content, which includes original songs and skits. Their channel has nearly 800,000 subscribers.

“We’re not afraid of touching taboo topics,” Kam says. “We want to show very shocking content that has a message.”

Their fanbase has been supportive, as they have donated $40,000 to the couple’s crowd fund in support of their legal defense.

“I don’t fight intrusive thoughts anymore,” Chambers says. “I’ve learned how to be vulnerable. And it has changed the way we love and trust one another.”

Some in the audience learned from the couple’s story. Andrew Garda, one of the speaking engagement’s promoters, felt it opened listeners’ eyes to issues in modern relationships.

“It really brought upon awareness to a lot of social issues, especially with dating and relationships,” Garda says.

Chambers has resolved to keep fighting even if the ruling does not go in her favor within the next couple of months.

“My parents have told me ‘you don’t have to do this,’ but I want to seek justice,” Chambers says. “If I give up, then that makes it that much harder for the next person to seek justice.”

Personal Essay: COVID-19 stole my college experience, but I am taking it back