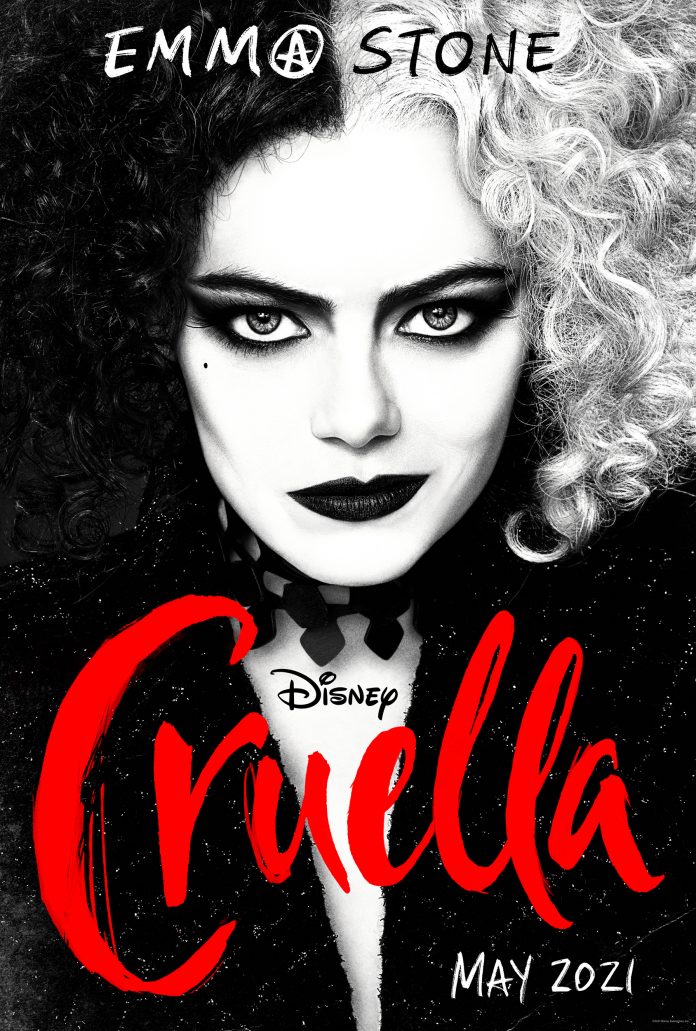 Yes, the rumors are true. Emma Stone is the villainous Cruella de Vil in the next live-action Disney film aptly titled “Cruella,” coming to theaters (or home televisions…) this May.

The first trailer for “Cruella” was released on YouTube along with a poster of Stone as protagonist Cruella de Vil.

Here’s some things you should know about the film for some excitement, because as a follower of all movies with Emma Stone, I am definitely super thrilled about it.

The film will be produced by actress Glenn Close, who starred in the 1996 version of “101 Dalmatians” film as Cruella de Vil. Close has produced two films so far, including the British film “Albert Nobbs,” which received two Academy Award  nominations in 2012, one nomination for Close herself as best actress. The production of Cruella will require a lot of Close’s familiarity with the character of Cruella, which I am so eager to see played by Stone.

Let’s talk about the trailer. If you haven’t watched it yet, I’ll give you a quick visual.

The cinematography in the trailer is very dark and gloomy, pairing well with similarly moody instrumental music in the background. Everything was red and black tinted. It reminded me of the first trailer for Disney’s “Maleficent” starring Angelina Jolie.

Stone’s first appearance in the trailer is as young Cruella, shown going to work when the camera zooms in on a bottle of whiskey in her hand as the music heightens, which gave me an uneasy feeling in my stomach.  This will be one of her darker roles, for sure.  Definitely not another Olive Penderghast or Skeeter Phelan type of role.

The feeling that I had while watching the “Cruella” trailer for the first time even reminded me of how I felt when the “Maleficent” trailer was released, super thrilled and consumed by all of the mystery and darkness that was shown throughout the clip.

Most of us have seen Stone portray lighter and more humorous roles in her first few films such as “Easy A,” “Superbad” and “Crazy, Stupid, Love.” However, her more recent roles have been a little bit deeper, starting with her role as Skeeter in “The Help,” her Academy Award winning role as Mia Dolan in “La La Land,” and her most recent as melodramatic and beguiling Abigail in “The Favourite.”

Stone’s leading role as Olive in “Easy A” remains the closest she has to holding down nearly every scene by herself. She has said in interviews that she feels like she “tried too hard” as Olive in the film and that she was “too hard on herself” being the starring role.  She was also overwhelmed having most of the film to herself, which happens to young actresses frequently at the beginning of their career. But, Stone has definitely come a long way in Hollywood, especially when she received the Academy Award for Best Actress for her lead role in “La La Land” alongside Ryan Gosling.

I think playing an iconic Disney villain role following in Glenn Close’s footsteps will be another big step for Stone’s acting career. For years upon years, Disney princesses and villains have been such a huge part of film culture because for a lot of people, Disney characters are a large part of their childhood.  The villains are always seen by themselves or with a “sidekick” in Disney films, and they always seem to be the surrounding points of the storylines, making them easily remembered. Angelina Jolie got a lot of recognition for her role as Maleficent, and it’s likely that Stone will receive that same recognition, if not more. These live action Disney villain spin-offs seem to get a lot of buzz, so I’m hoping that “Cruella” follows that pattern, despite the pandemic.

Based on what I saw in the trailer, I’m predicting that Stone’s portrayal of Cruella will be a bit of a mixture of her acting in “The Favourite” and the Netflix original series “Maniac,” both being more lurid roles for Stone.  I think we will see some of her melodramatic and emotional behavior as Abigail along with a dash of maniacal and unhinged tendencies of her character Annie, who possesses multiple-personality disorder in “Maniac.”

I’m eager to feel the sudden chills that Emma Stone will bring to the Disney franchise. It is something that not a lot of people would expect for Stone, so that makes me even more excited.  Based on the couple of other darker roles that she has portrayed in the past couple of years, I can’t wait to see her bring everything together for the villainous character of Cruella de Vil.