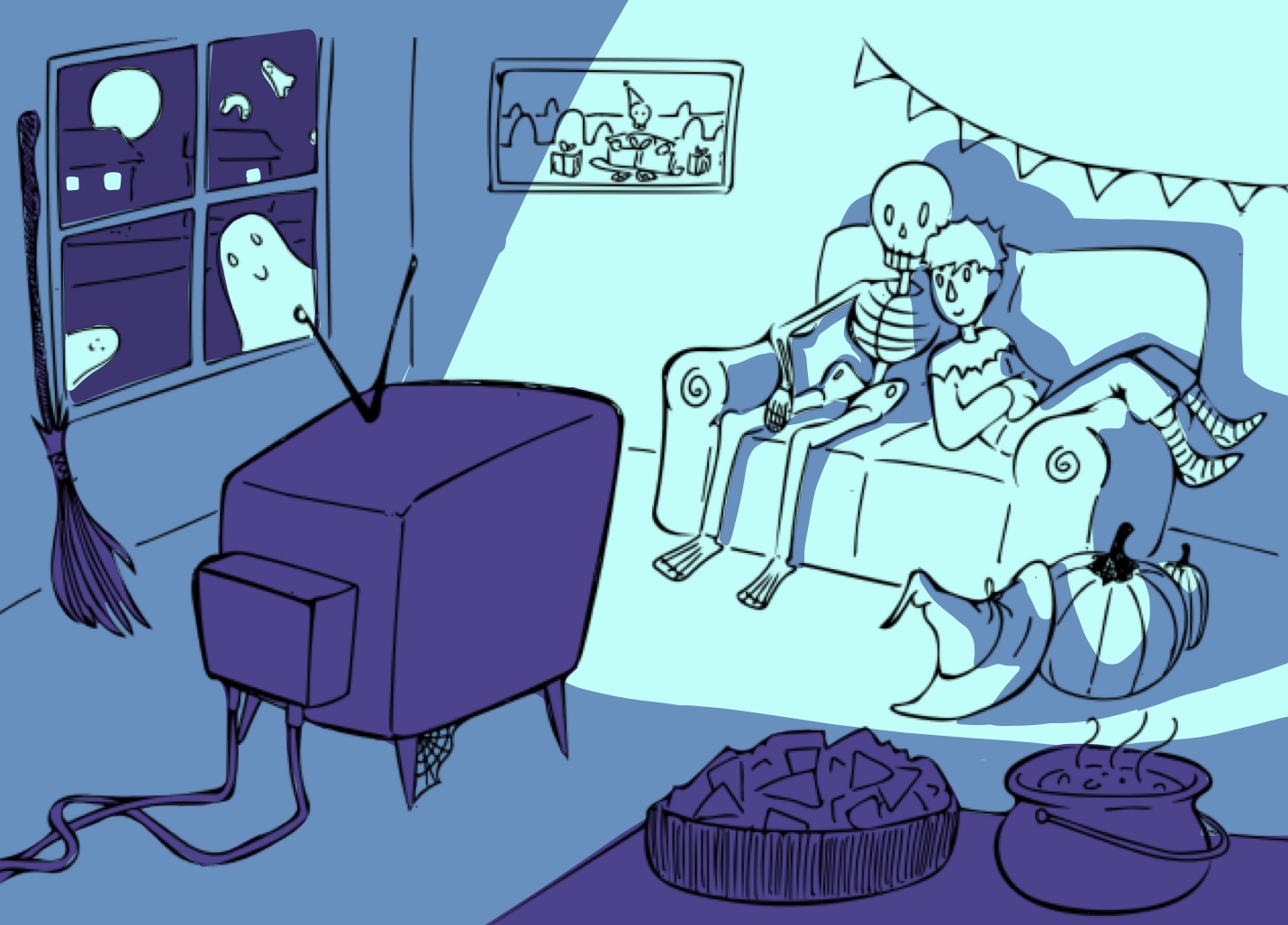 Ah, it is that glorious time of year yet again. The leaves are falling. Pumpkin spice is infiltrating just about every marketable good in some way, shape or form. Holiday decor is already filling the shelves of major retailers.

Yes, dear reader, spooky season is upon us.

As someone who spends about 75% of October playing with the electronic Halloween decor in Target, I fervently anticipate and relish this time of year. However, as someone who concurrently remains convinced that sleeping with my feet hanging off the bed is guaranteed to lead to my death by some unknown supernatural force, the extent to which I can celebrate is oftentimes compromised by the abundance of ghastly, blood-soaked horror movies that perpetuate this season.

I am positive that I am not alone, and as a favor to my fellow wimps, I have compiled a list of not-so-spooky Halloween movies to entertain every tier of cowardice, the third tier specifically compiled for those ready to expand their cinematic horizons.

After all, it’s okay to be chicken when you’re a Blue Hen.

Tier 1: I have the courage of a toddler

“The Nightmare Before Christmas”
What better way to prematurely usher in the holiday season than by indulging in a tale about a skeleton sick of his station in Halloweentown who discovers the joys of Christmas. It is a masterpiece of stop-motion animation and the only film I know of that can be watched in two disparate holiday seasons without any ensuing cognitive dissonance. Perhaps it can offer a valuable lesson about the dangers of pushing the limits of seasonal boundaries to those aforementioned retailers already setting up their holiday displays…

“Frankenweenie”
I miss those good old days when children, instead of spending all their time on TikTok, utilized science to bring their deceased pets back to life. Despite its creepy black-and-white cinematography, it’s a heartwarming story about the lengths a boy goes to to resurrect his beloved dog. Although this is a blatant reimagining of “Frankenstein,” there are a plethora of witty references to iconic horror flicks — but being your scaredy self, they will most likely go unnoticed.

“Young Frankenstein”
Yet another black-and-white spoof on “Frankenstein,” there is absolutely no scare factor in this Mel Brooks classic that centers on a descendent of the original Dr. Frankenstein picking up where gramps left off. Packed with blink-and-you’ll-miss-it quips and outrageous humor, you may find yourself inclined to spend your Halloween “Puttin’ on the Ritz.” If not, it’s truly funny enough to enjoy any time of the year.

“Labyrinth”
This cult-classic may be scary for children under age 8 (puppets aren’t for everyone), but since it’s directed by Jim Henson, the mastermind behind the Muppets, there’s little to fear. The plot follows a teenager trying to rescue her baby brother from a singing goblin king (yes, you read that correctly), and features David Bowie in all his glory. I predict the only disconcertment you may experience will come from Bowie’s infamously tight pants.

“Ghostbusters” (2016)
I do not comprehend the blatant hate around this film. Indeed, it feels more like an elongated, well-budgeted SNL skit, but rather than copying the premises of the original films, it offers a newer, CGI-laden take complete with an all-female set of Ghostbusters. It’s good fun for fans of its predecessors, and if candy isn’t enough of a treat for you, perhaps Chris Hemsworth will be!

“Corpse Bride”
A plot only Tim Burton could get behind: a Victorian lad somehow manages to inadvertently marry a corpse. Although the concept sounds relatively horrific, the musical nature of the film, as well as its overarching theme of unconditional acceptance, makes it a gloomy but charming movie. ’Til death to us part is for chumps.

“Goosebumps”
This is the stuff of nightmares for grade schoolers: the new kid in town discovers that his neighbor is R.L. Stine, whose manuscripts, when opened, unleash the books’ freaky characters. If the books (or TV show) terrified you as a child, now’s a good time as any to purge those demons. What better way to do it than through an amalgamation of every disturbing “Goosebumps” monster being thwarted by teenagers complete with Jack Black as a cranky novelist.

“Addams Family” (1991)
And you thought your family was weird. With the arrival of a long-lost relative, the Addams must decide whether to accept the newcomer into their eerie home, or to assume more selfish intentions on the part of the potential swindler. The film is more morbid than scary, so if sunshine and rainbows are your thing, steer clear. However, if thunderstorms and gloom laced with dark humor are your cup of tea, welcome to the family.

Tier 2: I love creepy vibes (But I sleep with a nightlight)

“Ghostbusters”
You may have come across recent buzz around the film as a result of a random attack on Rick Moranis, one of the film’s principal (and funniest) characters. Support our man Rick by giving it a watch! A band of university professors and scientists unite to rid New York City of ghosts to a catchy theme that’ll stay stuck in your head till finals — if only we could convince our professors to pursue a similar operation in Newark. Who you gonna call? You tell me.

“Ghostbusters II”
Love the first, want to give even more encouragement to Moranis or need even more substantial evidence to convince faculty to band together against the paranormal? Look no further than this sequel. The Ghostbusters, dealing with a decrease in demand, turn their sights to fresh threats posed by a possessed painting. Indeed, it doesn’t beat its predecessor (then again, sequels never do), but it’s still entertaining, pink slime and all.

“Beetlejuice”
HGTV fanatics rejoice: this flick centers on a recently deceased couple employing the assistance of a crass demon in order to stop a madcap family from completely refurbishing their beloved former home. Its freakiness isn’t for the faint-hearted, and the gobs of dark humor regarding death and the afterlife may justifiably render some uncomfortable. However, if you’re willing, the Ghost With the Most may just make your Halloween.

“Edward Scissorhands”
The many plot elements involving haircuts have never hit home so hard as now, especially since most at-home cuts I’ve seen are more terrifying than this movie. It’s a touching tale about a man with (you guessed it) scissors for hands, who is discovered by a kindly door-to-door saleslady and subsequently introduced to society. I firmly believe this film to be Tim Burton at his finest, as well as a story that every outcast can identify with. You will not scream, but you may cry. Side note: this is the final film of horror icon Vincent Price (AKA the spooky narrator voice in Michael Jackson’s “Thriller”).

“Hocus Pocus”
If you have cable, I am willing to bet that you have seen this film already, possibly more than once. Why not watch it again? It’s pretty dark for a Disney movie, as the plot centers on three resurrected witches intent on sucking the life out of children, but it’s still just that— a Disney movie. Despite the dark premise, it features a talking cat and a Bette Midler song-and-dance number.

“Rear Window”
Unless you’re a film connoisseur, you probably aren’t familiar with this Hitchcock, and I won’t hold it against you. Its story is probably the most frightening for us at The Review: a news photographer recovering from an injury passes the time by watching his neighbors through the lens of his camera and one night bears witness to what he believes to be a murder. It features some of the most ingenious camera work ever seen and offers a convenient justification if spying on your neighbors is your new quarantine hobby.

Tier 3: Fine, give me scary but make it intellectual

“What We Do in the Shadows”
If you enjoy that weird area between horror and comedy, you will like this film. If you enjoy documentaries, you will love this film. This mockumentary follows the day-to-day — er, night-to-night — antics of vampire flatmates, and is therefore ideal for a stay-at-home Halloween evening. The blood is relatively profuse (which means the extremely sensitive should steer clear), but the humor is drier than the crunch of autumn leaves, helping to cancel out any unease one may feel.

“Poltergeist”
A great film for budding real estate agents and contractors — as a family pursues home renovations, they realize that not only do they have enough space for an in-ground pool, but for hundreds of ghosts as well. Although there are a few instances of horror, the pure 80’s-ness of them, as well as the humorous moments that always seem to follow, make them pretty manageable. You may, however, avoid your television for a while, so you can thank me for any resulting increased productivity.

“Jaws”
If the musical theme of this movie didn’t start ominously playing in your head upon reading the title, come out from that rock you’ve been living under and partake in this thriller about an oversized shark that turns a small island community into its personal snack bar. Come summer, I will likely no longer be able to swim in the deep end, but, with all due respect to the film, I’ve seen costumes at Party City that look more realistic than the giant mechanical shark. May it inspire you to chomp on your Halloween candy with gusto.

“Rosemary’s Baby”
I’m not saying this movie isn’t scary; it’s just more unsettling than anything, and psychological horror at its finest. A woman’s anticipation of the birth of her first baby gradually becomes overshadowed by a series of strange occurrences that make her question whether someone is after her and her child — or whether the child’s birth is even something to be excited about. There always seems to be something lurking beneath the surface in just about every scene, and although it is indescribably unnerving, it’s also incredibly engrossing. Let’s just say it’ll stay with you beyond October 31st.

“The Silence of the Lambs”
You know him; you love him; you would never accept a dinner invitation from him: the one and only Hannibal Lecter. One of the most disturbing films out there, it follows a budding FBI agent as she attempts to track down a serial killer with the help of a cannibal. Yes, I will admit I closed my eyes a few times, so I cannot tell you the frightening scenes to be on the lookout for. But I have never experienced such an adrenaline rush as I did during the final confrontation involving a very, very dark basement — the scariest thing in existence. Enjoy it with some fava beans and a nice chianti.