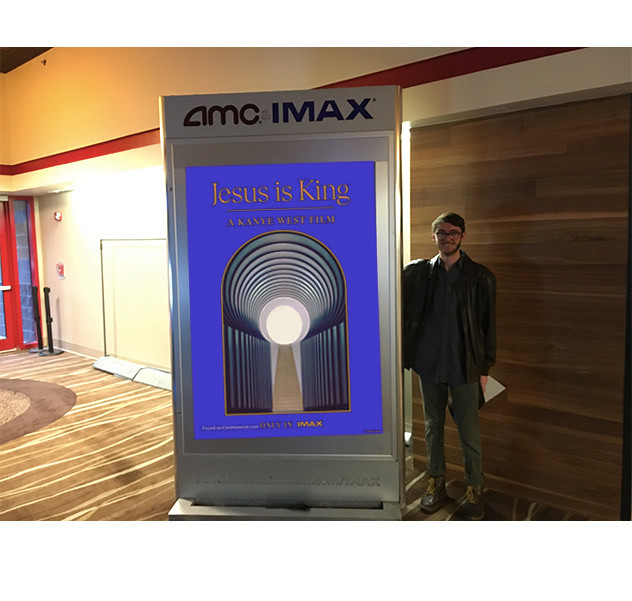 Within American pop culture, it may not be a stretch to say that Kanye West has the name visibility of Jesus Christ. West even titled his 2013 album “Yeezus” and has made countless comparisons between himself and God.

The confusing part of this fascination with religion is that West has never been one to be known for his moral high ground. From raunchy lyrics on tracks like “Father Stretch My Hands Pt. 1” to his insistence that slavery was a choice made by black people in America, he is no stranger to being criticized for the things he says. And who could forget the infamous “Imma let you finish …” incident at the 2009 MTV awards, when West got on stage with a young Taylor Swift to dispute her victory in the “Best Female Video” category.

After all, it really is only the things he says that cause audiences to get flustered. West rarely acts in malice, and more often than not, he does positive things for the communities around him, as well as supports other musicians vigorously. All of his life, the controversy, the personal struggle, the accolades and the triumph has culminated in this 11 track, 27 minute gospel-rap cyclone entitled “Jesus is King” and the accompanying film of the same name.

West is not a new Christian. Themes of religion were what put him on the map after all, with his single “Jesus Walks.” However, “Jesus is King” is different. There is less rap on this record than any of his albums since his 2008 release “808s and Heartbreaks,” taking a new creative direction completely as fans have come to expect with each album release.

West stuck with the gospel theme that he proclaimed would appear on this album. At its core, the record is still a hip-hop record but one deeply rooted in Christianity. There is no cursing, and no references to drugs or sex on the entire record: a first for West.

Instead, he takes the time on this album to reflect on his relationship with God and God’s relationship with him. Much of West’s faith seems conditional on what God gives him in return, however. The sketches of religion on “Jesus is King” feel lukewarm at some points, and at extremely passionate at others. On the song “Follow God,” West invites the listener into his mind and the different reasons he feels connections to God in this world.

On other tracks, West gets straight-up corny, using Christianity as a hollow kitsch topic. “Closed on Sunday” sounds like a Psalm over a Travis Scott instrumental with pop culture references lazily thrown into the mix.

It’s somewhat unbelievable that the lyrics, “Closed on Sunday, you my Chic-Fil-A” and “I pray to God that He’ll strengthen my hand/ They will think twice steppin’ onto my land” are on the same track. The first being terrible (but quick content for memes), the second being terrific. This is about par for the course for “Jesus is King.”

The production, like any West album, is the highlight. Each instrumental is better than the next, with the exception of “On God.” West’s knack for matching his lyrics with the feel of the track continues with excellence on his newest album.

The climax of the album comes in right at the end. The collaboration between West, rap group Clipse, and saxophonist Kenny G, entitled “Use This Gospel,” is haunting and beautiful at the same time. The instrumental drills itself into your head from the start, accompanied by a dark gospel melody blended with synthesizers. The lyrics are beautiful, the track is amazing and to cap it off, Kenny G does a good job on the outro with a smooth sax solo.

West consistently builds up steam just to stop and let the instrumental or gospel choruses take over, never really taking the spotlight for himself the entire album. The contrast between corny, positive aphorisms and deep self-reflection is stark when comparing the quality of the tracks to each other.

The album experience of “Jesus is King” is one thing, but the film takes it to another confounding place entirely. Traveling to the theater to witness the accompanying movie in overwhelming imax knowing nothing about it other than having the album name attached was certainly a gamble. At a brisk 38 minutes, it certainly begged the question of what getting one’s money’s worth actually meant, especially for 75% of the hype beast audience who came in twenty minutes late.

The film features no real dialogue and chronicles performances of the Sunday Service choir doing songs from the album and other devotional numbers. Between each song was a quotation from the Bible on a black screen and occasional nature footage. The ear-splitting volume added to the power of the collective voice choral format, even allowing one to distinguish between each singer in certain moments.

Shot in James Turrell’s art installation within the Roden Crater, located in the Painted Desert of Arizona, the scenery certainly warrants the high definition footage. Low angle shots focusing on the leader’s out-of-body, reactionary movements while directing with the blindingly gorgeous blue sky above made for one of the most breathtaking sequences in the film.

The best moment, however, came near the end when the choir disappeared for the night and West, accompanied by a pianist, organist and vocalist do a stunning rendition of the “808 and Heartbreaks” song “Street Lights” filled with pure emotion. Interestingly enough, this is one of the only moments in either the film or movie that West’s efforts feel truly authentic and devotional not just for the sake of being devotional.

Between the film and the album, “Jesus is King” is a commendable artistic venture for disregarding most everything that came previously, but it comes off as half-hearted and gimmicky in moments interspersed with limited powerful moments of religious proclamation. The film especially feels self- indulgent and not very substantive, merely situating itself within the media spectacle that Kanye’s born-again antics with this album have caused.

Audiences can only question if this sole emphasis on Christianity will keep up and what new thing Kanye will inevitably be up to with his next album.