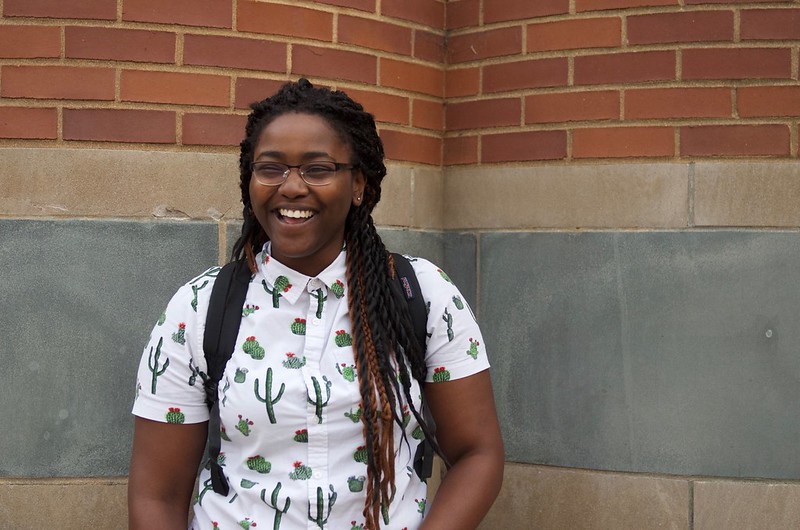 Senior exercise science major Ayana Banks is the president of the exercise science club and the physical therapy club. She is a tour guide, conducts research on STAR Campus and was a resident assistant her junior year. But she still doesn’t fit in.

Banks is black and gay and has yet to find a place on campus where she can truly be herself.
“I didn’t feel excluded in any way, but I also didn’t really feel included either in all aspects of who I am,” Banks said. “I always felt with any group that I hung out with there was always something about me that I couldn’t fully show.”

Coming to the university from Philadelphia, Pa., which Banks describes as “cutthroat,” was a culture shock for her. She said the university’s campus looks like what she’d see on television and was very different from what she was used to.

Her middle school was 99 percent black and her high school was extremely diverse, Banks said, so she was used to being exposed to different types of people and cultures. Until she came to the university, the majority of her friends were always black.

More recently, Banks has used social media to speak out and bring awareness of race issues at the university while sharing her personal experiences.

When she moved off-campus, she bought her own Wi-Fi and named it “racism is alive.” She said she chose that name because she thought it was relevant to issues on campus and that it would be easier to remember than the random numbers that come with the system.

She also started educating herself on her black culture and focusing on that aspect of her identity. She took a course called “Race in Society,” which she said was “extremely eye-opening.” She said she enjoyed the course so much that she would post on Facebook about what she was learning. The responses she received on those posts were some of her first experiences with racism.

“A white heterosexual male told me, ‘Well instead of making Facebook statuses why don’t you change it?’” she said. “It’s like, what? I’m a gay black female in college. The president can barely change anything, what am I supposed to do?”

Banks also said people would comment telling her if she didn’t like America she should leave. She said these comments were frustrating to her, especially coming from people who enjoy privileges that she would never be able to have.

“Me being gay and a woman and black, there’s not really anywhere I can go that would be inclusive or a better place to live,” she said. “So they didn’t check their privilege in terms of saying those types of things because I can’t, really.”

She also didn’t come out as being gay until college, so during her freshman and sophomore years she focused on identifying that aspect of herself. While researching where to go for college, she went on a website that ranks colleges based on how accepting they are of the LGBT community and found that the university had one of the best ratings.

She got involved with Haven freshman year, but found she didn’t fit in with them. She said part of not being able to fit in with other people is because of her background of growing up in Philadelphia.

“I think it’s important for everyone to know that just because someone’s gay and black doesn’t mean that they’ll fit in with another gay and black person,” Banks said.

She said even talking with other black people on campus, their cultures can still be different from growing up in different environments.

Banks credits her girlfriend, who is white, for acknowledging she can’t relate to Banks, but is still willing to learn about what she’s going through and educate herself. Banks said it’s refreshing to be able to be with someone who has taken several race and gender-related courses and cares deeply about the issues. She said she hopes the university will require every student to take courses that focus on issues that are directly related to what she has gone through.

“It’s important to actually explicitly have certain classes that everyone has to take because I think education is very important,” Banks said, referring to race-related courses.

Banks said even personally, she learned a great deal that she didn’t know before from the class.
Making course requirements more specific is an important step for Banks in terms of students being more accepting and open-minded, but she said she never found a place that she fully belonged to at the university.

“What I found a lot when I got here was that I had to pick or choose to be gay or to be black,” she said. “There’s no place for gay black students.”