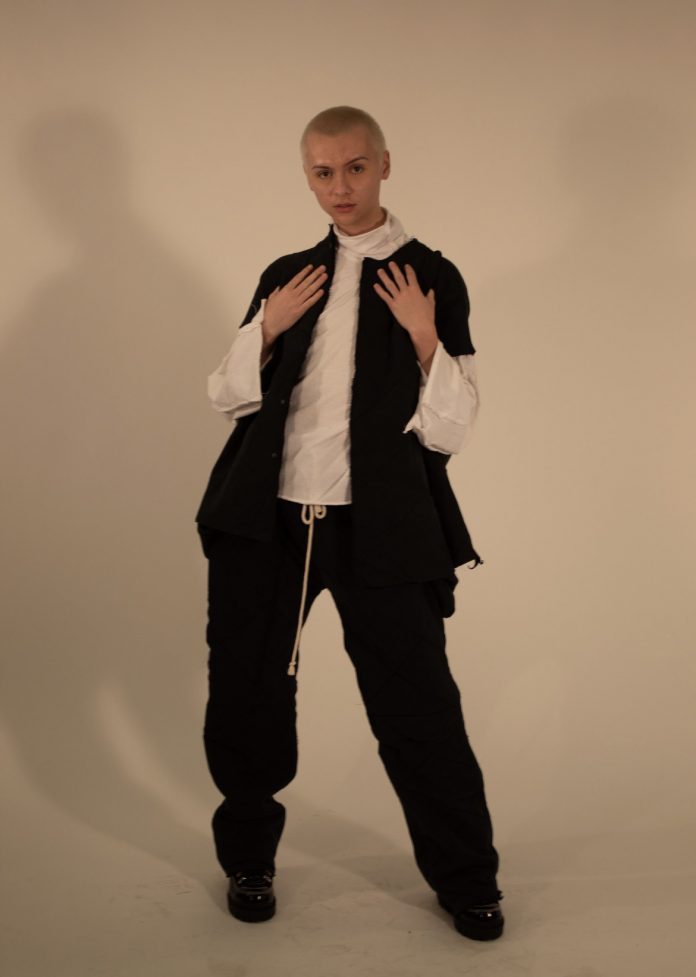 Graduating senior Bari White was inspired by his father’s work as a hardscaler and a landscaper to pursue design. When he enrolled as a freshman at the university, he followed his father’s footsteps toward architectural design and chose to study engineering.

White also wanted to connect this aspect of design he grew up knowing, with his interest in fashion designers. After a battle of deciding which learning path to take, White took a sewing class and found his passion for fashion.

On April 30, the Synergy Fashion Group presented their annual spring fashion show to commemorate the hard work, creativity and sophistication of apparel design majors. “ODYSSEY” received four awards at the Synergy Fashion Show: “Most Innovative Collection,” “Best Craftsmanship,” “Most Marketable,” and “Best in the Show.” White’s collection was the most awarded in the fashion show.

This collection contains five looks that represent the monumental moments at the university that have made White the designer he is today. Each of these looks were of little cost to White because of his mission to stay sustainable throughout the clothing-making process.

Look one, entitled “Bloom,” is characterized by monochromatic red clothing and represents White’s freshman year, where he would find his interest in clothing and design and further distinguish himself.

“Like a rose that grew from concrete, it was like I was making my way through,” White said. “It wasn’t an easy process, but I began to start getting on that path to who I am now.”

Look two was given the name “Earth,” and is characterized by monochromatic green clothing. This line included a sweater and tech pants, and represents the different change of the seasons. This look represents the ups and downs of White’s journey, which he compared to the change of the seasons. White detailed that he has been able to sit back, reflect and enjoy his journey.

Look three is a jacket with various pockets on the outside. This look is entitled “Exploration,” and symbolizes White’s junior year where he would explore the different niches of fashion. At this point in his life, White had all the confidence in his sewing and pattern-making skills; all that was left for him was to find that niche – menswear.

Around the spring of his junior year, White started to mature into the designer he had seen himself becoming. Because he had the ability to express his creativity effortlessly, he named his fourth look “Vision.” This look symbolizes both his maturation and voice as a designer.

“The silhouette of the actual outfit resembles a microphone, if you look at it closely,” White said. “That is because I had something to say.”

Look five, as White explained, tackles the concept of sustainability, a concept that was drilled in his mind through all of his apparel design classes. He named this look “Transformation” because he transformed nine hoodies into a pair of pants, a vest, and, to keep his theme of a journey, a bag.

“I even went as far as making these accessories with the idea of someone on their journey,” White said. “Because again, that goes back to me. I’ve been on a journey for about five years here.”

White emphasized that the fashion industry is a rewarding field; as long as there is motivation towards a future goal, it is easy to apply what you learn to your visions. Throughout his years at the university, White applied any information he learned to his future goals.

“UD’s fashion program gave me the tools, but I had to have the drive,” White said.

White plans to take his talents to New York City after graduation and display his work in a museum gallery. His brand, which he is in the process of trademarking, values connection and collaboration.

“As an artist, I really believe that through collaboration and conversations, we can come up with different ideas and be inspired by what is happening in our world,” White said. “And, to tap into new ideas beyond what we see, because I have ideas, but other people do too.”