Boots go up at “Cowboy Up” 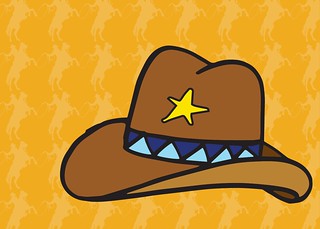 SOPHIA MOORE/THE REVIEW
Time to grab your favorite cowboy hat and wish you were at this wild event!

Three miles north of the Dover Air Force Base stands a brick building with boards on the windows and a full parking lot come Friday night. The sign above the door reads “Cowboy Up” and the dress code calls for southern country style: boots and hats.

I stepped inside this dimly-lit setting to the sound of Tim McGraw blaring through the speakers, and a line that reached the door as locals waited to pay the $7 cover charge required when a live band is performing.

In the center of the large space sits an oversized wooden dance floor, surrounded by barstools and flanked on either side by a u-shaped bar. A pool table hides behind the bar to the far right, along with stools and tables for folks who wish to sit and watch the goings-on.

After reaching the front of the line I was promptly scanned down with a metal detector similar to the security protocol at LAX, a procedure the doorman says “keeps things safe.”

Smiling coyly, he adds, “You don’t need weapons to have a good time.”

The bars were overflowing with men watching sports games and gulping down pony neck beers while the women next to them patiently waited for a song they felt they could dance to. When it came, they swarmed to the dance floor like bees to rhythmic honey.

Line dancing was the dance style of choice, and while the local band Mason Dixon took the stage to play covers of country tunes, girls and a few boys took the floor in their cowboy boots.

Hill is a regular at Cowboy Up who could sense my fascination with the dance on the wooden floor.

“There’s no other bar like this in Dover, mostly because of this stuff,” Hill says. “The dancing is the best part of coming here.”

Hill, a member of the support staff for the local Fifer Middle School has been coming to the bar for nearly two years. He cited weekends as the best days for “cutting a rug and enjoying good music.”

Tuesday and Thursday nights at Cowboy Up are reserved for free line dancing lessons beginning at 7:30 p.m., while Wednesdays are spent with Kyle Dixon, who hosts Trivia Night from 7 to 9 p.m.

However, Fridays and Saturdays are when the place fills up to maximum capacity. Camouflage and flannel shirts matched with worn boots and cowboy hats swarm the building, as people look for a drink and a place to perch before deciding to dance.

“I don’t do the tight jeans and belt buckle look, but I’m welcome here anyhow,” Moore says.
His loose-fitting pants and sweatshirt ensemble made him a needle in a haystack of other “cowboys,” but he didn’t seem to mind.

“I don’t come here to fit in,” Moore says. “I like the drink specials and the atmosphere.”

That atmosphere would be defined as laid back and very country—even the bathrooms are labeled “cowboys” and “cowgirls” for their respective genders. The bartenders are very attentive, with bottles and glasses constantly flowing, and the dance floor is never without the clacking sound of boots.

After encouragement from my newly-acquired friends, I proceeded to the floor to pick up on the two-step that one of the women was teaching, her sun dress swaying along to her movements. Like Moore, I wasn’t dressed for the part, but within just a few minutes I was boot scootin’ and boogyin’ along the wooden planks.

The two-step is as simple as it is cleverly named—it literally only consists of two steps, but it’s a place to start.

When asked of their line-dancing experience, both Hill and Moore laugh.

“Only with beer support,” Hill says. “But watching is just as fun. If I do have a little liquid courage I’ll man up and do it…or cowboy up.”