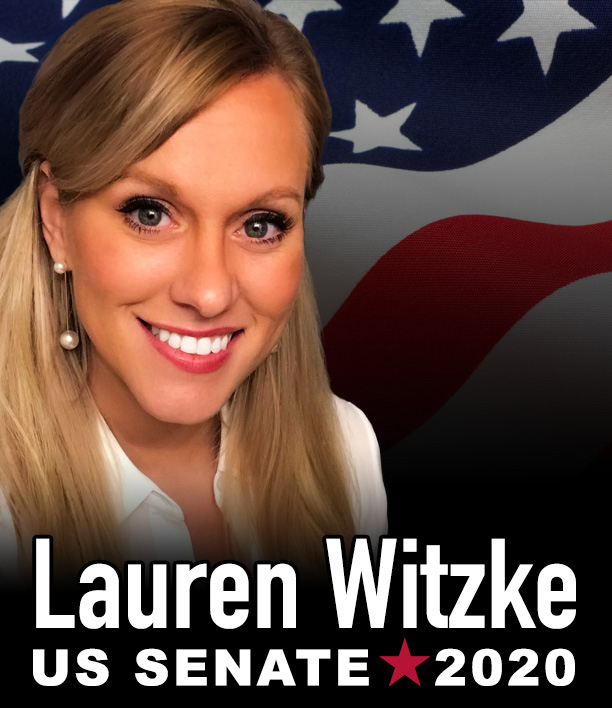 Courtesy of Lauren Witzke/THE REVIEW
A former drug runner for Mexican cartels who battled her own opioid addiction before ultimately overcoming it through a faith-based program, Lauren Witzke’s platform is inspired by her life experience.

Editor’s Note: The Review has reached out to Lauren Witzke for U.S. Senate for comment on this article.

On Sept. 18, three days after being voted the Republican nominee and within hours after Supreme Court Justice Ruth Bader Ginsburg’s death, a post was made on U.S. Senate candidate Lauren Witzke’s campaign Facebook page that claimed Ginsburg had an obsession with abortion and included a meme of three Black children dancing with the caption, “Black babies when Ruth Vader Ginsburg dies.”

The backlash was immediate, with Witzke’s campaign citing reactions as strong as threats and attempts to dox Witzke and her family. In response, the campaign’s account initially deleted the photo and retained the message but ultimately deleted the entire post. Following the incident, Republican Delaware Senator representing District seven, Anthony Delcollo called on Witzke to suspend her campaign.

“This confirms what I have already come to believe; the candidate in question is unfit to lead,” Delcollo wrote in a Facebook post. “I call upon candidate Witzke to suspend her campaign immediately. I also ask that the Delaware Republican Party revoke their support for this candidate. Delaware deserves better.”

This was neither the first instance of controversy to emerge from Witzke’s campaign, nor would it be the last.

From the start, Witzke’s campaign has been an unconventional one. A former drug runner for Mexican cartels who battled her own opioid addiction before ultimately overcoming it through a faith-based program, Witzke’s platform is inspired by her life experience.

Namely, she wants to establish a 10-year moratorium on immigration, a “one-in, one-out” policy that would more closely control the number of new United States residents gaining citizenship from outside countries. Other aspects of her “America First” platform include re-diverting welfare funding into an incentive program to get married and have children and a constitutional amendment to ban abortion.

Witzke is also an outspoken supporter of the Second Amendment, and has expressed opposition to most gun control legislation, a view that was called into question after a hostile encounter between attendees at one of her rallies and a group of counter-protesters.

On Sept. 24, an attendee at a Witzke rally outside the Delaware Republican Party Headquarters pulled a gun on a group of people protesting the GOP U.S. Senate candidate. Witzke quickly denounced the act on Facebook, and the man was later indicted on two felony charges.

“Firearms should only ever be used to defend life and property,” Witzke wrote. “I denounce this behavior completely, and will support law enforcement as they work to resolve the situation.”

Witzke was not so quick to denounce the right-wing group “Proud Boys,” labeled by the Southern Poverty Law Center as a hate group, who also made appearances at her rallies carrying firearms. The day after President Trump did not officially condemn them at the first 2020 presidential debate, Witzke took to Twitter to defend and thank the group for providing her with free security.

The Proud Boys showed up to one of my rallies to provide free security for me when #BLM and ANTIFA were protesting my candidacy.

I am grateful to them for volunteering their time to keep myself and my supporters safe!

The Delaware Republican Party continues to back Lauren Witzke as their candidate. She will face incumbent Democrat Senator Chris Coons in the upcoming general election on Nov. 3.