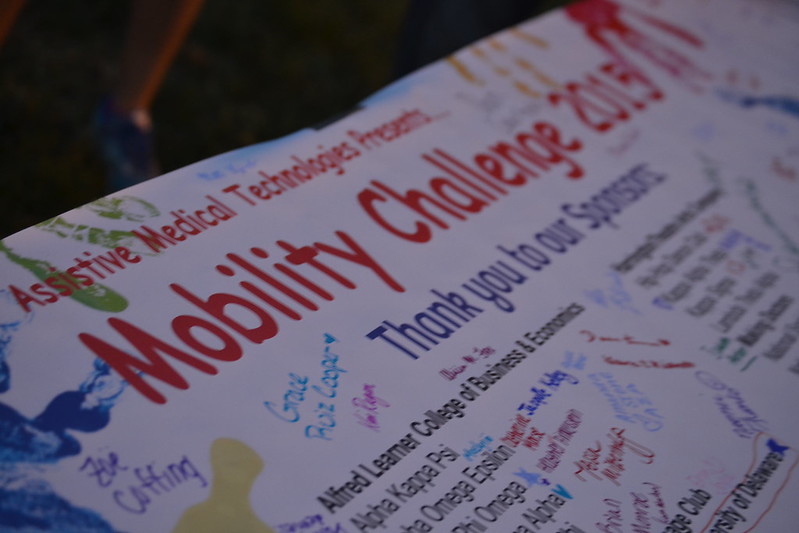 English professor Stephanie Kerschbaum was stunned by this October’s Mobility Challenge, as participation nearly doubled since last year. Still, as a deaf woman, she said people must remember they do not understand what living with a disability is like, just from one day.

Kerschbaum said she appreciated the hard work students put into the event and the energy behind it. She was not aware how big the event would be until after the fact, however, she said.

GoBabyGo!, a registered student organization on campus, hosted the challenge to promote awareness for people with disabilities on Oct. 27, and reported over 800 participants. However, members and faculty of the Office of Disability Support Services said they were unsatisfied with the structure of the events.

Kerschbaum, who also teaches classes in the disability studies minor, said she could not believe how large the event was. She said she is excited about how people are starting to recognize disabilities, but does not want the conversation to happen without the involvement of people with disabilities.

She said she believes the energy for an event like this is great, but said it is not okay to try on a disability for a day because this still does not allow people to understand other’s experiences. She wants people to develop a comfort speaking to those with disabilities about what they believe needs to be improved in society, especially surrounding issues of accessibility.

“In my experience, people will temporarily have an issue such as an ear infection and can’t hear for a few days, then they’ll come to me and say, ‘Oh my gosh, I have so much sympathy for you I can’t even imagine how you do this,’” she said. “And they don’t really know because they haven’t dealt with it their whole life.”

Anne Jannarone, the university’s director of disability services, was unaware of the event until after it happened. She tries to get students who are interested in organizing such events connected with the right people and feels the Mobility Challenge missed the mark.

“Disabilities seems to be the one underrepresented population that everyone thinks is okay to imitate,” Jannarone said. “You wouldn’t see someone simulate being gay for a day or being African American for a day, yet we do it with disabilities and think it’s okay.”

Cole Galloway, the faculty advisor to the GoBabyGo!, said the Mobility Challenge is a celebration of the joys of movement and mobility. He said he is proud of the number of people that participated, and said the event was a great celebration of great student organization.

Vinayak Rajendran, the co-organizer of the event and president of the Assistive Medical Technologies club, said he came up with the idea of the event over the summer of 2014. That fall, he helped host the first Mobility Challenge, which had around 400 participants and even got him recognized at other schools around the country, he said.

Rajendran and his team said they knew even before the event that it was going to be controversial.

“There are two different philosophies of teaching about disabilities,” Rajendran said.

Rajendran and his team chose simulation as the main tactic because they believe that people do not want to listen until they experience and understand someone else’s experience. He said he wanted to motivate people on campus to start advocating and discussing the real issues.

“For any insult we generated, we sincerely apologize,” he said.

Since the event, Rajendran and his team have spoken to the faculty and they now will begin monthly meetings about how to improve the next Mobility Challenge. They are also trying to find ways to educate students on campus about disabilities.