Do women on campus feel safe? 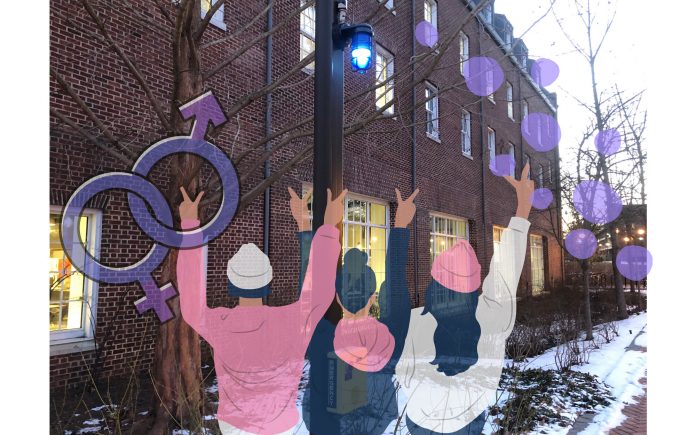 On the night of Saturday, Nov. 20, two men were charged with alleged attempted kidnapping of a university student after they tried to force her out of her off-campus residence. One of the men was released on unsecured bond. This incident came at a time when students at the university were dealing with the aftermath surrounding the domestic assault charge against Brendan Freyre.

Recently, female students on campus are beginning to vocalize their concerns and experiences regarding their safety on campus and what they personally do to protect themselves and others around them. The discourse about these attacks on campus has opened the eyes of students and faculty to the dangers and warning signs of gender-based violence.

Angela Hattery, co-director of the Center for the Study and Prevention of Gender-Based Violence and professor of gender studies at the university, painted a grim picture regarding the current state of gender-based violence.

“Rates of gender-based violence on college campuses in particular just haven’t really changed,” Hattery said. “Despite all of the effort and attention, the chances for a student now to experience gender-based violence, especially sexual violence, is just as high as it was when I went to college 30 years ago.”

Although the recent discourse on campus regarding gender-based violence has provided female students with a hint of optimism for the future, students remain disappointed by the university’s responses.

“I was impressed by the community for coming together to help fight domestic violence but I was also disappointed in the school’s actions,” sophomore instrumental music education major Anna Flynn said. “Most of all I think the events make me confront my own vision of myself. It gave me a bit of a reality check and forced me to analyze some of my actions that I make that could potentially endanger myself.”

Many female students seem to share the same anxieties about walking alone or at night while on or near campus, especially those who live on the outskirts of the university.

“I feel especially unsafe when I have to take routes outside of campus or backways behind buildings. Also, since I live on North campus, I am usually on edge if I have to stop at a crosswalk next to a car,” Flynn said.

Emily Wagner, a sophomore studying human physiology, described experiences in which she and her friends were harassed while walking home together at night by multiple men in their cars.

“Even on my morning runs I feel I need to visibly carry my pepper spray because the time I didn’t, older men in a car slowed me down and followed at the pace I was running,” Wagner said.

On Oct. 27, the university expanded safety initiatives in order to address concerns about the wellbeing of students around campus. Some of these initiatives included the safety escort program run by the university’s police department, which offers free rides to students traveling between on-campus locations. The university also announced that it would reevaluate and upgrade the blue-light emergency phone system on campus as necessary.

“The safety of our community is our top concern and we’ll be actively driving improvement of all available resources for our students to address that priority head on,” Long said.

“I don’t go anywhere without my pepper spray visible and I keep my head up and try to make lots of eye contact and look attentive, not on my phone or too distracted,” Wagner said.

Something of equal importance to many female students at the university is ensuring the safety of their friends and other women they are around.

“I normally cover my drink at parties and stay with other girls,” Flynn said. “I try to walk with others or find rides home at night if I can. I also track my friends on my phone and they have my location too.”

The anxiety surrounding gender-based violence seems to lurk over the female population on campus. The question of how to address it still remains.

To Hattery, many young women focus their prevention towards the wrong situations.

“A lot of times women focus on people not related to them,” Hattery said. “Your risk for sexual or intimate partner violence is more likely to happen with someone that you know, not with a stranger.”

Women’s focus on protecting each other, although powerful, is also focusing on the wrong prevention styles, according to Hattery. She stated that most women resort to strategies such as going to the bathroom in groups or being aware of each other’s locations because it is the only strategy in which women feel that their safety is in their control.

“The real prevention is teaching men not to be abusive and developing ideologies of masculinity that don’t involve hurting people,” Hattery said. “Women don’t really know how to do that, so they do what they can in order to keep themselves and their girlfriends safe.”

For young women to truly feel safer, Hattery emphasized the importance of young women understanding what early warning signs of abuse and violence look like.

“They’re hard to see until you know where they are,” she said. “They’re often confused with our sense of romance.”

As described by Hattery, one of the red flags is isolation, or when the victim’s social network is shut down by their abuser. Intrusion or stalking is another warning sign. This can involve an abuser showing up unsolicited, or excessive texting and calling. Hattery warns of possessiveness and excessive jealousy.

Hattery also stated that while being aware of these warning signs can help, it is also important for men and women to have open conversations with friends about signs of abuse they may notice around them.

According to Hattery, one of the biggest misconceptions about acts of gender-based violence is that the incidents only impact the people involved.

“We often neglect the impact these situations have on larger communities,” Hattery said. “Around 50% of mass homicides start with intimate partner violence.”

Tackling issues of toxic masculinity rooted behind gender-based violence is more than just a university issue; it is a generational and cultural task. Hattery reiterated that there is still lots of work that must be done in order to address toxic masculinity on college campuses.

“I think we can never do enough,” Hattery said. “It’s always important to do more.”