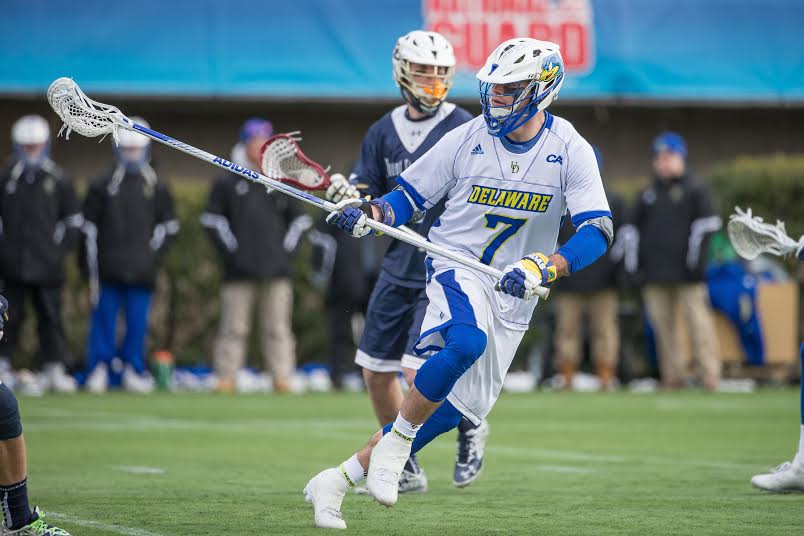 Kirk Smith/THE REVIEW
Elijah Conte’s childhood illness hasn’t slowed him down. Beating a survival chance of 15 percent, Conte is now a fifth year member of Delaware’s lacrosse team, and continues to contribute positively with the Hens.

Not many people would guess that Elijah Conte—captain, fifth-year member and four-year letter winner as a defensive midfielder on Delaware’s men’s lacrosse team—was once told that there was only a 15 percent chance that he’d beat his childhood cancer diagnosis. Now a senior at the university, Conte continues never to take a day for granted.

“I’ve set a couple goals for myself this year, being that I do have the opportunity for an extra year,” Conte said. “I’ve set a goal for myself to put in as many extra hours as I can and see how good I can get. I want to stay healthy and set a very high example for these guys.”

Although Conte was sick as a child, he always loved sports and was chomping at the bit to play any sport that he could. He started playing lacrosse in the fourth grade when his dad came home with a lacrosse stick.

As Conte reflects back on his time in the hospital and his treatment, he mentions that he tries his best to put that time period behind him. However, his experience makes him appreciate how lucky he is to be alive.

“It makes me take a step back at certain points during the day and just say ‘wow,’” he said. “I realized how lucky I am and to have the opportunities that I’ve had after such a life-threatening illness has definitely humbled me.”

Conte is cancer-free, but continues to give back as much as he can to families who have the burden of dealing with cancer diagnoses. He led the team and was among national leaders in fundraising for the HEADStrong Foundation, an organization for cancer patients and families, helping them by providing essential programs and services to improve quality of life.

Over the last two years, Conte has raised nearly $10,000 for the HEADStrong Foundation. He set his first goal at around $1,000. Within 72 hours of fundraising, Conte raised close to $2,500 — a feat that still amazes him.

“It just shows how many really good people there are out there,” Conte said. “I don’t take it as an individual goal — it’s just a credit to everyone who really put their foot forward and donated to help a lot of families that need it right now.”

Conte had almost 100 people donate over the course of the past two years, which he said is a honor to be a part of something that special. In addition to being a part of the HEADStrong Foundation, Conte has also joined forces with the Andrew McDonough B+ Foundation. With this charity, Conte has adopted his own hero and initiated adopting a hero for the men’s lacrosse team as well.

Since day one, McDonough has told Conte, “Listen, you’re the light at the end of the tunnel for these parents. You’re what they’re looking for and if you can meet as many of these families as you can, you’re going to give them some hope.”

His work with the B+ Foundation directly correlates to the kind of culture he has in the locker room with his team, Conte said.

His own hero for the B+ Foundation is his best friend, Will. Battling cancer left Will with physical limitations, whereas Conte avoided any lasting physical problems.

“I know Will says that I’m his role model, but he’s actually mine,” Conte said. “Obviously, he can’t do a lot of the things athletically that I can do, but from an attitude standpoint, he’s 100 times a bigger man than I’ll ever be.”

Despite being in the clear from cancer, Conte remains humble about his journey and wants to do as much as he can for children going through the same situation.

“You find something that you love more than anything else and if for one second someone tells you you’re not going to be able to do it, you need to put your foot down, chase it and never stop chasing it,” Conte said.