Enrollment Ups and Downs: Wesley College’s struggles to fill classes and UD’s efforts to pack them 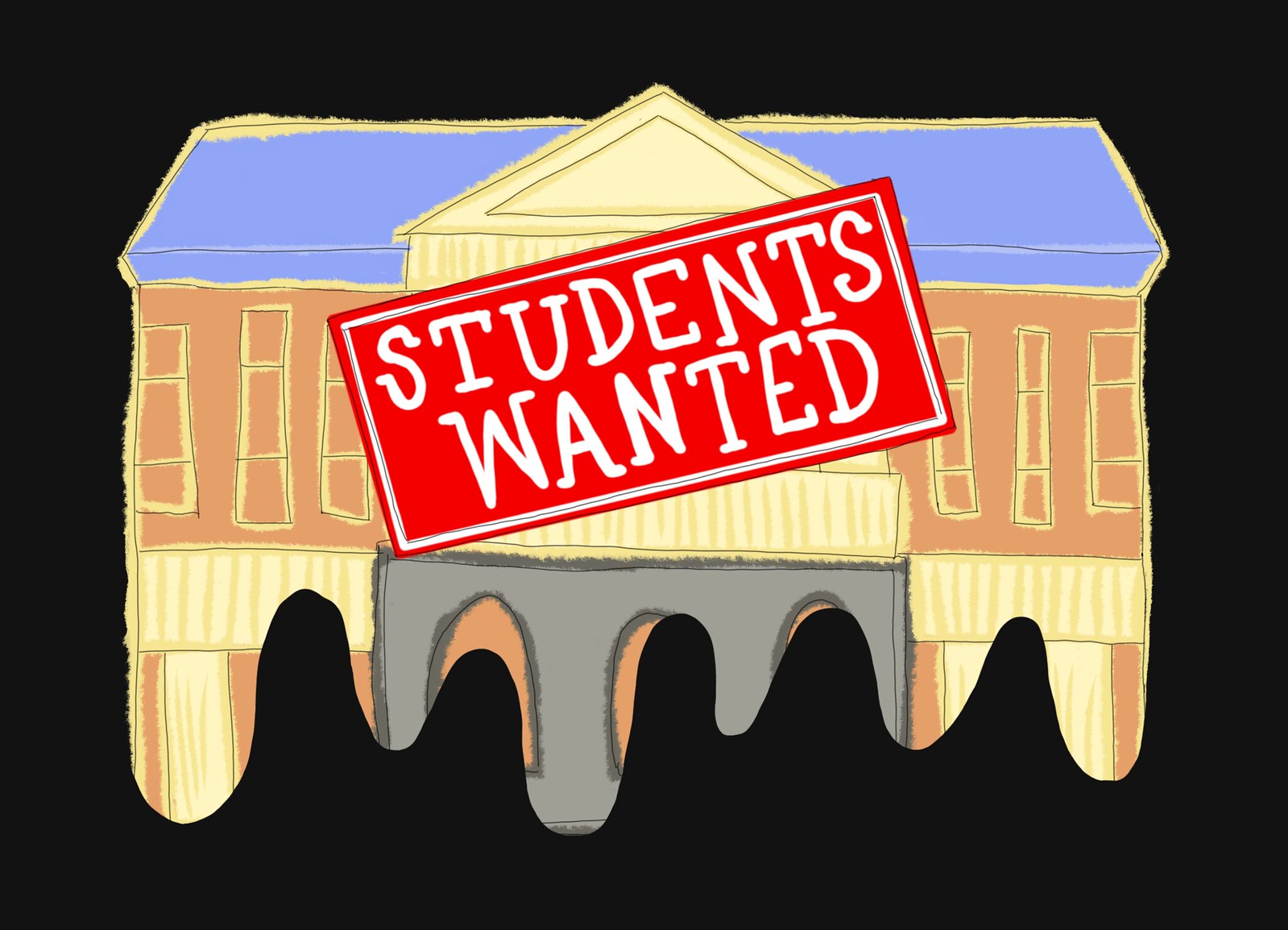 College admissions officers face a Goldilocks-esque struggle: Too many students sometimes, not enough other times.

Downstate, Wesley College deals with the latter difficulty. For the private, liberal arts college, enrollment numbers and subsequently, tuition revenue has continued to decline over recent years. In November, the college submitted a request for $3.2 million dollars from the state government. The group that oversees the higher education development investment fund told the college that “it would not receive any more funding without first submitting a long-term strategic plan to Delaware officials.” The college previously received an award for $2 million dollars in 2019, but its worsening financial situation necessitated this additional request. Although Wesley never submitted a strategic plan, the request was approved for $3 million. The college may draw funds as it needs them, contingent on the fact that it submits no more funding requests from the state, it creates a plan to graduate 200 students in the spring, and it provides weekly updates to the state on the progress toward a merger with another institution.

Robert Clark, president of Wesley, said in the application for the funding that the school has signed agreements with two unnamed higher education institutions that may result in a merger. Matthew Bittle, reporter for the Delaware State News, wrote on Twitter that “Wesley is in talks with Saint Leo University, a Catholic school not far from Tampa [, Florida].”

Two notes for context/that you may find interesting:

Second, the school Wesley is in talks with is Saint Leo University, a Catholic school not far from Tampa. #netDE

“In early 2019 there were exploratory conversations between UD and Wesley,” Andrea Boyle Tippett, the director of external relations for the University of Delaware (UD), said in an email. “Those ended in March. UD has no plans to acquire Wesley College.”

Wesley College resides 52 miles south of the University of Delaware in the state’s capital of Dover. David Bonar wrote in an op-ed for the Delaware State News that the college is “the sole beacon of light in a neighborhood that is infected with blight and poverty.”

The University of Delaware center for Community Research and Service found that the poverty rate of Dover was nearly 7% higher than the state average. Wesley College employs around 200 people in Dover and maintains two public libraries, the Robert H. Parker Library, and the recently acquired Dover Public Library.

Bonar, a former councilman in Dover City Council, wrote that Wesley College plays a necessary role in the higher education landscape of Delaware. “Many students thrive and are more successful there by the personal attention they receive, something they do not get at the University of Delaware, Wilmington University or even Delaware Tech.”

However, some students at Wesley feel differently. In an article in Wesley’s student newspaper, the Whetstone, student Ashli Moore said that “We pay all this money and get nothing back in return.”

Wesley College is not alone in its struggle to maintain adequate enrollment numbers. According to Robert Hampel, professor in the School of Education and historian of education, small, liberal arts colleges throughout the nation face this same dilemma.

Hampel said that a number of factors, including birth rate, the rate at which adults are returning to college, financial aid policies and the job market, all affect enrollment.

A drop in the number of high school graduates in recent years has caused colleges like Wesley to fail to meet enrollment goals.

In the 19th century, the small, liberal arts college used to represent the quintessential American college, according to Hampel.

“People loved this idea of a campus in the countryside with a few buildings… but then we get [this] major [change] as we get into the twentieth century: the rise of a big campus,” Hampel said.

Hampel said people started to realize the breadth of opportunities, majors and sports programs available at larger universities. Furthermore, people cared less about going to a school tied to a particular religious denomination. Advancements like the Common App also allowed students to expand their possibilities for college besides the schools close to them.

“In the last 50 years there has been more concern about the college degree as a credential that’s going to get you something,” he said. “You want to know that for all this money and hard work you’ve got a diploma that’s going to be respected, either by grad schools, med schools, or employers, and in the pecking order of schools, the small liberal arts colleges, except for the very best ones, are not in the top group for prestige and status.”

He said that these factors render it difficult for these types of colleges to attract students, and on top of that they often do not have a large endowment or wealthy alumni to rely on.

While Wesley College’s enrollment has ticked down, the UD’s and other large universities’ have generally increased.

In 2016, President Assanis announced a goal to increase the population of undergraduates by 1,000 by the fall of 2021, which was met with a “difference of opinion,” according to Hampel. The Fall 2019 Undergraduate Enrollment Report said that the university “[is] still on track and [expects] to achieve this goal.”

However, the report cites challenges to reaching this goal, including the “contraction of the pipeline of high school graduates and an “unfavorable geopolitical climate” that may threaten international enrollment.

In terms of international enrollment, China brings in the largest amount of students. The report states that the “geopolitical environment may soon change this reality.” The national relationship with China has been steadily deteriorating.

Nonetheless, the university has continued to grow, as it is now in its third consecutive year with more than 4,000 first-year students on the Newark campus.

However, large universities often scramble to keep up with demands of a growing student body.

UD recently sent out an email to students applying for on-campus housing for the 2020-2021 school year.

“Due to the high interest in on-campus housing, many students will not be able to select their own space and may not receive their assignment until August … ,” it said. “You may want to consider off campus options and we have resources to assist.”

Virginia Tech, more severely, had to house 1,000 freshman in a hotel in response to an unexpected increase in enrollment.

George Washington University, a school that had been growing in enrollment, decided in September to deliberately cut down the number of undergraduates to provide more even services to its students and to deal with the volatility of the market.

“There’s no sort of consensus nationwide among educators about the right size of a campus,” Hampel said. “ Different people have different opinions.”

The question remains if Wesley College will find the right path for stability and if UD’s goal to keep increasing enrollment will truly foster student success.