Four paths, one quartet: Abeo Quartet to study at the School of Music 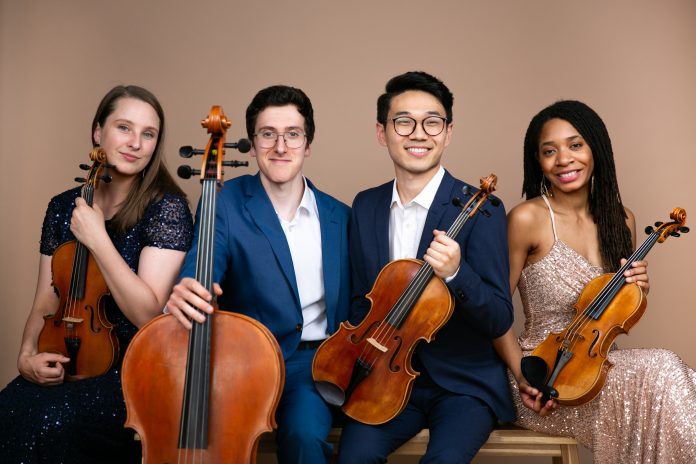 This fall semester, the university’s School of Music is welcoming the Abeo Quartet to study as its first graduate string quartet and be mentored by the university’s string quartet in-residence, the Calidore String Quartet. The Abeo Quartet was originally formed by Njioma Grevious and James Kang in 2018 at The Juilliard School and was reformed with its newest members, Brian Gadbow and Rebecca Benjamin, in the spring of 2021. Grevious and Kang initially created the group after realizing that they wanted to play music professionally.

From their early childhoods to their adulthood musical careers, the members of the Abeo Quartet have all had unique experiences that led them to where they are today.

Brian Gadbow has been surrounded by music his whole life. His mother is a vocal music teacher and his father enjoys playing piano, so his introduction to music was very early. Despite being from a smaller town — Whitesboro, New York — and not having many opportunities to experience chamber music, Gadbow was still enriched musically by his family and school. He decided to play the cello at age eight after he heard his teacher perform the cello for him.

“It was weird because I think about it now, and it’s like a remarkably off-the-cuff decision for me,” Gadbow said. “I usually think a lot about things, but I don’t know. It just, just felt like, ‘Yeah, I’ll do that.’”

Gadbow attended church and was heavily influenced by its Anglican choir music, and his love for Renaissance and classical music grew throughout middle and high school. While studying as an undergraduate at the Eastman School of Music, he played as a principal cellist of the Eastman School Symphony Orchestra and the Eastman Philharmonia.

James Kang, the quartet’s viola player, also came from a musical family like Gadbow, with his father a singer and choral conductor and his mother a pianist. Kang grew up in Atlanta, Georgia, and began piano at age six, as well as viola at age nine.

“As a very Christian family, they got me and my siblings to play in order to play for church,” Kang said. “So I actually was forced to play viola, because they wanted a string trio. I have an older sister who plays violin and a little brother who plays cello, so actually I hated viola. I liked piano.”

Eventually, in middle school, Kang found a love for the sound of the viola and pursued it as his instrument of choice. Kang began to attend youth orchestras and summer music festivals and soon aspired to get into a top conservatory. Kang went on to complete his undergraduate degree at The Juilliard School.

Njioma Grevious began playing the violin at age four when she fell in love with the instrument after watching her older sister play. As she grew and developed her skill, Grevious joined a string-training program in her hometown of Boston called Project STEP, a non-profit organization that provides high-quality music education and financial support to Black and Latino students, who are often unrepresented in the classical music field.

“My mom was a single mom when she raised me and my siblings, and that’s just a huge challenge,” Grevious said. “So it was really great to grow up in an environment like this and have mentors who look like me, because it’s just simply not the case in … the classical arena.”

During her five years as a member of the Boston Philharmonic Youth Orchestra, Grevious went on to perform in Carnegie Hall and Boston’s Symphony Hall. She, like Kang, completed her undergraduate degree at The Juilliard School.

Rebecca Benjamin is from a small town called Warsaw, Indiana, where she did not have access to an orchestra program through her school. When she was studying violin, starting at age three, she frequently had to travel several hours out of her town to receive a music education and exposure to music. However, that did not lessen her passion for music.

“Back when cassettes were a thing,” Benjamin said, “I had this set of Mozart Violin Concerto No. 3 that I was obsessed with and I would play every day on my Little Tikes cassette recorder for my friends.”

From the Fort Wayne Philharmonic Youth Orchestra in middle school to a fellowship from the Music Institute of Chicago in high school, Benjamin spent a great deal of time and money on expanding her musical education. Support from her teachers helped her to audition for, and ultimately attend, the Cleveland Institute of Music for her undergraduate degree as well as her master’s degree.

Now, for their next venture, the members of the Abeo Quartet have chosen to study at the University of Delaware in order to be mentored by The Calidore String Quartet. Benjamin expressed that in the ever-changing world of classical music, studying with musicians who “really get what it takes to become a professional string quartet, here and now, is really exciting.”

Currently, they rehearse daily as a quartet in order to build their repertoire and enhance their technique for future competitions. While the group members all come from different backgrounds, be it playing music for church or driving three hours for orchestra rehearsal, their passion for chamber music, fostered in them when they were young, is taking on a new dimension as they professionally pursue music together.

The Abeo String Quartet’s first recital at the university will take place on Dec. 1 at 5:30 p.m. in Gore Recital Hall in the Roselle Center for the Arts.