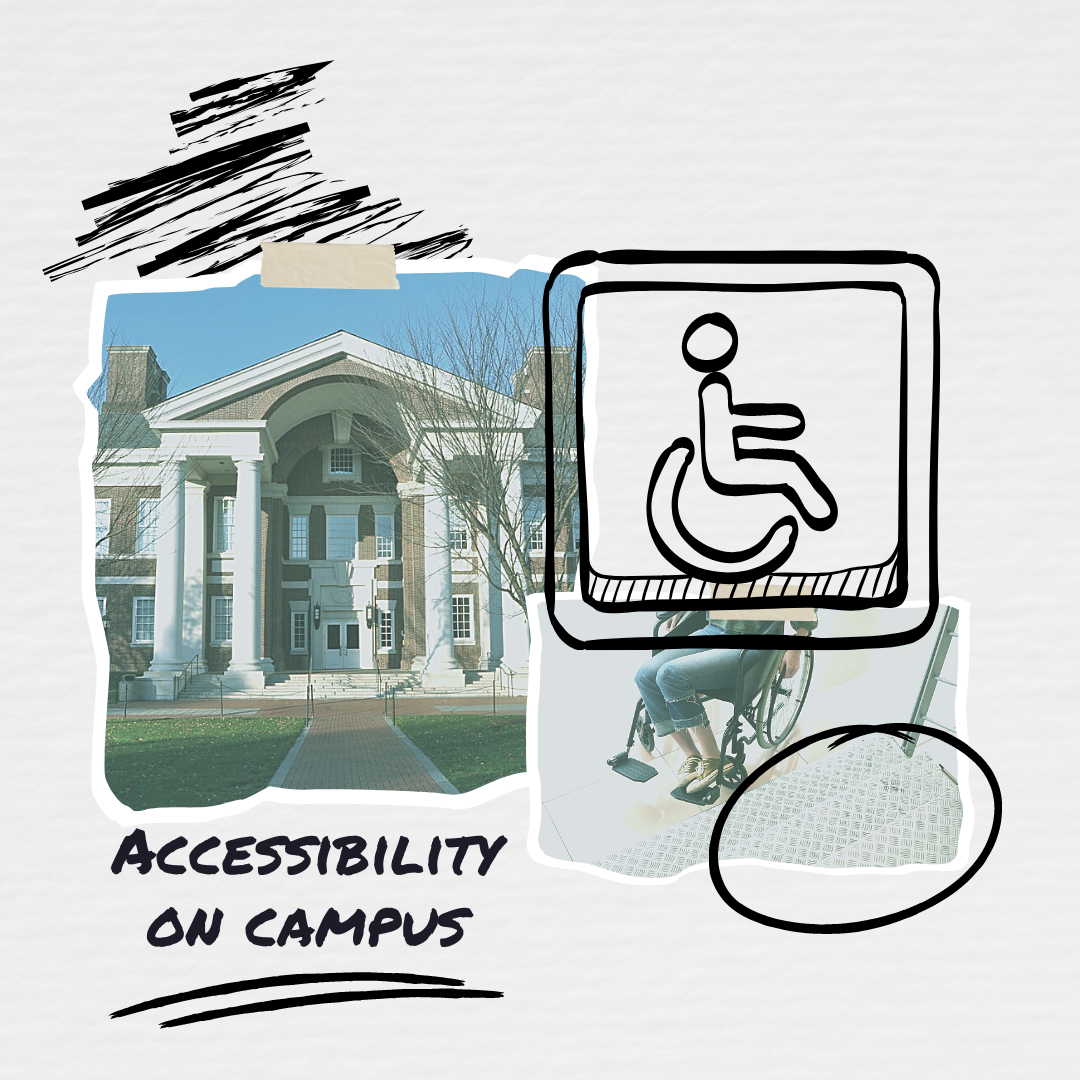 On March 11, the university posted a photo of Gore Hall on their Instagram page. Capturing a bird’s eye view of the interior of the academic building, the caption describes its atrium as a “dramatic marble rotunda with an oculus window.”

However, many users commented on the university’s lack of addressing on-campus accessibility for students, especially those with physical disabilities. The students claimed that Gore’s elevators work some days and not others, making it difficult for some students to get to the second and third floors.

“Ahhh, what a lovely study space for abled bodies,” Alexis Cervantes, a junior environmental studies major at the university, commented. “Imagine if Gore was accessible to everyone and the elevator wasn’t broken every single day 🙃 Get it together.”

Cervantes, who was diagnosed with juvenile rheumatoid arthritis at the age of 11, detailed her particular commute to Gore. Rather than using the elevator, Cervantes said she walks across the street and uses the Smith Overpass in order to get to her second-floor class, hoping to avoid feeling pain — “flare-ups”— in several parts of her body.

“I really have trouble going up the [Gore] stairs, I commented from my own experience,” Cervantes said. “During February, I was having difficulty because of my own arthritis in my knees.”

The comments on the university’s Instagram page were not unfounded. On the morning of March 17, days after the Instagram photo was posted, one Gore elevator was filled with smoke caused by a fire in the electrical room.

“They obviously didn’t fix something right for the fire to happen,” Cervantes said.

Cervantes emphasized that Gore, which opened in 1998, is a testament to the university’s outdated approach to accessibility.

“It was built in 19-something so we don’t have an elevator and there’s not even an accessible entrance to the building even on the first floor,” Cervantes said. “Like, every single entrance has stairs.”

Isabella Haigney, a first year criminal justice major with muscular dystrophy who frequently uses a walker for her mobility, previously had two classes in Gore during the spring semester on the second and third floors, respectively. Unable to climb Gore’s stairs with her walker, Haigney shared her reluctance to use the building’s elevators.

“My one class that was on the second floor I went to one day and the elevator was broken,” Haigney said. “I told my TA and my professor, and it was communicated to the elevator company and [Disability Support Services (DSS)]. Then nothing really came of it and I couldn’t go [to class] ever.”

In one incident, Haigney was unable to get down from the third-floor classroom one evening because of the broken elevators. With only her professor there to help, Haigney resorted to calling 911 and getting assistance from police and emergency medical technicians, who carried her down the stairs.

After what Haigney called a “scary experience,” she began to speak to staff at the Office of DSS  to receive physical accommodations for this issue. After weeks of back-and-forth conversations between Haigney, her class’s teaching assistant (TA) and DSS, official arrangements were made to move both Gore classrooms to Memorial Hall and Kirkbride Hall.

“This really bothered [my TA], and she was incredible,” Haigney said. “She was emailing the head of her department and asking who else we could go to to get this done.”

Elizabeth Reed, director of DSS, Americans with Disabilities Act and Section 504 at the university, said in situations such as Haigney’s, DSS typically calls the university’s Facilities, Real Estate and Auxiliary Services and Registrar’s Office to alert them of the situation. However, according to Reed, there are plenty of factors to consider when making student accommodations.

“We had to move multiple classrooms to get a combination of needs met for one, but we also have to take into consideration the group that’s already in that classroom,” Reed said. “Does anybody in that room have accommodations as well? Sometimes it’s a little bit of a chess match, trying to figure out where they go.”

Reed cited that an engine motor for the elevator, which facilities have been waiting on for months due to material shortages, would fix Gore’s elevator problem. She said that there are some external factors that are out of DSS’s control, but the first step is knowing if and when a disabled student needs accommodation.

“There’s quite a few folks on campus that we wouldn’t know they were having an access problem,” Reed said.

Mirroring this sentiment, Mandy Zicherman, a physically-disabled student and junior studying entrepreneurship and disability studies, said that the university does not have much of a visible disabled community on campus.

Although she found the staff at DSS helpful in accommodating her needs, Haigney agreed with Zicherman that the lack of a community makes it more difficult to get help.

“They weren’t telling me if anyone else was experiencing this and it really didn’t even seem like it because there’s just no urgency,” Haigney said. “It seems as if only one student is being affected by this, then it doesn’t really matter.”

In addition to the elevators, the university’s on-campus construction is a challenge for physically-disabled students like Haigney to navigate.

“There’s nothing [the university] can do about the construction, but like the intersection between Trabant and Kirkbride I can’t use right now,” Haigney said.

Zicherman began a social venture during her sophomore year to address the problems disabled students currently face. After interviewing many members of the university about their experiences with on-campus accessibility, she identified having an accessibility map as the solution.

This map, which is currently in the works, is planned to be a digital, interactive experience where members of the university community can see which places and events on campus are and are not accessible.

In 2021, Zicherman entered her map, “Navigating Access,” into Horn Entrepreneurship’s 2021 Hen Hatch startup funding competition, in which she became a finalist. According to Reed, DSS has “looked into” Zicherman’s venture to implement her map for real use.

As a disabled student, Zicherman finds that both advocating for oneself and others is important in getting needed resources.

“It’s definitely important to have a community of people who would be there to represent the needs and interests of the disabled members of UD’s community,” Zicherman said.

According to all three students — Zicherman, Haigney and Cervantes — being completely or partially disabled comes with challenges. However, it does not stop them from completing their education at the university or having positive experiences.

“And [being in] college has been really good, the hardest part just has been navigating the campus with my disability,” Haigney said.