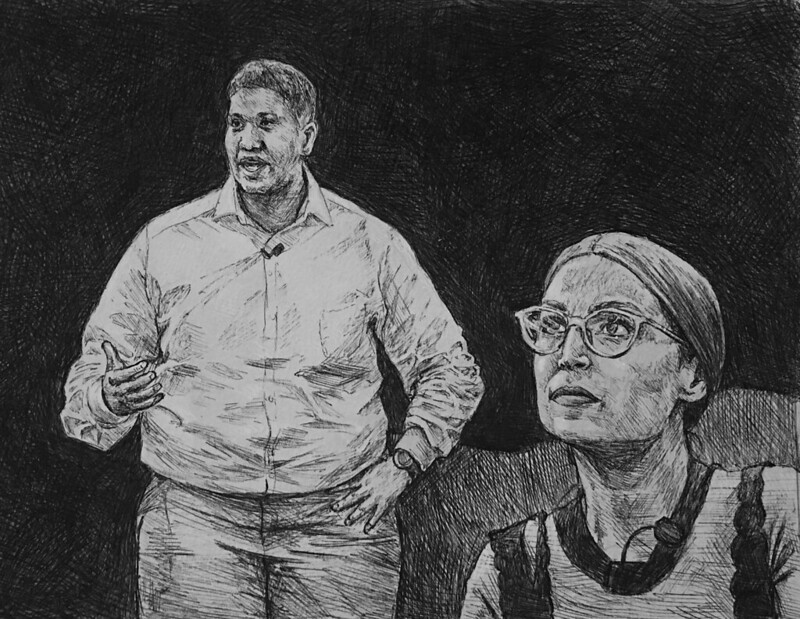 Sam Ford/THE REVIEW
Democratic primary candidate Kerri Harris, who was joined by Alexandria Ocasio-Cortez, stood to address the crowd at a two hall on Aug. 31.

Until recently, she rarely thought about the jar. Then, the realities of campaign funding hit her, and she needed gas money to drive to reach her constituents.

Harris told this and other stories at a town hall held in the Trabant multipurpose room on Aug. 31.

Attendees provided the campaign with their name and contact information at the door before they were given the wristbands that allowed them to enter. A spokesperson for the campaign said via email that this was done in an effort to ticket and identify Harris’s supporters.

After introductions from Wallace, Ocasio-Cortez began by introducing both her progressive platform and Harris, whose campaign, Ocasio-Cortez later said, mirrors her own.

“This is what democracy looks like,” she said, studying the audience of approximately 400. “There’s every race, sexual orientation and gender in this room.”

Harris later asked the attendees to stand and shake hands with the people around them.

“When [politicians] tell you to fear people because of what they look like or what religion they practice, tell them you shook their hand in here today … and you felt love,” Harris said.

After Harris’s speech, moderator Wallace presented pre-approved questions to the candidates, who discussed Medicare for all, free college tuition and raising the minimum wage, among other topics.

Ocasio-Cortez explained her theory that such programs will assist those who are struggling without hurting the already wealthy, thus benefiting the majority of the economic spectrum.

“These are investments that create more wealth for the working people in the United States of America” she said.

Both Ocasio-Cortez and Harris encouraged those interested in politics to get involved and that “myths” of necessary age and experience should be ignored. Harris said that while politics are not easy, those interested in being involved should “laugh” and “step over” any obstacles they face.

During their talk, Harris and Ocasio-Cortez said they don’t want to label policy as “left” or “right.” Rather, they want to make it the people’s policy. To bring people together, Harris said, she wants to stop the disparagement of different ideas, and focus on working with others to get results.

In recent weeks, however, the Harris campaign has taken to direct criticism of Carper— Harris’s website directly compares her stances on numerous issues to Carper’s, and in a debate held last week, she stated that Carper’s experience has failed to help his working-class constituents.

Nonetheless, Carper was not featured in the town hall, which focused on Harris’ platform and progressive values.

Bailey Weatherbee, president of YPDA, the student organization that hosted the event, explained what she believes to be the backbone of the progressive ideas presented.

“To be a progressive is to hold the belief that every person deserves policy written with human dignity in mind, where we treat people like people, we don’t put corporations first and that we allow human beings to be human beings and to be treated as such,” she said.