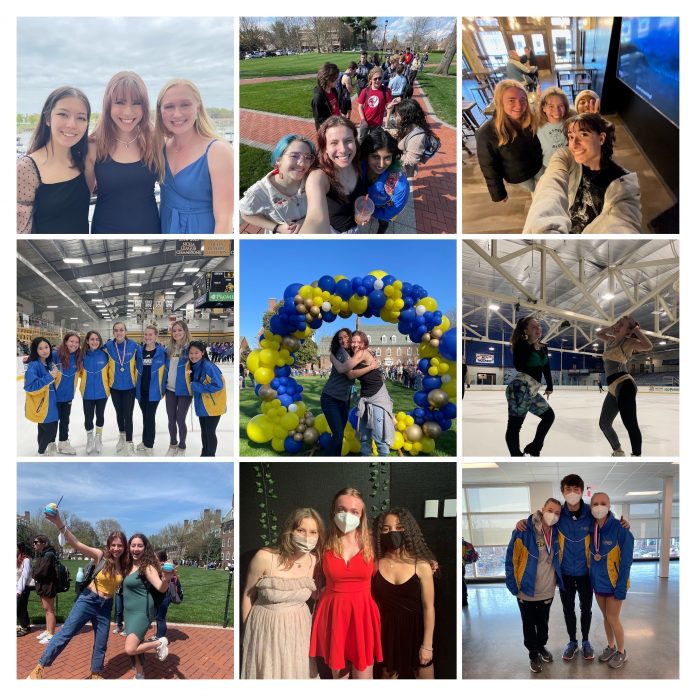 My first-year experience at the university has been an absolute whirlwind. There have been a lot of highs and lows as well as many funny stories to pocket for later. I entered the university as a climate scholar, competitive figure skater and a biochemistry major in the Honors College. I lived on the fourth floor of Louis Redding Hall on East Campus, one of the newer dorms on East Campus with both air conditioning and elevators. I lived right next to my floor’s bathroom which felt like true luxury. I instantly became great friends with my roommate and the other people in my floor section.

The day before fall classes started, I sprained my knee during figure skating practice and got the opportunity to take a fun trip to Christiana Hospital. I ended up stranded at the hospital for several hours because the university had recently scrapped its hospital transportation services, so I begged some students I had just met to come to pick me up. I missed the involvement fair and returned to my dorm with a massive leg brace and crutches. On the bright side, I started to get a lot of compliments on my outfits because people felt bad for me when they saw me hobbling around campus.

While on crutches, I decided to take advantage of the university’s free medical transport service. I learned fairly quickly why it was free. Medical transport would often run late, not show up or get lost trying to find one of my classes. There were several days when the driver would simply give up and drive me back to my dorm because they could not find the building I needed to go to. Sometimes I got the impression that these drivers had never seen the campus before, even though driving around campus is supposed to be their specialty.

During the second week of school, I received an email saying that one of my packages failed to be delivered. I instantly panicked when I received this email and filled out a form with my credit card number, address and social security number so I could get the package redelivered. I did not know what the package held but I felt that I needed it.

In the heat of the moment, I had not paused to think that I was giving away my entire identity to a scammer. Shortly after, I realized my idiocy, changed all of my logins and locked my credit card. I unfortunately never found out what the package was, but I did not end up getting my identity stolen and that’s probably the more important takeaway.

On the fourth week of school, I joined the club figure skating team. I had not been able to join while I was injured because I could not physically attend practices. My crutches era was over and I felt like a new woman. I learned the pain of having to wake up at 5 a.m. for team practice while learning the joy of being around people who love your sport just as much as you do. The comradery that I have experienced on this team is one of the highlights of this school year.

During the spring semester, I tried to prioritize extracurricular activities and mental health. While there were several personal obstacles that presented themselves along the way, I made a lot of great memories during this semester. I participated in four collegiate skating competitions, became a social media ambassador and started writing for The Review.

Becoming a social media ambassador has been an extremely beneficial experience because I have learned how to become more involved in campus life and become more connected with the student body. I will continue to use this opportunity to reach my peers and exchange ideas for ways to better enhance our university experience.

In such a short time, I have built a vast foundation for my college and professional career. I have been given numerous opportunities to connect with faculty members and explore my wide range of academic interests. I hope to continue to explore many fields of interest beyond my major to create a more sophisticated foundation for learning as well as better inform my career aspirations.

The university has satiated my hunger for knowledge yet neglected my hunger for nutritious meals. Eating at the university has been the most questionable experience that I’ve had this year. As a vegan, I feel both loved and hated by dining services. There is a moderate selection of vegan options, but more often than not they taste awful or are not actually vegan. The dining halls have yet to figure out how to fully cook tofu, rice or pasta noodles. Every vegan item was either too crunchy, too soggy or completely bland. Eating an allegedly vegan item was always a leap of faith and often ended in disappointment or nausea.

Overall, I’ve had a very positive experience at the university. I’ve enjoyed most of my classes, I’ve had an exceptional living experience in Redding Hall and I’ve made amazing friends. Every day that I spend at this university, I fall more in love with the campus and the people here. Looking at this year’s graduating class fills me with glee, and I’m very excited to continue my journey toward graduation.

Shayna Demick is a columnist for The Review. Her opinions are her own and do not represent the majority opinion of The Review’s editorial staff. She may be reached at sddemick@udel.edu.