Out Loud: 12 hours in Philadelphia 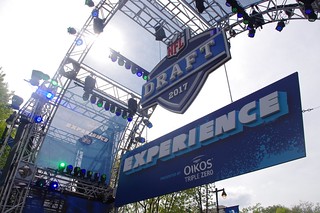 Photographer’s Katie Nails/THE REVIEW
Katie discusses covering the NFL Draft in Philadelphia. She learns what it is like first hand and the true nature of Philadelphians.

Last week, I took a trip to Philadelphia along with my peer, Jack Roberts, to see the NFL Draft, but I ended up seeing the city in a new way.

By the day of the draft itself, Jack and I had only spent a handful of hours together, and did not know all that much about each other outside of the fact that we worked well together, which led us to accept a reporting assignment together covering the draft.

Our plan for draft day was to drive to the University of Pennsylvania, park there and take a train into Center City. As it turns out, one of the first things we learned was that Jack and I are two people with equally futile senses of direction.

This resulted in us taking the better part of an hour to realize that the train station we had been desperately searching for was about 50 feet to the right of the parking garage where we began our journey.

The whole ordeal left us sweaty and also incredibly flustered, which may be why we made the poor judgement call to bring Jack’s laptop with us as we boarded the train and headed into Center City.

The laptop was not allowed in the venue, and we were immediately turned away at the gates.

It was decided that I, being the more public-transportation savvy of the two of our bumbling duo, would take the computer and leave Jack to begin interviewing people at the event.

It was only after I trekked back to UPenn, dropped the laptop and returned — a feat that took me an impressive one hour and fifteen minutes — that the day truly began.

What a day it was.

After roaming the grounds of the fan events for some time Jack and I decided to head toward the outdoor draft stage and wait.

We spent the rest of our time standing in one area in order to preserve our spot close to the stage.

Time was passed watching the men around us guzzle beer and engage in verbal debates amongst themselves. I managed to draw quite a bit of attention to myself, as I was the only woman, it seemed, in a sea of men who were also waiting in the first few rows.

The people were gritty and unapologetic, but there was an unmistakable sense of camaraderie – regardless of teams supported — that stemmed from pride in their city.

Once Jack and I were able to get through the rough exteriors, we found that most of the people there were incredibly genuine, and we made friends.

We lamented with the people around us about our sore feet and legs. We debated with a Cowboys fan who swore he had more knowledge about football than the entire crowd combined. We exchanged LinkedIn information with fellow students.

An Eagles fan heard we were journalists without press passes and helped us move closer to the stage by pretending to be a rude bystander and “accidentally” shoving us into the crowd ahead.

He also suggested that I find two men to hoist me up — just one would be awkward, according to him — so that I could get better shots with the camera we had brought.

We waited some more.

Despite living in the suburbs of Philly for the vast majority of my life, I never quite considered myself a Philadelphian, as many who grew up in my area did. Perhaps I don’t visit the city enough, or perhaps it’s because my parents are not from the area.

Regardless of the reason, I was thoroughly surprised that when the draft began nearly three hours later, the crowd booed at nearly every person to step foot on the draft stage.

It did not seem due to animosity, however, because the Philadelphians booed their own team’s choice as well as others. It seemed to be happening “just because.”

After the Eagles made their first-round pick, it was clear that the crowd had gotten bored, or maybe tired, and the venue emptied.

After leaving the event Jack and I honored the draft’s Philadelphia location with a celebratory Wawa run. After 12 hours spent on our feet, hoagies had never tasted so good.