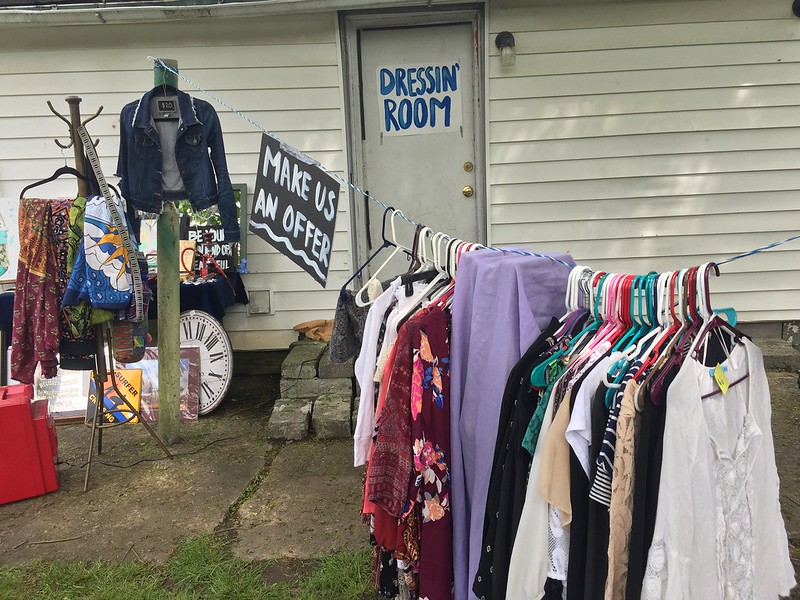 Sage Schwer has a knack for second-hand shopping — what one may see as junk, she sees as a treasure.

As a senior fashion merchandising major, Schwer has been exposed to many aspects of the fashion industry, particularly the harsh effects clothing manufacturing has on the environment. This passion for clothing sustainability, paired with her dream to own her own store, spurred Schwer’s most recent project: “Porch Finds.”

On Saturday and Sunday, Schwer transformed her backyard into a thrift-shopper’s dream. “Porch Finds” offered a compilation of the clothing and vintage items Schwer and several of her friends put up for sale. As students shopped around and mingled with friends, local band Hotbed jammed out to complete the uplifting ambiance.

“I wanted to take away the negative connotations people have with second-hand,” Schwer says.

While much of the fashion industry is monopolized by fast-fashion businesses, Schwer emphasizes the importance of recycling or repurposing clothes to eliminate the magnitude of clothing waste.

Fast-fashion, as Schwer defines it, is “clothing retailers that are pushing out so many clothes for super cheap and poor quality.”

This has an extremely negative impact on the environment, from not only the ways in which these brands are manufactured, but also with the accumulation of clothing waste in landfills. People cannot typically donate clothing purchased from these retailers because they were not made to last and fall apart quickly. 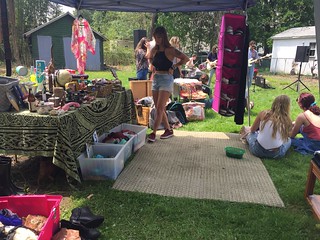 “A good alternative for being more environmentally friendly when it comes to fashion is buying second-hand because whatever impact it made it did a long time ago,” Schwer says. “That’s why I wanted to take away the negative connotation of it. You’re essentially recycling when you buy second-hand.”

Senior Cassidy Kellagher, a friend of Schwer who also played a major role in putting together “Porch Finds,” says that promoting environmental consciousness is very important to her.

Kellagher changed her major from fashion merchandising to public policy to focus more on environmental policy and animal rights.

“We dedicate days to go to different thrift stores to find items that other people wouldn’t find,” Kellagher says. “We really put a lot of effort into what we’re selling.”

The duo has learned a lot since their previous two “Porch Finds” sales. This third time around, they were able to tag each individual item to ensure proper organization, and accumulated a greater amount of merchandise, which allowed them to move the event from their front porch to their entire backyard.

“I’m really proud of Sage,” Kellagher says. “She just started out with a small idea and has brought it from just a porch to a huge backward experience. She’s really done so much. It’s awesome to see her dream come alive.”

Along with the items that Schwer and Kellagher have found and repurposed, “Porch Finds” also sold jeans from a student-run pop-up shop, AndAgain.

As for the future, Schwer says she hopes to own her own vintage store or consignment shop, but would love to expand upon “Porch Finds” if given the opportunity.

“I was personally hoping that somehow in the future this could grow into something more,” Kellagher says. “It will always be in the back of my mind as something we can do in the future.”

While both say they hope the attendees of “Porch Finds” enjoyed their time spent, they also hope they were able to offer a new perspective on buying second-hand clothing.

“Having an event that’s basically supporting us going in a positive direction for consumerism is just really important to me,” Schwer says. “Spreading awareness is a really big deal. I’m exposed to it a lot in the fashion industry, and my friends all know about it because I talk about it, but most people have no idea.”